2:17 PM +Mark_RH: Hi, I am Mark Rein•Hagen, and I created the World of Darkness, Vampire: The Masquerade, Werewolf: the Apolocalypse, and many other games.

2:17 PM +Mark_RH: I also founded White Wolf Games and was an investor in WoTC and on the board of directors for a while.

2:18 PM +Mark_RH: My TV shows Kindred was on FOX, until it got cancelled, but it a computer games based on my work and idea that is my callling card in the part of the world where I live now.

2:19 PM +MC: Mark Celio–Coordinator/design/writer for Lostlorn, working with and for Mark Rein-Hagen  Hello all.

2:19 PM +Mark_RH: What I am working on now, with a large group of very talented designers, writers and artists is a kind of dark fantasy World of Darkness.

2:20 PM +Mark_RH: And its not really like anything that has been done before.

END_OF_DOCUMENT_TOKEN_TO_BE_REPLACED

7:43 PM +Bret: My name is Bret Kramer and I’m the editor of Sentinel Hill Press.  We are primarily a publisher of Call of Cthulhu RPG material, with a focus on the town invented by Lovecraft – Arkham, Innsmouth, Dunwich, etc.

7:44 PM +Bret: I was also the editor of the Masks of Nyarlathotep Companion and I wrote the scenario “Last Things Last” which has served as many people first Delta Green scenario (as it was included with their quickstart rules set)

7:51 PM +GeoffGander: My name is Geoff Gander, and I am one of Bret’s enthusiastic freelancers. I’ve been working with him for….2 (?) years or so. My contributions to Sentinel Hill will appear in forthcoming issues, starting with Issue 4 (which focuses on the eerie port town of Kingsport).

7:51 PM +GeoffGander: It all started with one little article….

END_OF_DOCUMENT_TOKEN_TO_BE_REPLACED

7:33 PM +Pat: My name is Pat McNary and i am the lead game dev for Orcs Unlimited games. we are currently working on the Kickstarter for Brass Rings a game of exploration on the rings of Saturn, as rodents.

7:34 PM +Pat: the world is a fantsy/ Steampunk version of reality so the rings have gravity water atmosphere and the other things of life. Done

END_OF_DOCUMENT_TOKEN_TO_BE_REPLACED

2:04 PM +GMDOnline: Hi everyone I am GM Draeus founder of GMD Online a small family run games design company based in UK.  I am here to day to talk about our latest kickstarter CORE RPG: Vehicles & Mounts Guide. The CORE RPG is a universal RPG qith fast cinematic action that keeps the game moving and exciting.

2:05 PM +GMDOnline: Also please bear with me I have a new keyboard and it feels weird…

END_OF_DOCUMENT_TOKEN_TO_BE_REPLACED

Posted by saintnexan on July 25, 2020
Posted in: Uncategorized. Leave a comment

So the other day a superhero flies through the window into my office. Cape, boots, underwear on the outside, the works. The fella even had a logo on his chest: “CP”.

“Uh, yeah?” I says, kinda expecting him to call me “Citizen” or some-such.

“Review copy for ya,” he says, dropping a book on my desk. “Dark Times,” says the cover.

“It’s a megacorporation, wise guy,” he says. “Got my powers from’em.”

“Megacorps makin’ supers?” I says. “What kinda superhero game is this, anyway?”

“Cyberpunk superheroes?” I says. “Now that’s a heckuva mashup. This I gotta see.”

“Good,” he says. “Now, if you’ll excuse me, I have to fly. People out there have to know how great Chimera Pharmaceuticals is!”

“They call me… Spokesman.” 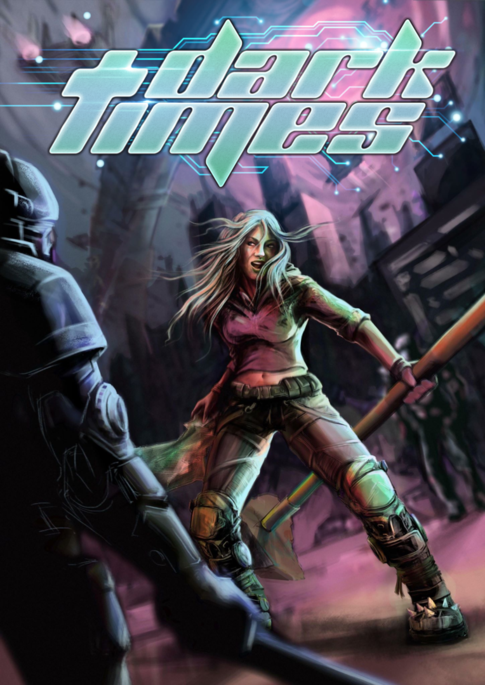 END_OF_DOCUMENT_TOKEN_TO_BE_REPLACED

7:31 PM +Ben_Redmond: Hello everyone, I’m Ben Redmond. I’ve been writing RPG material since 2000, both self-publishing as Malladin’s Gate Press and more lately as the Black Orifice, and freelancing for Goodman Games and Paradigm Concepts.

7:31 PM +Ben_Redmond: I guess if there’s anything you may have heard of me for it’s Etherscope, which was published by Goodman Games back in 2005/6 and achieved nominations for a few different awards.

7:31 PM +Ben_Redmond: Most recently I have released a brand-new original game, Newtonium Engine, which is available now on DriveThruRPG.

7:32 PM +Ben_Redmond: The players are Augmented humans, who have a special clockwork device grafted onto one of their internal organs, called a Newtonium motor that grants them super powers and the ability to channel powerful magical forces.

7:32 PM +Ben_Redmond: At the core of the system and magic in the setting is the four humours theory of medicine. In this theory health and temperament are a feature of the different levels of these four humours in the body: blood, phlegm, black bile (or gall) and yellow bile (or choler).

7:33 PM +Ben_Redmond: In the game, each of these humours has a virtue, a vice, a classical element and a magical discipline that it favours. Having a Newtonium motor grafted to a particular organ enhances a character in one of these humours and all the linked aspects.

7:33 PM +Ben_Redmond: So, for example, a character with a Newtonium motor grafted to their spleen has the ability to control fire, enhanced mesmerism rituals and improved valour, making them braver, more assertive and confident. However, the linked vice is wrath and they will find their anger tricky to control.

7:33 PM +Ben_Redmond: Elemental powers use a really flexible system where players can build their own effects by manipulating different parameters to mechanically describe the effects that they are trying to achieve.

7:33 PM +Ben_Redmond: The game also has a unique dice mechanic that, in addition to generating a number that determines success, it also generates different trigger effects. The triggers can boost yourself or an ally in some way, mess with an opponent or speed up extended tasks.

7:34 PM +Ben_Redmond: Overall, it’s quite a traditional style of game, yet has plenty of unique mechanical aspects and enough flexibility to allow players to play that role in developing the story that you have with more modern narrative-focused games.

END_OF_DOCUMENT_TOKEN_TO_BE_REPLACED

2:26 PM +MortenFausing: Hi everyone!  My name is Morten Fausing and I am one of the writers for Sinful RPG by Luudos Studio. Sinful RPG expands on the universe of Sins, the infernal deckbuilder. With artwork by Darryl Petrucci and exciting lore, we hope to bring you into the world of Sins. In the world of Sins individuals draw power from the seven sins to gain dominance over the rea

2:26 PM +MortenFausing: lms. From the political games of the prideful rulers in the realm of kings, to the fight of survival between destructive wrath beasts in the realm of common beasts. We hope to bring an universe with a rich narrative that lends itself to personal stories of stakes and consequence.

END_OF_DOCUMENT_TOKEN_TO_BE_REPLACED

7:36 PM +Alphinius: Hello friends!! I am Alphinius Goo. I am a long term creative person in the advertising field… a writer… and one of the founders of the Game Company Gooey Cube.

7:36 PM +Alphinius: Gooey Cube is a company that makes what we call… Immersive Adventures.

7:36 PM +Alphinius: Our goal is to make a Game Master’s life far easier while we help said Game Master better enthrall their players.

END_OF_DOCUMENT_TOKEN_TO_BE_REPLACED

7:34 PM +Marcin_Kuczynski: Ok then. We’re Marcin and Kaśka (Martin and Kate). We’ve been married for… erm…

7:34 PM +Marcin_Kuczynski: And we make games together since the late ’90s

7:35 PM +Marcin_Kuczynski: We designed a few ttrgps, however, Defiant is our first game in english

7:36 PM +Marcin_Kuczynski: Kate has written Reimagined: Fanfic Role-Playing Game before, but it was her solo project

7:36 PM +Marcin_Kuczynski: The Defiant were all once a part of the apocalyptic forces that were supposed to annihilate the mortal world, but decided to turn against their overlords and carve their own path.

7:37 PM +Marcin_Kuczynski: There are four Origins (types) of Defiant: the Angels, the Daeva (the gods of old), the Infernals (demons who escaped hell), and the Leviathans (dragons in human forms).

7:37 PM +Marcin_Kuczynski: In Defiant, each Chronicle is set in a single Domain, a mortal city governed by the Defiant. The Characters are all members of Defiant Royalty. They have their own supernatural subjects and Holdings to govern.

7:37 PM +Marcin_Kuczynski: Defiant RPG comes with its own ruleset, to best fit the types of stories it’s been designed for – stories of intrigues, over-the-top parties, searching for secret apocalyptic cults and learning what it means to be a good leader.