<+darrenwatts> Hi everybody! I’m Darren Watts, rpg writer, and I’m here tonight to palaver about Explorers Of The Fantastic! It’s a new setting book for Savage Worlds Adventure Edition, by myself and Jess Nevins from Battlefield Press, and it’s been described as “the love child of Jack Kirby, Gerry Anderson and Godzilla” which I think is a pretty nice elevator pitch. (done)

END_OF_DOCUMENT_TOKEN_TO_BE_REPLACED

<+Apocalyptic_Chuck> Hello everyone! My name is Chuck Rice, and I’ve been working in the games industry since 2000 or so. In that time I’ve written over 100 RPG products, mostly for d20, but AD&D was always my first love, and I have a campaign that’s over 20 years old. I’ve been working on the City of Solstice for several months now.

<+Apocalyptic_Chuck> I’m currently in the midst of crowdfunding a professional version of the campaign on Kickstarter.

<+Apocalyptic_Chuck> So the short version of the campaign is that it’s “The Untouchables” in a fantasy world.

<+Apocalyptic_Chuck> 10 years ago, on a night without a moon, where stealth was rendered more powerful, 5 criminal families killed the Earl and took over the city. Since then, they’ve outlawed magic, and the worship of all gods except Mother Moon.

<+Apocalyptic_Chuck> The PCs in the campaign are the city watch. The first words of the book, which help set the tone, are these: You are not adventurers.  They’re dead.You are members of the Vigilant, a thoroughly corrupted effigy of a once proud guild, charged with keeping order in a chaotic city of 100,000 souls. You are not adventurers. But you have a duty.

END_OF_DOCUMENT_TOKEN_TO_BE_REPLACED

Posted by saintnexan on October 27, 2019
Posted in: Q&A, Uncategorized. Leave a comment

<+DMFitzgerald> I thought it was tomorrow

<+DMFitzgerald> I cannot make it tomorrow..

<+DMFitzgerald> I have a class

<+DMFitzgerald> But I am here now!

<~Dan> Oh? Sorry to hear that. But feel free to talk about your project now if you like!

END_OF_DOCUMENT_TOKEN_TO_BE_REPLACED

<+Russell> The year is 2670. Humans live throughout our solar system, now called SolSys1. Scratching out an existence and reaching into the black where we learned to better prepare ourselves. Each scientific advancement, exploratory venture, exoplanetary discovery, and landing came at a humbling cost. It’s an exciting thought to think and seek for life out

<+Russell> there, the confirming of it isn’t always the same feeling.

END_OF_DOCUMENT_TOKEN_TO_BE_REPLACED

<+TimBrannan> Great.  Hi my name is Tim Brannan and I am Jason’s writing partner for NIGHT SHIFT.

<+TimBrannan> Jason and I have been working together for years.

<+ELG_JasonVey> We’re here to talk about our new rpg, Nigh Shift: Veterans of the Supernatural Wars, now in Kickstarter! /done

<+ELG_JasonVey> (sorry, Night Shift. My keyboard is being goofy)

END_OF_DOCUMENT_TOKEN_TO_BE_REPLACED

<+Ed_Jowett> Ed here from Shades of Vengeance, back again!

<+Ed_Jowett> I love detailed and intricate universes and the chance to create one is not something I lightly pass up. I’ve also been able to re-assemble many of the awesome team who have brought games like Era: The Consortium and Era: The Empowered to life!

<+Ed_Jowett> The new game is Era: Lost Legend, and it’s probably most easily described as my love letter to Final Fantasy. I’ve enjoyed those games since I picked up the first one, and have played some of them more times than I am entirely certain of.

<+Ed_Jowett> I’ve worked very hard to make a world with all of the things that fans of the games will want to see, from various kinds of monsters and a reason for their existence to a world-ending plot (of various kinds), sinister villains, “summons” (in a sense!), magic, technology and more.

<+Ed_Jowett> Mechanically, there are a few interesting bits and pieces, because it allows pairings of players to play as a Corporeal (the kind of characters one might usually play is in the games, complete with oversized swords, etc) and as an Ethereal (which are more like Summons from the games) they are capable of wielding magic and even “Manifest Attacks” which cast

<+Ed_Jowett> That gives a pairing between players, meaning they will often work in pairs. It also makes a single “person” an NPC might interact with significantly more powerful than many others in the world around them.

<+Ed_Jowett> The levelling system has been revised to offer something more akin to the games as well, using a Skill Tree to progress and learn abilities.

<+Ed_Jowett> All in all, I’m very excited to be bringing this one to Kickstarter – it’s a concept I’ve been working on for four years and a firm intention for about two and a half!

END_OF_DOCUMENT_TOKEN_TO_BE_REPLACED

<+JohnHarper> I’m John Harper, a game designer in Seattle, WA. You may know me from such games as Lady Blackbird, Blades in the Dark, and Lasers & Feelings.

<+JohnHarper> Agon (second edition, on kickstarer now) is a fact-paced tabletop rpg about heroes in a world inspired by ancient Greek myths

<+SeanNittner> Hi, I’m Sean (he/him). I came to Agon years ago as a player. John and I had been talking some about Apocalypse World and then about Agon. In 2010 I started running what was at the time, a very high tech game (laughing at that now), that involved a game on heroes (playing Agon) in one room connected to Skype call.

<+SeanNittner> In another room the players playing the gods watched the heroes, and sent down their blessings…and their wrath.

<+SeanNittner> Since then I’ve been working as project manager for Evil Hat and was incredibly excited to work with John on this second edition of Agon!

END_OF_DOCUMENT_TOKEN_TO_BE_REPLACED

<+JC_Thompson> My game is called Gods and Masters. G&M is an urban guerrilla fantasy game for the Savage Worlds system.

<+JC_Thompson> It focuses on partisan conflict in a major city, and most of the missions center around unconventional conflict between three playable factions.

<+JC_Thompson> We are on Kickstarter right now. We have 80 percent funding and 12 days left to go.

END_OF_DOCUMENT_TOKEN_TO_BE_REPLACED

Posted by saintnexan on October 9, 2019
Posted in: Q&A. Leave a comment

<+MikeMyler> I’m Mike Myler, award-winning full-time RPG freelancer of more than half a decade, editor of EN5ider, and most prominently today: maker of campaign settings. I’ve worked on Warhammer 40k RPGs, made NOW (part of WOIN), and you can find me on Twitter @MikeMyler2, on (Link: http://www.mikemyler.com,)www.mikemyler.com, or also my weekly column on EN World (*Mythological Figures*).

<+MikeMyler> Vast Kaviya is a primordial sword and sorcery campaign setting and NPC resource (100+ statblocks) for D&D Fifth Edition, an immense world of low magic and high adventure that’s perfect for adding to homebrew settings or discovering using the book’s exploration rules. Check out the project page for a free 40 page PDF primer! 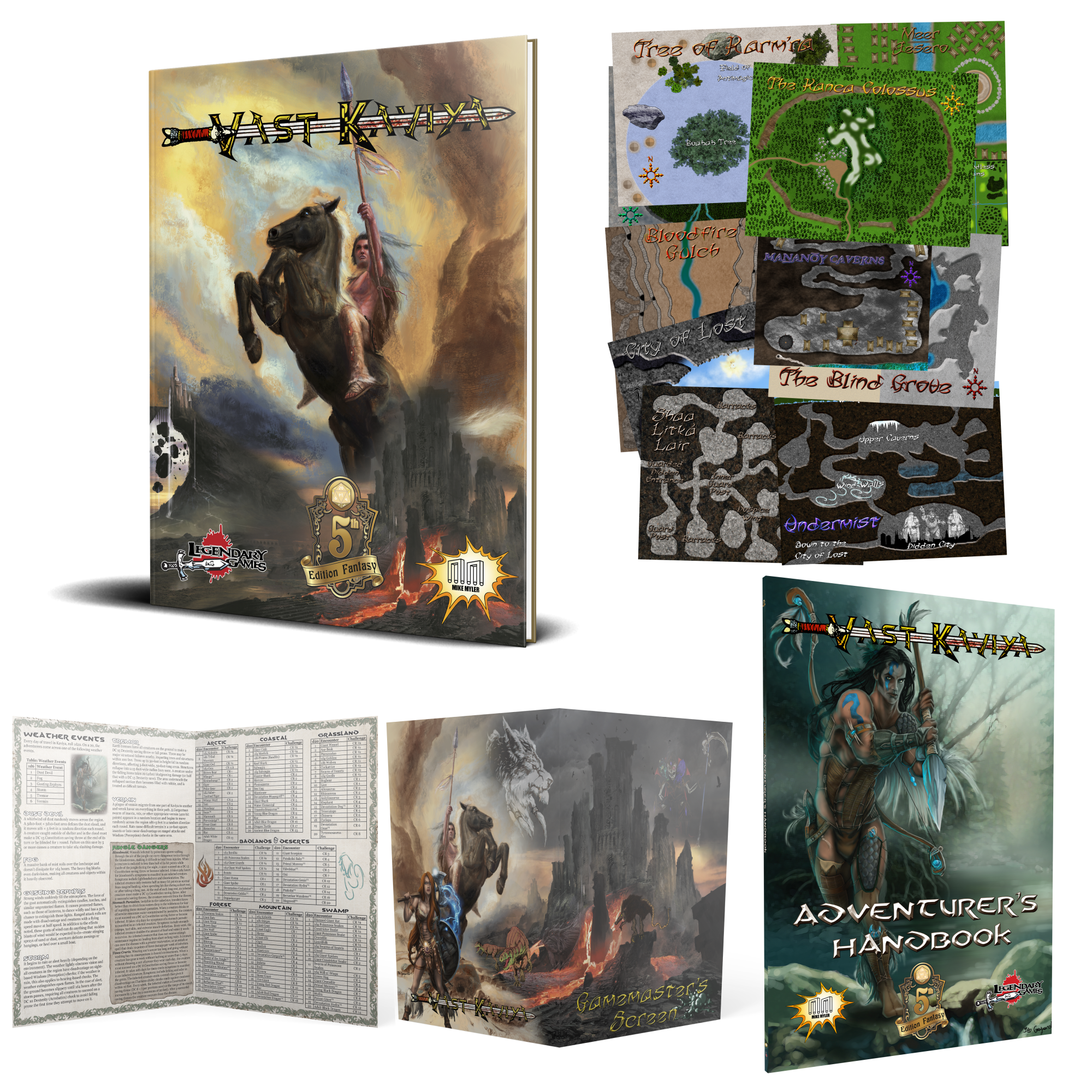 END_OF_DOCUMENT_TOKEN_TO_BE_REPLACED

Posted by saintnexan on October 8, 2019
Posted in: Q&A. Leave a comment

<+KevinB> I am Kevin Bannister, normal working man by day and game maker by night.  I have been developing Gaval Tales, a fantasy western RPG for a little over a year now in my spare time.  Gaval Tales takes place not in an alternate timeline, but an alternate world where magic, elves and all manner of mystical creatures exist.

<+KevinB> However the world is going through it’s industrial revolution and the magic is starting to diminish as new threats and dangers arise. (done)