[19:30] <+CodyPondsmith> Yep! Hey everybody, so I’m Cody Pondsmith, lead designer on the Witcher TRPG! For those of you who don’t know the franchise, the Witcher is a dark fantasy franchise that stemmed from the novels of a prolific polish author named Andrzej Sapkowski. The novels gained a ridiculous following, spawning comics and tv shows and eventually a series of Video games

[19:32] <+CodyPondsmith> a series of video games that most of you are probably familiar with! I was once told that Witcher is like the “Lord of the Rings of Eastern Europe”.

[19:33] <+CodyPondsmith> The world itself is a dark and dangerous world where due to a bunch of bits of magical hapenstance, including a dimensional rift, magic and monsters were dumped onto a bunch of unsuspecting folks who had to struggle to survive!

[19:34] <+CodyPondsmith> The result of this is the Witcher, a class of mutated human who is purpose built to slay monster and break curses! The only problem is, most people are deathly afraid of them due to their mutations and their grim work!

[19:35] <+CodyPondsmith> It’s a really deep lore and it would take hours for me to summarize it in depth but that should be a good intro for anyone who isn’t familiar! (Done)

END_OF_DOCUMENT_TOKEN_TO_BE_REPLACED

Posted by saintnexan on July 24, 2018
Posted in: Uncategorized. Leave a comment

Curious about the upcoming The Witcher TRPG? Cody Pondsmith, lead designer and writer for the game, will be sitting down with host Dan Davenport for a text-based Q&A session on the #randomworlds IRC channel. Cody will be taking questions from both Dan and the audience, so if there’s something specific you wanted to know about the game, please come and ask! If you can’t make it, a log of the Q&A will be posted afterwards on the Hardboiled GMshoe’s Office.

We’re looking forward to a chance to reveal a bit more about The Witcher TRPG at the Q&A but, for now, how about a preview of the cover?

END_OF_DOCUMENT_TOKEN_TO_BE_REPLACED

[13:33] <+GregSaunders> So a bit about me. I’m a long term RPGer who cut my teeth on AD&D, WHFRP, and just about anything else we could find back in the eighties. I’ve been writing games for about ten years, and have released two in recent times, Exilium and Summerland – both through KS. I now have a new game called Esoeterica up on KS.

[13:35] <+GregSaunders> Whoops, I meant Esoterica. It’s a game of occult mystery and the quest for power set in the modern world. I’ve sometimes referred to it as ‘Aleister Crowley the RPG, without the nasty bits.’. It uses the D6 system like my other games, and has a similar ‘drive-chain of play’ as all my games. (done).

END_OF_DOCUMENT_TOKEN_TO_BE_REPLACED

[19:36] <+GregPorter> Hey, Greg Porter here. I run a one-man outfit called BTRC games. I also do freelance work, but I’m here tonight with a project that is not quite either.

[19:38] <+GregPorter> Game designer Lee Garvin has done stuff like Tales From the Floating Vagabond and Badass Zombie Killers, but like most indies, he has no real safety net.

[19:38] <+GregPorter> A run of serious bad luck has put him on the street, and I’m Kickstarting a game that makes fun of his miserable life, with a chunk of the proceeds earmarked to helping him get back on his feet.

END_OF_DOCUMENT_TOKEN_TO_BE_REPLACED

[19:32] <+JonathanOTETweet> I’ve designed tons of games, and Over the Edge is my favorite

[19:33] <+CamBanks> Opening act Cam Banks is RPG director at Atlas Games and is developer of Over the Edge, which means he pretty much gives Jonathan the thumbs up and occasionally has to organize emails, Slack channels, and… see, there he goes.

[19:33] <+JonathanOTETweet> Cam has been instrumental in rallying all the creatives to a single vision, and the game’s turning out great 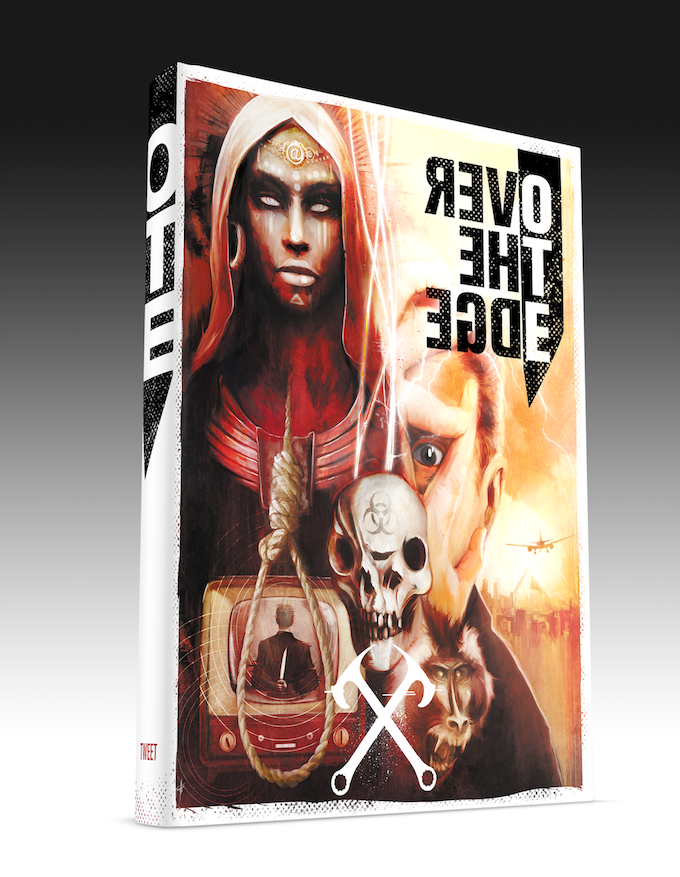 END_OF_DOCUMENT_TOKEN_TO_BE_REPLACED

[19:33] <+JuanHerrera> Hey, I’m Juan Herrera I’m the creator of Battle Century G (BCG for short), just an indie game designer from South America. I’ve been doing this professionally for about 6 years and for 24 as an amateur, drawing fantasy maps with my own rules to play as board games. BCG is a tabletop RPG in the style of Mecha anime and videogames. END_OF_DOCUMENT_TOKEN_TO_BE_REPLACED

[19:33] <+EricfromBloatGames> Hi I’m Eric Bloat founder of Bloat Games and creator of the SURVIVE THIS!! game line which includes SURVIVE THIS!! Zombies! 2nd Edition, SURVIVE THIS!! Dark Places & Demogorgons & SURVIVE THIS!! Vigilante City (the game that I’m here to talk about today).  I also wrote The Vigilante Hack, The Zombie Hack & White Box Zombies among other titles…

[19:36] <+EricfromBloatGames> SURVIVE THIS!! Vigilante City is a love letter to the awesome superhero cartoons of the 1990s like Batman:  The Animated Series, X-men, Spider-man and TMNT.  The system it uses is White Box based OSR with sprinkle of D&D 5e thrown in for good measure.  It’s a more gritty, street leveled game than your standard Supers RPG and focuses around a city that’s…

[19:37] <+EricfromBloatGames> Under siege by criminals and comic style villains and you play as the Vigilantes that rise up to reclaim your city! ….

[19:38] <+EricfromBloatGames> Currently on Kickstarter, the KS campaign is already funded with lots of stretch goals unlocked and more to come over the next 10 days before it ends.  The KS is for 2 books: The Core Rules and The Villain 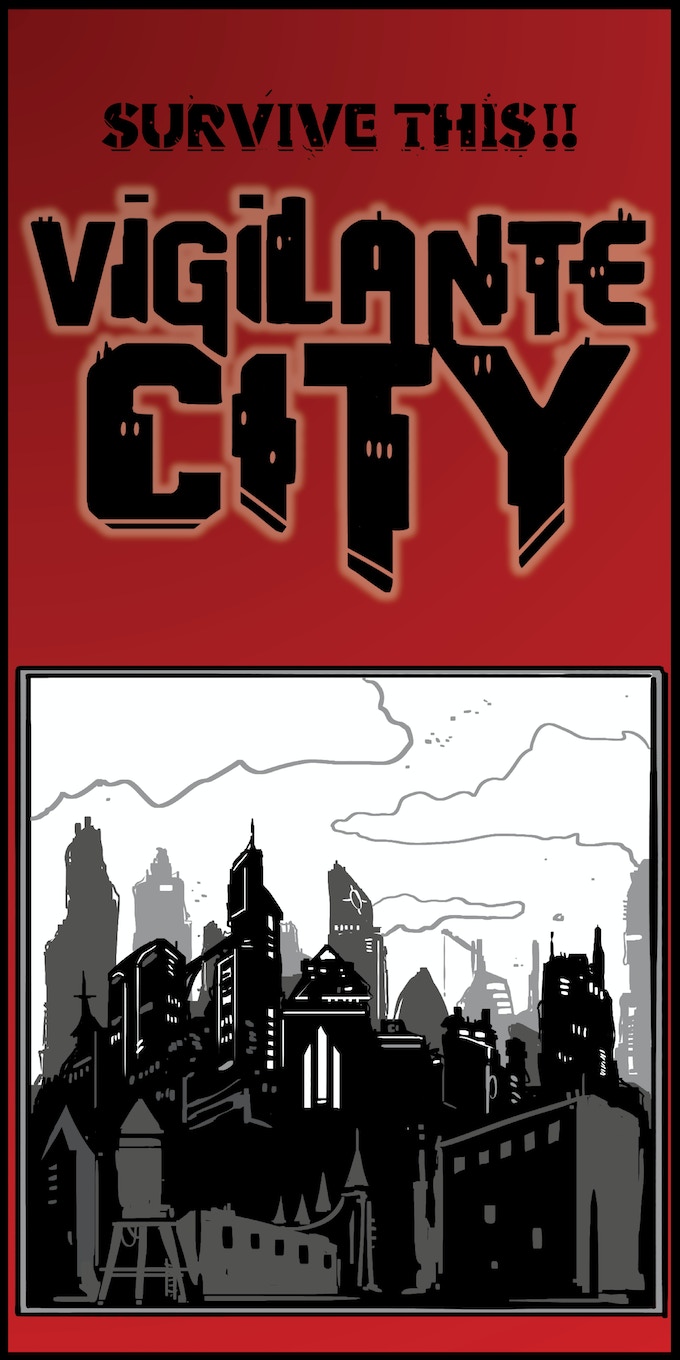 END_OF_DOCUMENT_TOKEN_TO_BE_REPLACED

[19:33] <+AllenSaulnier> Well hello everyone.  As you can read, I’m Allen Saulnier.  I was invited a couple of weeks back when I posted on Kickstarter that I am creating my latest custom universe for RPG.

[19:33] <+AllenSaulnier> I am a filmmaker by trade, but I have been playing Dungeons and Dragons for 35 years now.

[19:34] <+AllenSaulnier> When I set out to create this new universe one of my players saw my first draft of the world map and suggested that others might want to play in it as well.  So I decided to give Kickstarter a shot

[19:35] <+AllenSaulnier> So I am 30 days into the campaign and I am creating the first continent for players and gms alike to utilize with their rpgs

[19:36] <+AllenSaulnier> I am designing it to be used with whatever version of D&D and other rpgs as well.  I am creating a fully mapped realm. Land, Cities, Dungeons you name it.  I will be including details about the continent, world, and all the places along with the quests and campaigns.

[19:37] <+AllenSaulnier> However if you are a gm in need of a world and want to scrap all the quests and create your own, of course that is up to you.  Really I wanted to give busy gms a resource to use however they wanted.

[19:37] <+AllenSaulnier> That’s pretty much it.  If anyone wanted to ask questions or wants to know about specifics, fire away! 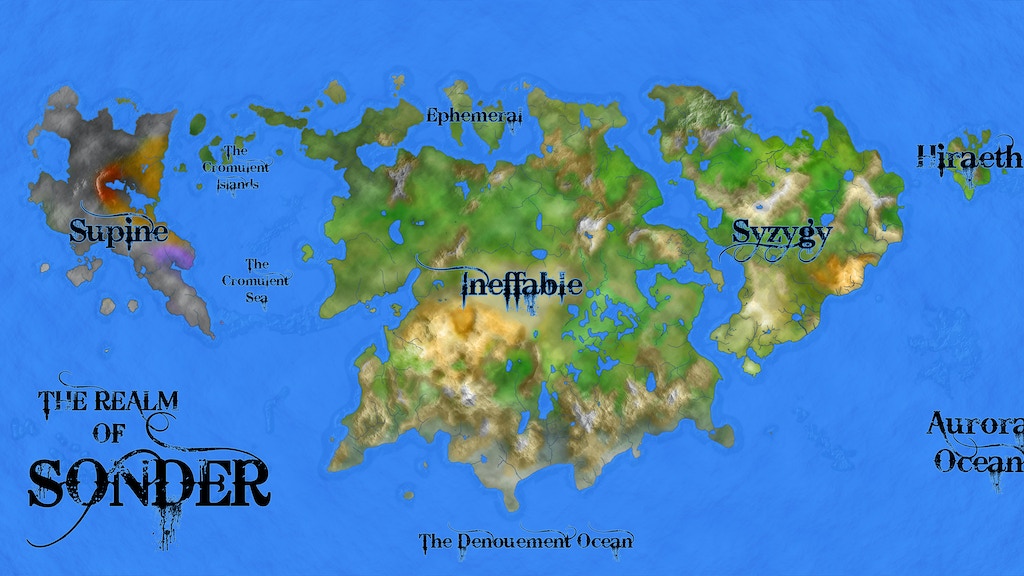