[19:00] <+TonyGrandinetti> Hello Everyone.  My name is Tony Grandinetti and I am here to talk about my game:  Emergence.

END_OF_DOCUMENT_TOKEN_TO_BE_REPLACED

[20:01] <+David_LoreRPG> Yes, thanks for the invite Dan. My name is David and I’m the CEO of GameFace Publishing, maker of the soon to be released new RPG…Lore

END_OF_DOCUMENT_TOKEN_TO_BE_REPLACED

[19:01] <+Clovis> Hello everyone! I will be speaking here as the representative of the team behind Shadows of Esteren, a medieval-fantasy RPG with a horrific, gothic mood. The game is very influenced by gaming universes such as Ravenloft (of which several of the founding members of the project are huge fans) or World of Darkness, but also by books such as Lovecraft’s or Poe’s,

END_OF_DOCUMENT_TOKEN_TO_BE_REPLACED

[19:05] <+Matt> However after playing many years with whitewolf and other story telling games D&D was missing the storytelling elements.  This is when I started to modify D&D into what became legend

[19:08] <+Paul> The world of Thera has been developing since 1982 as a world I ran under both the Chivalry and Sorcery rules and RuneQuest rules…

[19:09] <+Matt> nd has placed the role of the character on how the player customized their skills and feats.  In Legend you could play a spoiled son of a baroness with no set direction in life and still be an effective character within the game. However if you long for the more traditional approach to D&D you would just need to choose the skills and feats that make the class 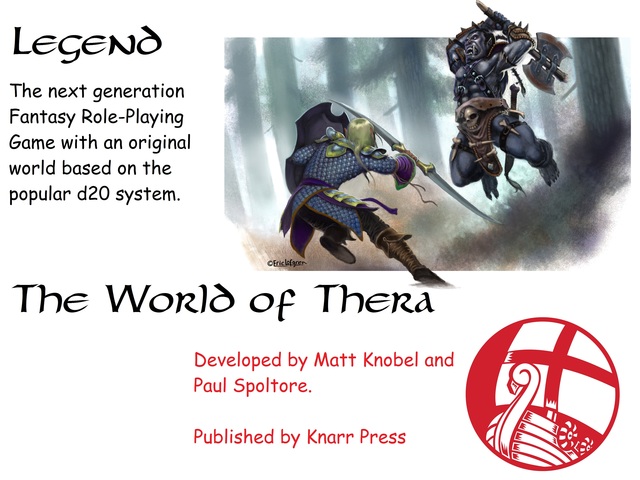 END_OF_DOCUMENT_TOKEN_TO_BE_REPLACED

[14:01] <+SimonW> So, I’m Simon Washbourne of Beyond Belief Games, better known for Barbarians of Lemuria. I wrote Crimson Blades (A Dark Fantasy RPG) to be a homage to Elric/Corum

END_OF_DOCUMENT_TOKEN_TO_BE_REPLACED

[19:01] <+AJofUniversalHorizons> HI, I’m AJ Schmidt. I have been RPGing since 1978. Ten years ago, I had the pleasure of introducing my son to the world of role-playing with organize-play living worlds.

[19:01] <+AJofUniversalHorizons> We hosted conventions, wrote adventures, and ran events supporting that system… until it all changed. The company came out with a Fourth Edition and forbade us to continue the campaign we all loved.

[19:01] <+AJofUniversalHorizons> Moreover, the new edition resembled miniature gaming more than role-playing. We enjoyed the game for a while, but it left us longing to share the same types of experiences we had growing up.

[19:01] <+AJofUniversalHorizons> Myself and life-long gamer John Teske always tweaked ‘house rules.’ Our friends encouraged us to do more. We wrote a multi-genre skill-based tabletop RPG.   After six years of development and three years of play testing, we published UNIVERSAL HORIZONS PLAYERS’ HANDBOOK months ago.

END_OF_DOCUMENT_TOKEN_TO_BE_REPLACED

[20:00] <+Eloy-3EG> In this game, you take the role of bugs living in the filthiest house imaginable and you’re not sentient

[20:00] <+Eloy-3EG> the bugs of different types have become more like tribes, who fight for ownership of the different rooms of This House.

END_OF_DOCUMENT_TOKEN_TO_BE_REPLACED

[19:19] <+LesterSmith> Hi, everybody. I’m Lester Smith. Used to work full-time for Game Designers’ Workshop, and later for TSR, and did a bunch of freelance work for others.

[19:21] <+LesterSmith> For the past many years, I’ve been working full-time in educational publishing, but I run a little hobby publisher on the side, called Popcorn Press.

[19:23] <+LesterSmith> And last year I started publishing some games again, card games funded by Kickstarter projects to pay for the art.

[19:25] <+LesterSmith> Last July, I decided to return to role-playing design and at Quincon ran a “players are ghosts” scenario using what is now becoming the CORE RPG. (That’s how I usually refer to it, though the d6xd6 designation can be seen on the cover.)

END_OF_DOCUMENT_TOKEN_TO_BE_REPLACED

[19:01] <+JohnRuthven> Hey everyone! Im John, systems designer for Hero’s Journey.  Thanks to everyone for coming.  This is exciting 🙂

[19:02] <+JohnRuthven> Im not good at being patient…ive been threatening anne with hitting enter on that post for 5 minutes 🙂  Thank you Dan for having us

[19:02] <+AnneRuthven> We’re here to talk about Hero’s Journey, a new game about playing mythological heroes in an alternate modern setting, and to answer all your questions about it.

END_OF_DOCUMENT_TOKEN_TO_BE_REPLACED

[19:04] <+RogerHuntman> Hello all I am Roger Huntman writer of the novel Vampire Hotel but I am her to introduce you to my game Ancient steel Horror