<+Phil_AdventureSystem> The Adventure System uses simple polyhedral dice mechanics to resolve conflict so you can drive the story and action. You roll a die and take the result at face value without adding or subtracting any modifiers from that value.

<+Phil_AdventureSystem> The core rules allow you to breathe life into any campaign you can imagine for a roleplaying game and are suitable for any genre including alternate history, cyberpunk, fantasy, and science fiction. The core rules include everything you need.

<+Phil_AdventureSystem> If you want something to look at, the Full-size Preview has all of Chapter 1 available. END_OF_DOCUMENT_TOKEN_TO_BE_REPLACED

<+JasonCarruth> Hi, I’m Jason Carruth. I’m the director of Ferocious Games, a game developer and general creative. I’ve been playing role-playing games for about 30 years and designing games for well over 25 years.  I am on the verge of releasing my sci-fi/cyberpunk role-playing game, Dystopia 23-The Razors Edge. Dystopia 23 is set two hundred years in the future after a glo

<+JasonCarruth> Okay, I’ll have to do this bit by bit

<+danhunsaker> Yeah, there’s a limit of about 300 characters per line.

<+JasonCarruth> I am on the verge of releasing my sci-fi/cyberpunk role-playing game, Dystopia 23-The Razors Edge. Dystopia 23 is set two hundred years in the future after a global economic collapse which happened early in the 21st-century. It shaped the world into a place of worldwide poverty, government corruption and overwhelming privatisation with megacorporations contro

<+JasonCarruth> with megacorporations controlling way more than they should.

<+JasonCarruth> The characters are a group of freelance operatives with specialist skill sets who undertake jobs which are frequently of questionable legality.

<+JasonCarruth> This dark dystopian future reeks of classic cyberpunk, but it can also be taken in a variety of other directions.

<+JasonCarruth> The game can be played as a purely futuristic military campaign with characters taking the role of mercenaries who work for megacorporations, governments or private resistance movements.

END_OF_DOCUMENT_TOKEN_TO_BE_REPLACED

[Q&A] Carnal: The Shades of Dominion

<+TheCarnalC> Hi, I am TheCarnalC, and my game is The Shades of Dominion.  It is a new Table Top RPG where players can create characters based on their favorite Magic: The Gathering decks, or better, create an entirely new character.

<+TheCarnalC> There is a system in the game to help convert cards and their effects into what is called Spell Templates, as well as plenty of opportunity to create your own Spells from the Spell Templates that already come with the game.

<+TheCarnalC> In any case, the real difference between The Shades of Dominion and Magic: The Gathering is that this game is set up in a dystopian setting where magic/mana is replaced by The Shade, which acts as your power-source and lifeblood of the worlds the players draw it from.  So every time The Shade is syphoned, the world the players are adventuring in

<+TheCarnalC> dies a bit more.  So it has that interesting dynamic as well *done*

END_OF_DOCUMENT_TOKEN_TO_BE_REPLACED

Posted by saintnexan on January 27, 2020
Posted in: Uncategorized. Leave a comment

12:30:47 <+danhunsaker> When you’re ready, go ahead and introduce yourself and your project!

12:32:46 <+JasonDurall> Hi everyone! I’m Jason Durall, line editor for RuneQuest and most things BRP-related at Chaosium that aren’t Cthulhu.

12:33:21 <+JasonDurall> I’ve been there for about three years now, juggling the role with my duties on Conan and Dark Conspiracy.

12:33:56 <+JasonDurall> We’ve just recently released “The Smoking Ruin & Other Stories” for RQ, a collection of adventures and sourcebook material.

12:34:07 <+danhunsaker> Thanks, JasonDurall! The floor is now open to questions!

12:35:26 <&Cegorach> Does the book still concern itself with the region around Dragon Pass?

12:36:04 <+JasonDurall> Yes. It’s set in the area called the South Wilds, primarily, though one of the adventures begins in Clearwine. 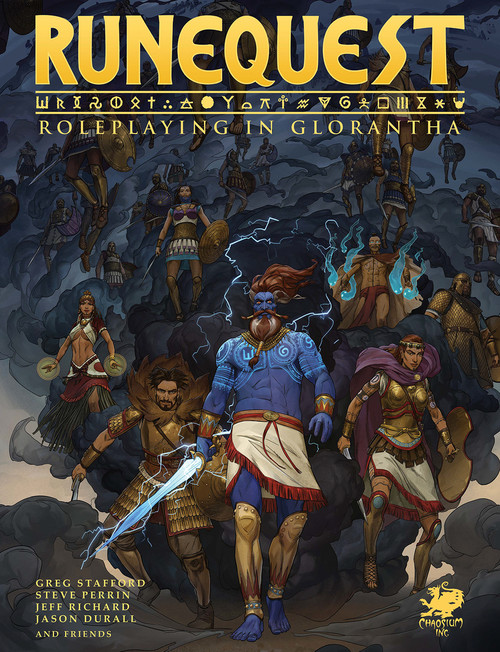 END_OF_DOCUMENT_TOKEN_TO_BE_REPLACED

<+UnboundPAUL> Hello everyone!  My name is Paul from Mayhem United.  Right around the corner I will be self-publishing UNBOUND D6 Role-Playing. This is the best version of a D6 role playing game there is (and there are a few). You can play any genre you can imagine from police dramas, to grim-dark fantasy, to over-the-top sci-fi (and yes, you can play super

<+UnboundPAUL> heroes too). You will be using six-sided dice (D6) dice gathered in “dice pools” to figure out how things go in the game.  This is a tried and true, classic system that has been updated to today’s standards. There is no limit to what you can do with this system and some imagination (and a good GM). END_OF_DOCUMENT_TOKEN_TO_BE_REPLACED

<+ChrisMansfield> Hello my name is Christopher Mansfield I am the Co-founder and a content creator for Arrow to the Knee.  I am here today to talk about our new game HOME.  It is a science fantasy game set on an alien world.

END_OF_DOCUMENT_TOKEN_TO_BE_REPLACED

<+WetInkMatt> Hello Hello! We are the co-owners of Wet Ink Games.

<+WetInkBrandon> I’m Brandon K. Aten, one half of Wet Ink.

<+WetInkMatt> We are here to talk about our current project, now on the ol’ KickStarter.

<+WetInkBrandon> We’ve been around here more than a couple times talking about the various indie RPGs we make, but this project is a little special

<+WetInkMatt> We are following up Never Going Home, released last year with more for the game.

<+WetInkBrandon> back at the end on 2018, we launched a campaign for a game of eldritch horror in the trenches of World War One based off of an art book by our friend Charles Ferguson-Avery. That’s the game Never Going Home Matt just mentioned.

<+WetInkBrandon> Unlike our other Kickstarter projects we’ve launched, which all started as a campaign for one, single book, this one is for THREE books full of more material for both the players and the narrators.

<+WetInkBrandon> Our other projects may have grown to include more adventures or books, but this is three books from the start

<+WetInkMatt> We are calling them our Campaign Dossiers.

<+WetInkMatt> Each will focus on a specific theatre of the war.

END_OF_DOCUMENT_TOKEN_TO_BE_REPLACED

<+BPIJonathan> Hello all and welcome to the chat. Tonight I am going to talk about a game based upon one of my favorite independent comic books, Mighty Tiny by Ben Dunn. We are currently running a kickstarter, that is going pretty slow, but I am not worried. We have been away lately because I have been dealing with a fire that destroyed my home office and library and my

<+BPIJonathan> family has been dealing with that. We are Battlefield Press and we make great games.

END_OF_DOCUMENT_TOKEN_TO_BE_REPLACED

[Review] The Islands of Purple-Haunted Putrescence

Posted by saintnexan on January 18, 2020
Posted in: Review. 3 Comments

So the other day this swell dame strolls into my office. Great set of gams, and a nice, skimpy outfit.

And four arms. Carrying a chainsaw, a blaster, a glowing black sword, and a book.

And covered with purple slop.

“Greetings from the Stygian darkness of the eldritch void beyond voids, meatsack. Got a review copy for ya.”

“The Islands of Purple-Haunted Putrescence,” she says. “An old-school D&D-based hex crawl.”

“That explains the purple slop, I guess,” I says. “But D&D? Uh… Scotty the Dwarf usually drops off that sorta thing. What’s with the dark future get-up?”

“Islands has everything,” she says, wavin’ her arms and slinging purple slop everywhere. “Mutants. Dinosaurs. Aliens. Trans-dimensional freaks of every sort.”

“Gotcha,” I says. “I’ll give it the treatment. Meantime, you want a towel?”

“You got a little something on your… well, everything.” END_OF_DOCUMENT_TOKEN_TO_BE_REPLACED

<+JamesMSpahn> My name is James M. Spahn, and I run Barrel Rider Games. We’re currently partnered with Gallant Knight Games and are Kickstarting The Hero’s Journey, Second Edition. Barrel Rider Games has been kicking around for about seven years, and I’ve done a fair bit of mainstream freelancing in the RPG industry as well during that time.

<+JamesMSpahn> Barrel Rider Games is most well-known for its OSR style products, including White Star, the White Box Omnibus, and the first edition of The Hero’s Journey.

<+JamesMSpahn> My freelance credits include work on The One Ring, Adventures in Middle-earth, Star Wars, Legend of the Five Rings, Zorro, and Rocket Age, along with several adventures for Frog God Games. (done)