Posted by saintnexan on May 26, 2020
Posted in: Review. Leave a comment

So the other day it was pretty nice out, so I had the window in my office open. I shoulda known I’d end up lettin’ bugs in that way, but I didn’t expect a 24″ winged bug-man thingy in a black business suit and shades carryin’ an RPG rulebook. (That was pretty impressive, since it was a full-size rulebook that coulda smashed the bug good and flat.)

The little critter flies over to my desk, drops off the book, then flits over to the chair.

“Hello!” he says. “I’ve been sent on a dangerous mission to deliver you this review copy of Agents of Concordia!”

“Uh-huh,” I says. “Is this a game about playin’ sharp-dressed bugs?”

“I am a Phyllia, not a ‘bug’,” the uppity bug says. “And no, the game is not just about playing my species. It is about playing secret agents of many different species, including your own, defending a magical multiverse from terrible danger in an alternate 1960s.”

“Fantasy spies, eh?” I says. “I can get behind that. Okay, yer on. Now you’d better hurry up and fly back out the window before anyone sees you.” 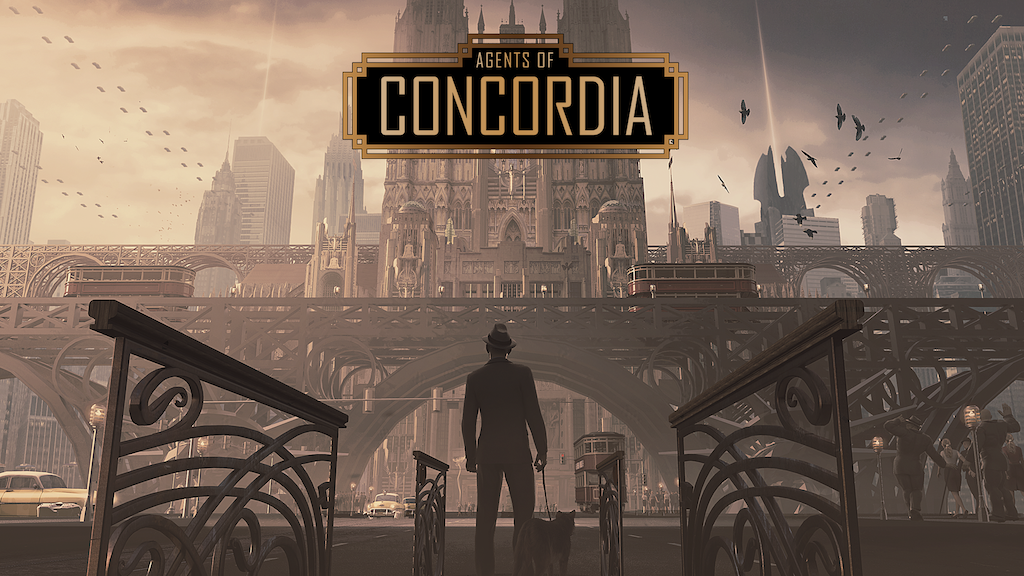 It’s 1964 on Earth, and on the surface, everything is perfectly normal.

It turns out, however, that the dimension we know is just one of many, and many of these worlds are members of a commonwealth known as Concordia. For its part, Earth sits at one end of the multiverse, one step away from the Singularity, the source of Aether, the stuff of magic. At the other end of the multiverse sits Artifex, the gateway to the Primal Dimensions, home to horrible monsters of all descriptions known as Vagrants — creatures that would like nothing more than to ravage their way to Earth and the Singularity.

The players are agents of Concordia Central Intelligence (CCI), a sort of magical Men in Black organization who deal with threats to the multiverse.

The book describes 15 different worlds in loving detail. The only real problem I have with the descriptions is that they don’t really convey the tech levels of these worlds aside from that of Helix, home to advanced computers, holograms, and automatons.

Magic generally takes the form of rituals and enchanted items. The book offers a number of the latter — including the Necronomicon! — that agents can check out from the agency’s armory, but I was disappointed to find rituals completely absent except for the Rituals skill itself. That strikes me as a fairly major omission, given how magic-rich the book tells us that the worlds of Concordia are.

The book features a respectable collection of 22 creatures, from the lowly Average Joe to the apocalyptic Herald of Devastation. In addition, two entries are actually templates — one for large beasts, one for small beasts. Many of the creatures display the author’s great creativity, such as the Noise, a living audible signal that spreads like a literal earworm. Unfortunately, some of the entries lack sufficient description — the Whaleruss, which lacks any physical description aside from its great size, is a prime example.

Characters have six attributes (“Basic Abilities” in AoC parlance) rated from -6 to +6: Constitution, Dexterity, Focus, Wisdom, Wits, and Charisma. The 30 skills, rated from 1-3, are quite broad, as befits a cinematic game — Melee Weapons, for example, covers all hand-to-hand weapons.

Characters also have Perks — aspects of the characters that provide Support (see below) in certain circumstances (e.g., when you’re an Animal Lover interacting with animals) as well as some special abilities (e.g., Amphibian lets the character breathe underwater).

Interestingly, character creation in this game doesn’t involve point-based selections. Instead, base scores in attributes come from the character’s species, as do some initial Perks. Then, the selection of the character’s background, basic training, and career with the CCI provide modifiers to attributes and skills as well as additional Perks. With 15 backgrounds, 20 species, and 10 careers, there’s plenty of room for players to create the characters they want without the need to juggle points.

The species themselves are just as exotic as the worlds in which they live and are described just as well. I can’t really do the species descriptions justice, except to say that all of them are unique to this setting (with the possible exception of Automatons and, of course, Humans).

Players roll a number of d12s equal to their characters’ skill, take the highest, and add the attribute score, attempting to beat a target number. Easy enough.

The skills aren’t hard-linked to a specific attribute, allowing for some creativity on the part of the players when it comes to resolving problems. The text helpfully offers a number of attribute/skill combinations that might prove useful in a variety of situations.

Difficulty level is reflected in Supports and Cripples, which add a flat +3 or -3 to the attempt, respectively. The text warns GMs to beware of going overboard on Supports and Cripples, since a single Support or Cripple can make or break a roll. Accordingly, these modifiers are only applied when the circumstances significantly affect the attempt. I like the simplicity here, but I think it may be a little on the coarse side. For example, climbing equipment might add a +3 to a climbing effort, but +6 would probably be too much to reflect particularly good climbing equipment.

For each factor of the target number the roll beats, the attempt earns a Success Level. Success Levels, in turn, may be spent on four different effects:

I always like for success levels to matter, so this is a major plus for me.

On the other hand, I find the Grit attribute, derived from Constitution, to be problematic. Grit affects the character’s wound threshold and hand-to-hand combat damage. The problem is that it ranges from -1 to +1. That’s it. In my opinion, that’s not enough to reflect the might of really big, strong characters. (Or really tiny, weak characters, for that matter.)

Combat uses the same basic rules as does normal task resolution. The GM doesn’t normally roll, as the NPC stats are expressed as target numbers. All PCs have a health score (hit points) of 6. Once those are gone, the players have to roll Constitution and the Endurance skill to stay conscious. In addition, PCs have a wound threshold of Grit + 3. If an attack exceeds that threshold in damage, the character receives a Wound Level for each time the damage exceeds the threshold. The player and GM get to decide the specific nature of the wounds. Apparently, the only way for a PC to die is to receive a Wound Level while unconscious, which, I suppose, goes along with the cinematic nature of the game.

The only problem is that what they’re used for isn’t at all clear. The rules state that they may be spent to interrupt an action in combat and to make a Dexterity + Dodge roll an automatic 6, but the text also says that they may be spent to succeed at rolls that would otherwise fail. Does that mean a Veterancy point expenditure results in an automatic success? Do they instead grant a bonus to the roll? If so, how large? I’m really not sure.

As previously mentioned, the GM doesn’t normally roll for NPCs because their stats are presented as target numbers. To be specific, NPCs have pre-rolled scores for combat and non-combat actions. I see the value of streamlining in this manner, and certainly, it makes improvising NPC stats a breeze, but I think there may be a bit too much streamlining here. There’s not an obvious way to know how strong, agile, or smart a creature is supposed to be — it’s all lumped into those two stats.

The book includes a simple introductory adventure involving the agents making sure a seemingly idyllic island village is safe and stress-free for a very important person going into hiding there under the CCI’s protection. The text describes the villagers in great detail, and it turns out the situation on the island isn’t all that idyllic after all. The adventure includes a timeline of what will happen while the agents are there but otherwise leaves them to their own devices.

Players who aren’t proactive may find this adventure frustrating, or even boring. The adventure assumes that the agents will do a great deal of interacting with the villagers, intervening when they discover trouble. And even the most proactive players may still feel let down by the relative lack of action — with a few exceptions, violence will only occur if the agents screw something up.

Personally, I’d prefer a more high-octane introductory adventure, but players who thrive on roleplaying should be happy.

The full-color art is top-notch throughout the book, ranging from good to outstanding. The otherworldly cityscape on the cover is simply stunning.

The writing is both accessible and evocative, and the layout is attractive and fairly easy on the eyes. I didn’t notice any major typos. The book includes a thorough index.

The premise of Agents of Concordia is remarkably creative and loaded with potential. The core mechanic is simple and transparent. However, I think the core book strongly needs a supplement to fill in some of the setting gaps, particularly in the areas of technology and magic. Don’t get me wrong: It’s fully playable as-is with a bit of creativity on the part of the GM, but I can’t help but feeling that such creativity will paint GMs into a corner when they try to fill in the gaps themselves and later discover that the setting has been developed in a different direction.

So, should you get this game? If the premise I’ve described appeals to you, absolutely. It may take a wee bit of creative elbow grease, but the end result — the adventures of magical dimension-hopping secret agents — looks to be a whole lot of fun.