[19:00] <+Tsofian> My name is Terry Sofian. I’m the originator of the Hive, Queen and Country Game Universe

[19:01] <+Tsofian> Our games include The Hive and the Flame, a miniatures game 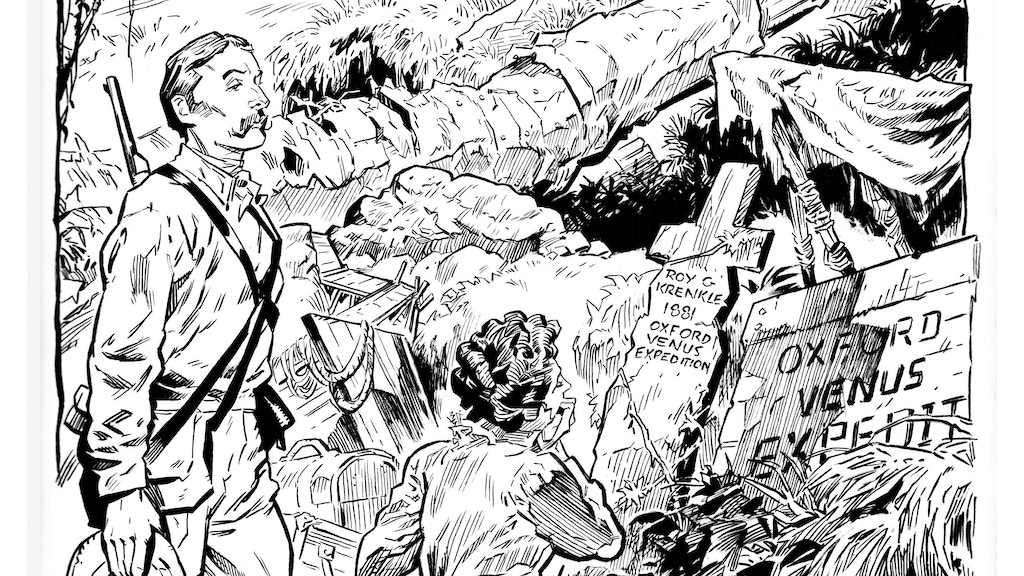 [19:01] <+Tsofian> Terry Sofian describes himself as a generalist in a world of specialists. After starting out as a naval architecture student at Michigan he (finally) earned degrees in anthropology (BA) and biology (MS) both from the University of Missouri at St Louis. He has worked as a genetic engineer, a radiopharmachemist, in disaster preparedness and homeland security ma

[19:02] <+Tsofian> The rest just yaps about being in the National Guard and suchlike

[19:03] <+Tsofian> and says nice things about my wife and daughter-which is important

[19:08] <+Tsofian> and ended up with enough material to have a distinct and distinctive game universe

[19:08] <+Tsofian> I shopped it around and ended up getting the RPG Stars of Empire published by Black Pigeon Press

[19:10] <+Tsofian> We have a currently live Kickstarter to fund three additional books!

[19:16] <+Tsofian> One of the main events is an invasion of England by alien arthropods

[19:17] <+Tsofian> The Victorian was an era when a lot of things happened, so adding a few extra planets, air and space travel and a pair of alien races is just going to stir the pot!

[19:19] <+Zond> Victorian sci fi is a broad label. Is the setting inspired by Wells and Verne or is it more of a hard look at an extrapolated Victorian society complete with colonialism and class inequality?

[19:19] <+Tsofian> We certainly are inspired by period writers

[19:19] <+Tsofian> We are alos inspired by actual persons and events

[19:19] <+Tsofian> Classism, sexism, racism and all the other ills of the period are included

[19:20] <+Tsofian> we do try and concentrate on the possitive aspects of the period without ignoring the negatives

[19:22] <+Tsofian> The prime “conceit” of the setting is Aerolyth. This is a mineral that allows air and space flight

[19:22] <+Tsofian> There is also multi oxygen discovered by the Russian scientist Mendelev

[19:24] <+Tsofian> Also George Cayley is much more active in aviation and hang gliding is widespread by 1850

[19:24] <+Zond> As the setting spans roughly 150 years could you possibly summarise the various eras of play, what perhaps a typical player group might be doing and the themes they would be exploring?

[19:24] <+Tsofian> Goldsworth Gurnsey perfect his steam omnibus and is able to commercialize it

[19:25] <+Tsofian> This period includes two wars with the alien Hive

[19:26] <+Tsofian> Diplomatic efforts with the aliens and their human servants on Mars

[19:26] <+Tsofian> There are several wars on Earth between the various nations

[19:26] <+Tsofian> Characters can do just about anything a period personage could do

[19:27] <+Tsofian> The basic idea was to have a “sandbox” that players and referees, artists and writers and any other creative types could explore and expand upon

[19:27] <+Tsofian> We have written adventures set after a spacecraft crash on Venus

[19:32] <+Tsofian> so while you are waiting let me say the character sheet is something we really want to improve

[19:32] <~Dan> No problem. We just find that looking at a character sheet of some sort helps guide discussion of the system.

[19:35] <+SirGene> Dan I actually find this one of the most interesting games you have had featured here.  It looks well thought out and I like the period and the “Science”, but I am going to have to run and be daddy.

[19:39] <~Dan> So I see attributes and skills of some description… Can you describe the core mechanic?

[19:40] <+Tsofian> The more you win by the better the results for you and the worse for them

[19:41] <+Tsofian> Skill + a number generated by averaging two linked attributes and dividing them to get Native Abilities

[19:42] <+Tsofian> There are three pairs of attributes Physical is Strength and Agility

[19:43] <+Tsofian> Social abilities are much more important in this era and genre than in many others

[19:44] <+Tsofian> A sword swinging barbarian doesn’t need to know how to seat people at a cotillion

[19:48] <+Tsofian> The opponent tries to block or evade using their skills and what not and a D20

[19:49] <+Tsofian> If you roll over their defense you add the number over to your damage roll!

[19:50] <+Tsofian> The damage itself for a muscled powered weapon is based on the character’s strength

[19:50] <+Tsofian> mechanical or chemically powered weapons, guns, crossbows, explosives and such is based on the weapon not the character

[19:51] <+Tsofian> although there are minimum strengths to use things like heavy rifles or shotguns

[19:51] <+Tsofian> Fortes are things the charcater is particularly good at

[19:52] <+Tsofian> we made add Foibles, which will be disadvantages the character has

[19:52] <+Tsofian> Social standing and such are critical to a character

[19:53] <+Tsofian> One I like is social invisibility. It is only available to characters of lower social classes but if a roll is successful higher status characters will simply miss the low status person in their midst. Obviously if they are being attacked this won’t hold up

[19:54] <+Tsofian> But it allows a lower status character to overhear their betters

[19:54] <+Tsofian> Since this is a sexist time there are a number of fortes that only female characters can have

[19:57] <+BPIJonathan> Im sorry about asking something that I am sure has already been asked, but is this a SciFi type game?

[19:59] <+Tsofian> I would say we have things in common and some great diferences as well

[20:00] <+BPIJonathan> I just got here, so I apologize for rehashing material. Been kind of sick most of the day.

[20:00] <+Tsofian> We changed the timeline earlier and allowed the changes to multiply

[20:01] <+Tsofian> In 1889 there were flying battleships by 1880 but these didn’t have much effect on British politics. In Our Time Line (OTL) even the invention of the Wright Flyer caused serious consternation in the Island Kingdom

[20:01] <+Tsofian> When one thing changes other things change downstream

[20:02] <+BPIJonathan> You have already told me enough to make me interested.

[20:02] <+Tsofian> We have looked at a lot of events and how they would change or remain the same

[20:03] <+Tsofian> Then we have an alien doctor save the Russian Prince George

[20:03] <+Tsofian> so George becomes Tsar instead of Nicholas III

[20:05] <+Tsofian> instead Bismark is forced into an economic alliance with the Dutch

[20:05] <+Tsofian> Also we wanted off worlders to be able to hold their own against the Jingoistic Earthers

[20:06] <+Tsofian> So the cultures on Venus (which isn’t a jungle hothouse) can stand up to the Earthers

[20:06] <+Tsofian> At least one species, called the la selpurdi are on Venus terraforming it for their own masters using human slaves harvested 25,000 years ago from Earth

[20:07] <+Tsofian> There is a rumor that the ancient enemies of the la selpurdi, the Oonaliss are also lurking about the solar system

[20:07] <+Tsofian> The la selpurdi and their human servants control Mars

[20:08] <+Tsofian> Venus is inhabited by survivors of humanity that were transplanted there to work about 12,000 years ago

[20:08] <+Vorthon> …Do these masters who want Venus terraformed (Wouldn’t xenoformed be better, since ‘terra’ implies making it earth-like?) have unsual biochemistry, or just bog-standard proteins-in-water biochemistry?

[20:09] <+Tsofian> Life in this Universe has a basis in the theory of Panspermia

[20:09] <+Tsofian> Almost all known life is from a single galaxywide source

[20:10] <+Tsofian> it appears that all the biochemistry has the same basis

[20:10] <+Vorthon> Ah. So the biggest variant would be cases like ‘this world’s ecology uses X instead of Y.’? Like that whole kerfuffle about arsenic-using microbes a few years back.

[20:10] <+Tsofian> in the very distant past a cloud of living matter must have infused the known galaxy and seeded many planets

[20:12] <+Vorthon> I remember being in high-school at the time, and my Physics teacher swearing up and down that they were gonna announce the discovery of microbes on Titan in the lead-up to that.

[20:14] <+Tsofian> They are a species created from the ground up by their masters (who are off screen up till now)

[20:19] <+Tsofian> There is a lot of backstory as to why the aliens have taken 25,000 years to terraform Mars and how the Hive gets to Earth

[20:24] <+Tsofian> The Hive is a collective organism that is made up of a number of castes of giant arthropods

[20:25] <+Tsofian> the reproductives are about the biggest, just as in a termite nest

[20:26] <+Tsofian> they have genetically set responses to stimuli

[20:27] <+Tsofian> Given the same set of conditions they will always respond the same way

[20:27] <+Tsofian> However they have a lot of data inputs so ensuring they “see” a set of conditions as identical to a previous one might be hard to do

[20:29] <+Tsofian> I explain it like this. If you have a set of silverware you can put out things like salad forks but you can’t put out chop sticks and never will be able to

[20:29] <+Tsofian> The Hives appear to have been brought to Earth as active acts of sabotage

[20:30] <+Tsofian> It appears that one of the factions of humans serving the la selpurdi smuggled them to Earth on an Earth vessel

[20:31] <~Dan> Speaking of which, what are spacecraft like? And is aether real in this setting?

[20:32] <+Tsofian> I can answer that if someone can explain the difference between the Ether and the Higgs Field

[20:33] <+Tsofian> From what I have read the Higgs field acts pretty much like what the Victorians thought the Ether would

[20:33] <+Tsofian> We stick with Newtonian mechanics for most space travel

[20:34] <+Tsofian> But we do have a drive that works like the reactionless drive NASA is being confounded with currently.

[20:34] <+Tsofian> Aerolyth also makes really powerful rockets, with a SI a couple of orders of magnitude greater than anything we have now

[20:40] <+Tsofian> The la selpurdi have remnants of a technology that allows FTL travel, terraforming, the ability to build an organism from base pairs to a breeding population, so magic tech

[20:40] <+Tsofian> But much was destroyed in the accident that brought hem to Sol system

[20:42] <+Tsofian> Human military technology is between Victorian and early WW2 depending

[20:42] <+Tsofian> but having huge flying machines does make a difference

[20:44] <+Tsofian> heavy aircraft that can carry even an inch of armor change everything

[20:44] <+Tsofian> although individual automatic weapons are beginning to appear

[20:45] <+Tsofian> a .303 round isn’t tremendously effective against a thing that is a cross between a crab and a mantis and the size of a rhino

[20:48] <+Tsofian> Venus is cooler thanEarth because the clouds reflect so much of the solar energy back into space

[20:48] <+Tsofian> It has large ocean and the continental lowlands are barren basalt plains, very dry and cool

[20:49] <+Tsofian> The uplands are cloudforests with constant heavy rain, but make up only around 20% of the land area

[20:49] <+Tsofian> The rivers that run down from the cloud forest rain zones to the seas dwarf even the Amazon

[20:50] <+Tsofian> Mars is also a water world. We use the Schifferelli map, not the Lowell one

[20:51] <+Tsofian> the chlorides give it an unpleasant taint to Earthers

[20:57] <+Tsofian> some stranger stuff from the la selpurdi gene banks

[20:58] <~Dan> In the time remaining, is there anything we haven’t covered that you’d like to mention?

[21:00] <+Tsofian> we have a very actiuve Yahoo group that is always looking for new voices