Posted by saintnexan on December 27, 2018
Posted in: Uncategorized. 2 Comments

So the other day I’m sitting at my desk, just mindin’ my own business, when this fella in a black duster carrying a flaming sword steps outta this black cloud that smells like rotten eggs.

“Got a review job for you. A game of modern-day magic.”

He points at my desk, and a rulebook called Wicked Pacts appears. Out of a cloud of black smoke that smells like rotten eggs.

“Well,” I says, “I can already tell you that the game stinks.” 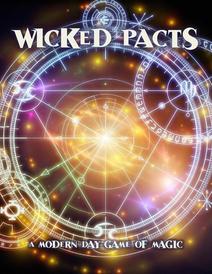 The world of Wicked Pacts won’t be anything new to fans of the World of Darkness or the Dresden Files. In fact, the author described it to me as “the Dresden Files with the serial number filed off”.

Essentially, it’s a version of our modern-day Earth in which magic is and always has been real. Due to witch hunts back in the days when the common folk knew of magic’s existence, modern magicians practice in secret. This secrecy is the decree of the magical Hermetic Order and is enforced by their Praetorian Guard.

Magic itself consists of specific spells rather than the freeform magic of Mage: the Ascension, and is also generally less powerful. However, there’s nothing built into the system itself that prevents mages from blasting away with flashy spells in public, making the mundane world’s ignorance of magic a bit hard on willing suspension of disbelief.

Magic doesn’t work the same way in all places. Adding flavor to the setting are Ley Lines, where supercharged ambient magic creates wildly unpredictable effects, and Dead Zones, where magic doesn’t work at all. The latter provide an opportunity for non-mages to shine and places where magically powerful adversaries can meet in a sort of “neutral ground”.

Other realms exist alongside our own in Wicked Pacts, including the Thicket (the Faerie realm), innumerable specific Hells, an amusingly urban Heaven, and the mysterious, abomination-haunted ruins of Carceris, the prison to some thing that all supernaturals fear. The text vividly describes all of these realms, providing enough detail to use them with a little creativity to get around the lack of actual game statistics.

Supernatural monsters, like mages, also exist in the shadows of Wicked Pacts Earth, and the core rules provide a respectable bestiary.

Note that several of these entries, such as Elemental and Vampire, include more than one power level for the creature type in question.

Wicked Pacts rates Attributes from 1-5 (for normal humans). Skills are based on pools of 1-3 dice, with the die type determined by level of learning (d6, d8, or d10) and the number of dice determined by the level of practical usage. For example, a person with years of study in Spanish who never actually used the language after leaving school might have a 1d10 in the language, whereas someone with minimal Spanish education who speaks it regularly might have a 3d6.

Saving Throws are made by adding a roll of 1d10 to the relevant Attribute.

My thoughts on this mechanic…

Well, on the downside, the chance of a critical success actually drops with increased learning. The system might be better served by going with matching dice on a successful roll, or perhaps by going with degree of success.

On the other hand, the system is extremely transparent and quick to use. My wife and I both absolutely loved it.

The first major step in this process involves selecting the character’s Bloodline — the source of his magical power. (This step applies even to characters lacking magical powers, such as the Ungifted and the Knights Templar. Their gifts simply never manifested.)

Each Bloodline comes with some small perk(s) and, except for Angel Blood, a minor drawback.

Every character must have an Archetype:

These Archetypes are as close as Wicked Pacts comes to classes and determine what sorts of spells the character can cast (if any), what special Talents the character may have, and what Attribute the character uses to cast spells. For example, Demon Hunters can cast Demon Hunter spells and General spells using the Reflexes attribute and can have such Talents as angelic swords and shields and supernatural senses.

Overall, I really like the selection, which allows players to play not just different types of magicians, but very different types of characters in general. On the flip side, players wanting to play the “traditional” sort of brainy bookworm wizard can play a Scribe.

I should mention that all character types have access to General Talents, both magical and mundane, offering still more variety. Players may also choose to take a Complication to earn an extra Talent or an extra Adjustment point. (Adjustment points are used to tweak characters at the end of character creation, adding more Skill points, tweaking Attributes, changing a randomly assigned Background, or adding an extra Talent.)

I would describe the Skills as moderately specific. Blades, for example, covers all edged weapons, and Computer Operation covers all aspects of computer use, including program writing and hacking.

Spells are treated as individual Skills. Spellcasting involves a Skill roll and a Magic Point expenditure accompanied by a gesture and an invocation. Every Spell has an associated Magic Lore Skill that sets the limit on the level of that Spell. Magic Lores, in turn, are either Archetype-based or fall under General Spells that all mages can use.

The spell lists are fairly extensive. The General Spells cover a lot of ground, including basics like lightning bolts and magical shields. If anything, the list may cover a bit too much ground, as some of the Spells would seem to fall under the purview of other Magical Lores.

For their part, the Archetype spells are quite flavorful. A personal favorite of mine is the Angel Slayer Spell “Brimstone Shift”, which teleports the mage via a trip through Hell.

There are two exceptions to this format.

The first is Miracles of Faith, which do cost Magic Points but which are not purchased as Skills and do not require Skill rolls — the Templar simply starts play with one Miracle and may never have more than two. I like the way this distinguishes Miracles from Magic, making them something special.

The second is Petty Magic, which does not involve Skills purchased for individual spells — if the mage knows Magic Lore: Petty Magic, he can cast all Petty Magic spells using the Lore rating as the casting Skill with no Magic Point cost at all. These are, as the name implies, relatively weak but handy cantrips like Clean/Polish Item, Freshen Food, Minor Illusions, and Prestidigitation. This allows a mage to perform numerous cool little tricks without having to burn a bunch of Skill points in order to do so.

Wicked Pacts breaks combat down into two-second turns and rounds long enough to accommodate every participant’s turn. Combatants may take as many as four actions on a turn, albeit with a +3 target number per action after the first on all actions taken (e.g., taking four actions would result in a +9 TN for all four actions).

Initiative is determined by the Reflexes score plus a die roll — 1d8 for PCs and important NPCs, 1d6 for garden-variety thugs.

Damage is randomized by dice pools that vary in number and size of dice, and armor reduces damage. A medium pistol, for example, does 2d6 points of damage. That may not seem like much when you consider that an average person has around 24 Hit Points, but a critical hit inflicts double damage, and any hit calls for a roll on the hit location table that may inflict yet another damage multiplier. Factor in multi-actions and auto-fire, and combat can end pretty quickly — just how I like it.

PCs begin play with at least three Scene Points, which may be used to:

I’m always in favor of these dashes of narrative control, so this is a plus for me.

Every PC is associated with one of the Major Arcana of a tarot deck — either chosen or randomly drawn.

Players may use Major Arcana to:

The GM can use Major Arcana to introduce complications to the story based on the meaning of the card and can use Minor Arcana for the reverse of the effects they can produce for PCs.

I like the thinking behind this mechanic, but I’m not thrilled with the fact that players have to turn over upside-down cards to the GM and don’t get a card of their own. It feels like such players are being left out of a fun aspect of the game. I’d rather see the GM draw one card per player and the players keep the cards they draw, regardless of their orientation.

The art in this 250-page full-color hardback manages to be both stylish and evocative. My only regret is that there isn’t more of it. The vast majority of the art consists of very well-done character images.

The layout could use some work. The headers are attractive enough, but the body text needs some tightening up. The text orphans are particularly annoying.

The writing is professional but needs another pass from the editor to clean up typos that are too frequent for my tastes. Most of these are simply annoying, but some negatively impact the content. For example, the Earth Elementals, according to the text, are capable of lobbing cars, yet their stats make them no stronger than normal humans.

Regrettably, the book lacks a glossary or an index.

This is one of those games that’s more than the sum of its parts. The setting isn’t particularly new or innovative, but it’s certainly entertaining, and the system makes playing in this world the most fun that my wife and I had at GenCon 2017. I highly recommend you give this one a look. It may well become your new go-to for dark urban fantasy.