[19:31] <+MarcL> Hello, and thank you! My irl is Marc Langworthy. I have my own little enterprise, Red Scar Publishing.

[19:31] <+MarcL> We are currently on Kickstarter with the Devil’s Run roleplaying game.

[19:32] <+MarcL> Which is a crazy and wild post-apocalyptic setting that draws upon the board game of the same name 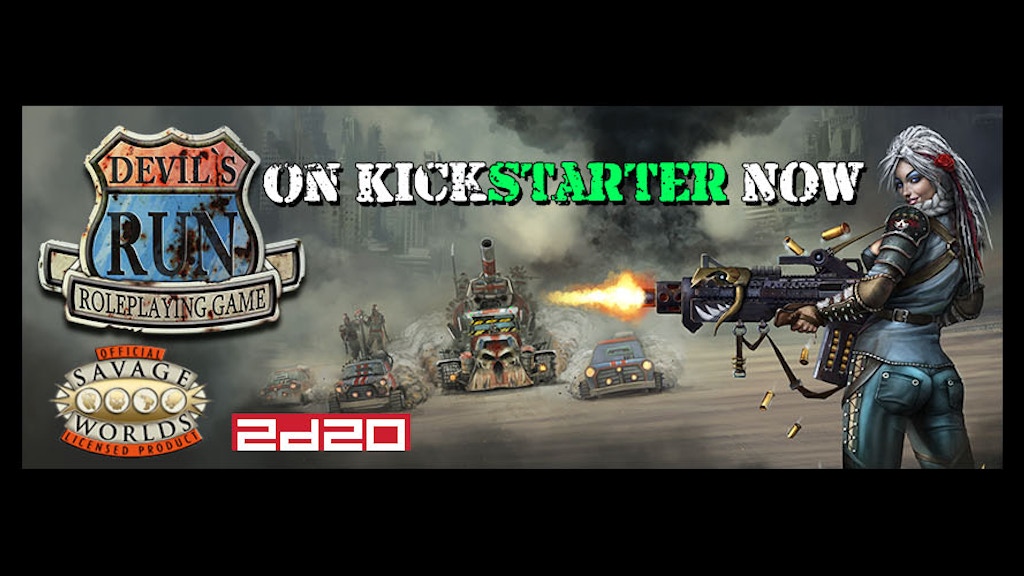 [19:33] <+MarcL> After an unsuccessful attempt kast year, this is our second attempt at Kickstarting the RPG

[19:35] <+MarcL> This time round, we are honoured to be the very first licensee to be using Modiphius’ popular 2d20 system, which has been used for Conan, Infinity, John Carter, Mutant Chronicles, and Star Trek

[19:38] <+MarcL> Being a line developer for Mutant Chronicles and Infinity, I am definitely uniquely placed for implementing the 2d20 system with the Devil’s Run setting

[19:38] <+MarcL> We also have the full support of the Devil’s Run licensor, Word Forge Games, who have been absolutely amazing in helping get the Kickstarter relaunched

[19:39] <+MarcL> in addition to and supporting the RPG, they have helped us pull together a completely new standalone expansion of the Devil’s Run board game

[19:40] <+MarcL> with miniatures and missions based around the introductory scenario for the RPG. You don’t need one to play the other, but the two together will certainly help enrich the whole experience.

[19:42] <+MarcL> I’ve also been lucky enough to contribute to the Devil’s Run background lore from the very outset, having written up several of the backgrounds for the factions and produced a short story for an anthology

[19:42] <+MarcL> pulling the system and setting together is a real pleasure and passion 🙂

[19:44] <+MarcL> Speaking of the Devil’s Run setting, I would most liken the setting for the corebook – the devasted ruin of west coast U.S – to Mad Max mixed with The Walking Dead

[19:45] <+MarcL> I say setting for the corebook, as we have plenty of lore developed for the rest of the world, which we’re very much hoping to explore with stretch goals!

[19:47] <+MarcL> the core setting for the rulebook, however, will explore the conflict arena introduced by the board game, the San Francisco ‘Safe Zone’, and the factions that fight for resources there

[19:50] <+MarcL> The ancient threat of two long-time aversaries: nuclear war between the U.S and Russia

[19:51] <+MarcL> The U.S weren’t just graced with nuclear bombs, though. They were also hit with airbursts from a chemical virus termed the Revenant Virus

[19:52] <+MarcL> Which is the reason that large population centres are empty

[19:53] <+MarcL> There will be mutations aplenty, largely due to the Revenant Virus

[19:55] <+MarcL> There will most definitely be non-combat scenarios included! The RPG draws on a vehicular combat game, so there will be plenty of fun elements where that is concerned

[19:57] <+MarcL> But I’m also big on story myself, including story-driven games. So there will be plenty of opportunity to develop character, roleplay scenarions, and influence the setting through non-combat avenues

[19:59] <+MarcL> It does indeed, Dan. It’s the engineered virus that creates zombies, not zombies biting other people. We’re 20-odd years down the line from the Apocalypse too, which introduces that scope for mutation

[20:00] <+MarcL> and to further answer Akyla’s question, even the introductory scenario has options that don’t involve combat or vehicle chases

[20:02] <+MarcL> you could liken it to the t virus from Resident Evil, with the hulking mutation in the 2nd film (I forget its name)

[20:04] <+MarcL> nothing on a kaiju scale 🙂 but yes, there will be mutated critters to trouble the PCs with

[20:06] <~Dan> It’s my understanding that 2d20 comes in varying degrees of complexity, with Mutant Chronicles being the crunchiest and John Carter being the lightest. Where does Devil’s Run fall?

[20:07] <+MarcL> Somewhere in the middle, leaning towards the savagery of Conan

[20:10] <+MarcL> combine an atrribute with a skill’s Expertise to obtain the Target Number (TN)

[20:12] <+MarcL> this equates to the number of successes required to succeed

[20:13] <+MarcL> I mentioned skill Expertise as skills have two values – Expertise and Focus

[20:14] <+MarcL> Expertise relates to the TN, Focus relates to number of successes. If any die equal the skill’s Focus number or under, it grants an additional success – so two for one

[20:15] <+MarcL> which allows players to succeed at higher difficulty tasks

[20:16] <+MarcL> Threat is a yin-yang type system. Players can rely on it to boost their successes, but the GM can then use that Threat later to introduce problems and complications

[20:17] <~Dan> I take it that it’s impossible to get five or more successes without Threat?

[20:18] <+MarcL> Players also benefit from Fortune Points – a type of hero point – that let them buy a d20 for a test that automatically sits on a 1

[20:19] <+MarcL> so if they have Focus in that skill, the 1 from the Fortune Point actually nets 2 successes

[20:20] <+MarcL> those successes aren’t wasted, but get converted into Momentum

[20:21] <+MarcL> Momentum can also be used to purchase extra dice – in lieu of Threat – or power extra effects specific to the scenarion

[20:22] <+MarcL> Momentum can even go into a group pool, representing the forward momentum of the entire group in a scenario

[20:23] <+MarcL> Threat can take a little getting used to, but is really useful for driving the story

[20:29] <+MarcL> But there is also some wierd and wonderful tech that has been introduced by some of the geniuses of the day

[20:31] <+MarcL> plus the rest of the world haven’t stood still, though they’ve suffered with their own problems because of the nuclear fallout

[20:33] <+MarcL> we have some great plans for India and its neighbours, for instance. A kind of dystopian utopia built on the detritus of the old world

[20:34] <+MarcL> we’re hoping to explore these places with stretch goals

[20:35] <+MarcL> the core setting will offer San Francisco and its surrounds as a playground, with an overview of the rest of the world

[20:35] <+MarcL> the PCs will either belong to a faction or be freelancers

[20:36] <+MarcL> out on the road, striving to survive. Maybe with a view to building their own stronghold and faction

[20:37] <+MarcL> do they try and hold on to humanity – which is seen through a different perspective than our own – or plumb any depth to survive

[20:39] <+MarcL> The two largest that vie for San Francisco are the Law Haulage and the Haul’s Angels

[20:40] <+MarcL> The Law is made up of bad people masquerading as law-persons, some who are very reminiscent of YMCA! Haul’s Angels are the post-apoclayptic Hell’s Angels

[20:41] <+MarcL> Skinners are a nasty bunch of people who are off-shoots of the Haul’s Angels

[20:42] <+MarcL> Justice are a matriarchal group who hold fast to their own laws and religion… I have a lot of love for them, as I wrote their lore 🙂

[20:43] <+MarcL> BritAttack are refugees from Texas, banded together under their First Governor who led them to safety. He is a bit crazy and drew on his old-world heritage to create the faction

[20:45] <+MarcL> A cult of death built around Vodou and the Day of the Dead observance

[20:47] <+MarcL> A charismatic houngan began building an underground cult shotly before the apocalypse, amalgamating certain elements of vodou and catholicism. The cult became truly empowered when the dead started walking

[20:48] <+MarcL> Now they tinker with the Revenant Virus, use it as a weapon to toture, threaten, and dominate

[20:49] <+MarcL> There is also a force for good too! I’m working with a great Native American writer – Lee Francis – to create their story for the Devil’s Run

[20:57] <+MarcL> As detailed as you’d like it to be 🙂 We’re working on options for vehicles to be relatable as supporting NPCs for both 2d20 and SW. Rather than just paying for or finding an upgrade, the character and vehicle can begin to evolve together.

[20:58] <+MarcL> There will be crossover rules for the board game if folks want them

[20:59] <+MarcL> But the main focus is to keep the action and the story fast-flowing in line with the very best action movies

[21:04] <+MarcL> The ruleset will be along the lines of Conan gritty. The setting draws upon a lot of the zaniness introduced by the board game, but with plenty of opportunity to take the game in a more gritty direction if the group wish. That’s partly why Los Nigromantes are there

[21:11] <+MarcL> We have a campaign book lined up as a stretch goal, plus plenty of faction lore to explore

[21:12] <+MarcL> there is also the rest of the world to look at, which will allow the game to grow beyond the rough post-apocalypse of the west coast

[21:13] <+MarcL> I’ve also been working with comic book artists to explore the early days of some of the factions, with a view to taking them from the post-apocalypse towards the current timeline of the setting

[21:18] <+MarcL> Unless anyone has any other questions, that would be much appreciated 🙂