[19:31] <+KEM_Christian> Hi everyone! My name is Christian Nommay. I’m the founder of Knight Errant Media and the creator of Titan Effect.

[19:32] <+KEM_Christian> Titan effect is an espionage and science fiction setting for Savage Worlds, somewhere between Tom Clancy and the X-Men.

[19:33] <+KEM_Christian> Titan Effect is set in a contemporary world where psychic spies clash with genetically enhanced soldiers in a secret war in which the future of human evolution is at stake. Players take on the role of psychic operatives trained in black operations, and working for the international clandestine organization known as the SPEAR. They have the task to perform dan

[19:34] <+KEM_Christian> They have the task to perform dangerous missions all over the world and fight against dangerous creatures and organizations. Some are there to make a difference, others for the thrill or because they have no other place to go. 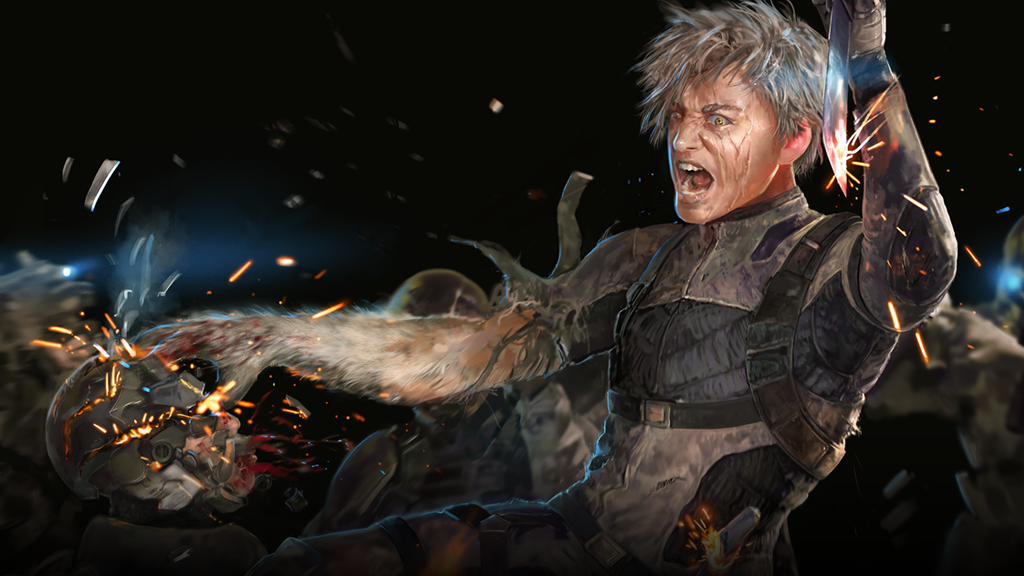 [19:36] <~Dan> And by the way, I may be asking questions that we’ve already discussed previously just to get it “on the record”. 🙂

[19:38] <+KEM_Christian> No, the PCs play only psychics. However, a future sourcebook is planned to play rogue genetically enhanced soldiers.

[19:40] <+KEM_Christian> There are four categories of psychics in Titan Effect. Biokinetics who alter their own DNA and boost their physical abilities and more.

[19:40] <+KEM_Christian> ESPers who see things from a distance with their minds and enhance their senses or anticipate danger.

[19:42] <+KEM_Christian> And finally the Telepaths can read people’s mind and control them, they can also create mind illusions.

[19:42] <+KEM_Christian> To simulate their abilities we use the Super Powers Companion for Savage Worlds

[19:43] <+KEM_Christian> However, we recently added alternative rules to play psychics with only Savage Worlds Core Rules for those who don’t have the SPC.

[19:44] <+KEM_Christian> But I highly recommend the SPC if you want to enjoy the setting as it was initially designed.

[19:47] <+KEM_Christian> We use a custom version of the No Power Point setting rule and the Arcane Background: Psionics

[19:48] <+KEM_Christian> An alternative version of the Demo Kit is available at DriveThruRPG with these rules, but the final version will be more complete.

[19:49] <~Dan> What sorts of powers do the genetically altered soldiers have?

[19:50] <&Le_Squide> (Has anyone asked any questions about the mission generator yet?)

[19:51] <+KEM_Christian> For the moment we have two different kinds of augmented soldiers. Neo-therianthropes who are basically werebeasts, but without the supernatural elements (they don’t change with the moon and they are not allergic to silver, etc.)

[19:52] <+KEM_Christian> the second kind are Chimeras, some sort of human-animal hybrid. Each series of chimeras have different abilities based on the animal genes in their DNA.

[19:53] <+KEM_Christian> For example, you have Akheilos series who have been enhanced with shark DNA, so they are stronger, can swim and breath under water, are tougher to kill, etc.

[19:58] <+KEM_Christian> There are four steps to the generator: 1) The Mission that determines the type of mission and the objective. 2) The Location. 3) The Opposition. 4) And the Complication(s).

[20:01] <+KEM_Christian> For the Mission you have elimination, espionage, exfiltration, investigation, protection, destruction, recovery, transport and reconnaissance missions. Each gives you ideas of the kind of objective and even mission variations.

[20:02] <+KEM_Christian> For example: a destruction mission could mean for the operatives to sabotage an installation or create a decoy for another team.

[20:03] <+KEM_Christian> If you draw a Joker on the deck you can also combine two different type of missions/objectives

[20:06] <+KEM_Christian> The Location works a bit different than the three others. The suit of the card determines the geographic area (city, countryside, small town/village, etc.), while the value determines the type of location (corporate building, government facility, isolated island, etc.)

[20:07] <+KEM_Christian> The Complications are the fun part of the mission generator.

[20:09] <+KEM_Christian> the characters can be ambushed, receive bad intel for their mission (ex.: “nobody told us their was a tank!”), be caught in the crossfire of two enemy factions, having to face a moral dilemma or be forced to not kill anyone, etc.

[20:13] <~Dan> So is it alternate history, then? Or is technology just secretly more advanced than folks thing?

[20:14] <+KEM_Christian> I think gamemasters will like it, it’s very easy to use and it gives them enough room to build their own plot

[20:14] <&Le_Squide> Tangentially related: Besides the Super Powers Companion, are there any other Savage Worlds books you think would work well with Titan Effect?

[20:15] <+KEM_Christian> Both. Titan Effect’s timeline is based on our history, but some minor changes and alternate events. Genetics and some technology are far more advanced, but the public isn’t aware of what is really going on.

[20:16] <+KEM_Christian> We are discussing with Feral Games to make Titan effect and Ghost Ops RPG compatible.

[20:17] <+KEM_Christian> We have also created an Equipment point system that could easily be used for any other modern settings based on military or espionage.

[20:22] <+KEM_Christian> Each player receives 10 points and a starting weapon before the mission and they chose how to spend it.They buy armor, equipment, weapon accessories and of course weapons. For each additional rank after Novice they receive 5 more points to reflect their rank in the SPEAR and the danger of their missions.

[20:23] <&Le_Squide> How easily would that be adapted to other settings with weirder elements?

[20:23] <+KEM_Christian> It’s more easy for the players instead of keeping track of money and it reflects the reality of agents who don’t have to pay for their equipment

[20:25] <+KEM_Christian> Well, it depends. If the players are working for an organization, a military or intelligence agency, the system could be used for them.

[20:32] <&Le_Squide> I came in late so I very well may have missed this if it was asked, but have you talked about why you went with Savage Worlds for this, as opposed to a different system?

[20:34] <+KEM_Christian> Titan effect is a very cinematic universe and we wanted a system that could reflect that. We were already fans of Savage Worlds since the first edition so it was a no-brainer for us.

[20:35] <+KEM_Christian> However, we also plan to convert Titan Effect to other rules system in the future

[20:36] <&Le_Squide> Oh! Are there rules for playing Chimera soldiers, or are they intended only as antagonists/opposition as part of ARES?

[20:38] <+KEM_Christian> Only as antagonist in the book setting, but there will playable in a future sourcebook. In fact, I’m also working on a comic book adaptation and the main character is a rogue augmented soldier working for the SPEAR.

[20:41] <+KEM_Christian> I initially developed the universe to become an animated series project, a comic book, and eventually a role-playing game.

[20:45] <~Dan> You mentioned creatures earlier. What sorts of creatures are there, and where do they come from?

[20:47] <+KEM_Christian> Genetically breed and enhanced soldiers. Most of them are created by a private military company named ARES who work for an old secret society. Others are developed by TYPHON, a bio-terrorist group with a post-humanism agenda.

[20:48] <~Dan> So these are distinct from the genetically modified soldier?

[20:49] <+KEM_Christian> those who re breed are the neo-therianthropes (the werebeasts I mentioned earlier). The Chimeras are humans who have been abducted and enhanced with animal DNA (if you’ve read The Island of Doctor Moreau you get the picture)

[20:50] <+KEM_Christian> There are a lot of references to Greek mythology. In fact the neo-therianthropes  and chimeras are heavily inspired by mythological creatures.

[20:52] <~Dan> How advanced is the technology available to SPEAR agents?

[20:54] <+KEM_Christian> SPEAR’s weapons and gadgets are based on real-life technology and upcoming technology, like cloaking device.

[21:00] <+KEM_Christian> Our first supplement will be a plot point campaign. We have three other sourcebooks planned: a world atlas (with information about regional organizations and places of interest), a manual for the players with rules to play augmented soldiers and create their own HQ.

[21:01] <+KEM_Christian> The last one will detail each major organizations and even suggestions to build campaign from the bad guys point of view.

[21:02] <&Le_Squide> Two more questions if you’ve got time for them, one serious, one DEADLY SERIOUS

[21:07] <+KEM_Christian> The idea of Titan Effect took place in my head after with one of my partners we ran a MGS3 homebrew campaign for Mutants & Masterminds ten years ago.

[21:11] <+KEM_Christian> Maybe Fate or another one. We are looking for possibilities and make sure each system is a right fit for Titan Effect

[21:16] <+KEM_Christian> Yes, I’d like to mention that every backers will have access to a work-in-progress of our setting once our Kickstarter ends. So players and gamemaster will have everything they need to start running Titan Effect.