[19:31] <+IanGibson> Hello. I’m Ian Gibson, creator of Gauntlets & Goblins, a role-playing game for young or inexperienced players that uses cards and simple dice mechanics. I’ve been making games for friends and family ever since falling in love with a friend’s copy of Hero Quest when I was 12, 20 years ago. This is the first game I’ve brought to the public. (done) 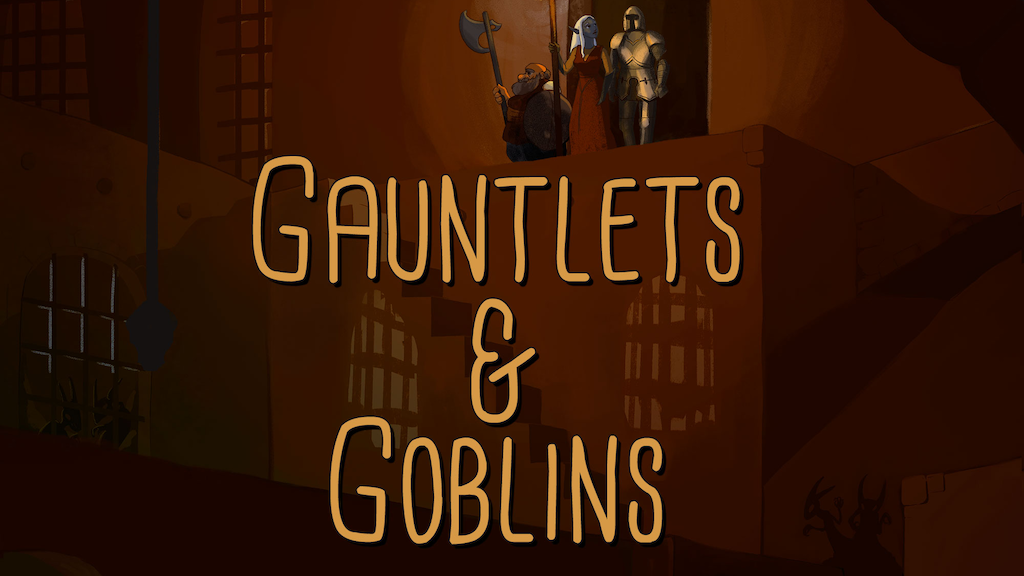 [19:35] <+IanGibson> Loosely. We’re still working out if we can include it. So far, the main location is that of Mistvale, a town shrouded in fog that’s mystically connected to all other points in the world.

[19:39] <+IanGibson> We’re trying to be a sort of gateway to the more traditional games, so it’s quite familiar. The main differences is in presentation, I’d say. Keep the adventure high while still keeping things appropriate for young audiences. That said, what’s ultimately in the game (and what’s appropriate) is up to the GM running it.

[19:42] <+IanGibson> Gauntlets leaves racial choice up to the players. Since the stats in the basic box are all derived from equipment and class, you’re free to be an elf, cat, onion, whatever suits you. That said, we have an expansion planned to step players up to more traditional games that will have racial modifiers.

[19:45] <+IanGibson> The basic set uses a standardized card for each class. The mock ups are in the playtest pdf. Is there way to show that here? Just a link to the playtest on gdocs?

[19:47] <+albedoequals1> Are there any restrictions on who can use what gear?

[19:48] <+IanGibson> Nope. Class determines starting gear, but anyone can use anything they find. You’re free to mix and match over a long game.

[19:50] <+IanGibson> Sure. If that’s how you want to play it, it’s legal. It might not synergize well with the shield, but you’re perfectly free to do it. The class abilities in the planned advanced set will lend them to certain play styles as well.

[19:52] <+SandyFortune> Sort of back to the setting question, will there be any quick example scenarios or anything in the book to give ideas for new GMs? Or is that part of what you’re working out if you can include?

[19:57] <+IanGibson> We will be including 4-6 half hour scenarios to give GMs an idea of how they can use the system and to have some adventure fodder along the way. Maps my end up being rough diagrams, depending on budget.

[19:58] <~Dan> So I see you use images rather that words on the character sheet… Can you tell us what the pictures mean? (I’m assuming that the arm is Strength. 🙂 )

[20:01] <+IanGibson> Yup. Muscle is physical acumen, so if you need to bust something down, jump a pit, or maintain balance on a slope, it’s all muscle. The mask represents the character’s guile, lying, sneakiness, or skill with disarming and placing traps. The book represents the character’s knowledge. The magnifying glass is their detection skill, used for spotting things

[20:03] <+IanGibson> Hearts represent the character’s overall hardiness. It’s not rolled itself, but determines how much damage they can take before falling over. In short, HP.

[20:07] <~Dan> Does anything differentiate between characters of the same class?

[20:09] <+IanGibson> Nothing mechanically in the basic set, no. It’s grab and go. We opted for ease over depth in this regard.

[20:12] <+IanGibson> There are three levels of quality for every equipment card, along with various magic items that the players can collect. As an optional rule, you can grant each player an extra heart every once in a while to keep pace with the improved weapons. Monsters would scale to the PCs.

[20:15] <+IanGibson> In the basic set they don’t, but by the same token, the difficulty of performing actions is typically just to roll a single success, so generally it will be in line. The thrill of accomplishment and growth in power comes through the items.

[20:17] <+IanGibson> If playing a campaign, GMs can reward players either with specific cards set aside for the adventure, or draw them randomly (recommended 1/PC). Items can be traded in towns to shops.

[20:17] <+SandyFortune> Have you thought about including blank item or spell cards so people can sort of customize their game? Like if their story has them hunting for something and they want to keep it around? Or do you want to keep the item list controlled since that’s how they improve?

[20:20] <+IanGibson> That’s actually a great idea. I think we can add some blanks for that purpose. I’ll have to review drivethrucards pricing and see if we can get that done.

[20:23] <+IanGibson> Well, for adventuring actions like moving and talking and whatnot, you roll your stat on the indicated number of d6s. Each result over 3 (4,5,6) is a success. For the majority of actions, just one is enough.

[20:24] <+IanGibson> For combat, you roll the number of dice on your weapon and each success is one damage done.

[20:25] <+IanGibson> They don’t unless something happens like you get hit by a monster with grab and need to break free.

[20:29] <+RachelLee> I recently did a playtest with a couple of friends (all new to RPGs) and they found the system to be really intuitive, and great for first-timers who don’t have spare time to invest in learning a complicated system.   We had a lot of fun 😀

[20:33] <+IanGibson> No, it doesn’t. Generally speaking, it isn’t necessary with the higher end rate of success. One of the reasons we went with the simple “roll to damage” combat style was because we felt that missing wasn’t fun.

[20:36] <+IanGibson> Not by default anyway. We encourage GMs to come up with capture scenarios for TPKs. As long as one party member ends the fight standing, everyone wins. Death is optional.

[20:39] <+IanGibson> Really simple. Each spell is pretty broad in scope. Each spell that a character has can be cast on one target at a time, for as long and as many times as they like.

[20:40] <+IanGibson> So for example, if a character has Enlarge, they can make someone huge, but if they want to cast it on someone else, the other has to be dispelled first.

[20:41] <+IanGibson> Spells can be swapped out when resting or by use of the spell book item that let’s them consider learning new spells at the cost of discarding old ones.

[20:44] <+IanGibson> There are going to be around 20 spells and I think around as many magic items as well. Magic items will be added to by anyone with the glittering gold tier.

[20:46] <~Dan> I don’t see any damage-causing spells in that file you linked earlier for the character sheets. Is that deliberate?

[20:48] <+IanGibson> Yes. Mages and clerics can use a wand to deal damage from afar, but we saw the mage’s role as one of control/support rather than the glass cannon. That said there are expansion plans for some exciting offensive tricks for the mage.

[20:50] <~Dan> I also note a lack of bows. Is that meant to keep the ranged combat in the wheelhouse of the Mage and Cleric?

[20:52] <+IanGibson> That was largely due to wanting to keep everything one handed so the two item rule didn’t have any exceptions. The advanced set later will feature both bows and two handed axes.

[20:53] <+SandyFortune> I saw the cleric’s holy symbol lets them use a spell. They’ll use the all same spells available to mages, right? Like how anyone can use other weapons?

[20:58] <+IanGibson> It will include a list of examples yes, but the core is quick and easy monster making from a list of abilities that “cost” monster attack dice.

[21:01] <+IanGibson> Sure. One I used the other day was the area attack ability. Given the party size, I had four pony sized fire breathing ants. They each had four hearts and attack dice. AoE costs half their dice but hits two targets. So two dice vs two instead of four vs one.

[21:02] <+IanGibson> Essentially, the game tells you what sort of dice pool the baddies should have, then you divide it up among the number of creatures you want to use.

[21:08] <+IanGibson> Well, we have plans to create an advanced set that contains more complex concepts. If we’re still going strong after, we’d love to create a sci-fi and super hero version of the game.

[21:09] <+SandyFortune> The advanced set is what will have the races and two-handed weapons from earlier?

[21:11] <~Dan> What other concepts do you plan on introducing in the advanced rules?

[21:13] <+IanGibson> A stricter sense of positioning. A more robust level system rather than a simple optional rule, one with choices of class abilities. There are plans for Barbarian, Ranger, Druid, and Bard.

[21:15] <+SandyFortune> Will there be many optional rules to make things more complex for the basic set? Like adding stats into combat to mix things up for classes, or anything like that?

[21:17] <+IanGibson> As far as adding stats, no we don’t see that as being part of the game. There would have to be more tuning to ensure it all worked correctly in play, and too many dice being rolled just gets silly. We do try to provide options when we can.

[21:19] <+IanGibson> One thing I would like to address, since I didn’t include it in the pdf that’s currently available is traps and environmental hazards. Essentially, should a PC run afoul of these, any damage they take is held onto until they rest or are healed in combat. It cannot be healed out of combat.