<+VS> I am Venger Satanis.  I’m the High Priest of Kort’thalis Publishing, that’s put out The Islands of Purple-Haunted Putrescence, Alpha Blue, How to Game Master Like A F***ing Boss, and Cha’alt.  Cha’alt is an eldritch, gonzo, science-fantasy, post-apocalyptic campaign setting and megadungeon.

<+VS> Cha’alt has great reviews, and I’m excited that it’s been so well received.  In fact, I’m kickstarting the follow-up, Cha’alt: Fuchsia Malaise. 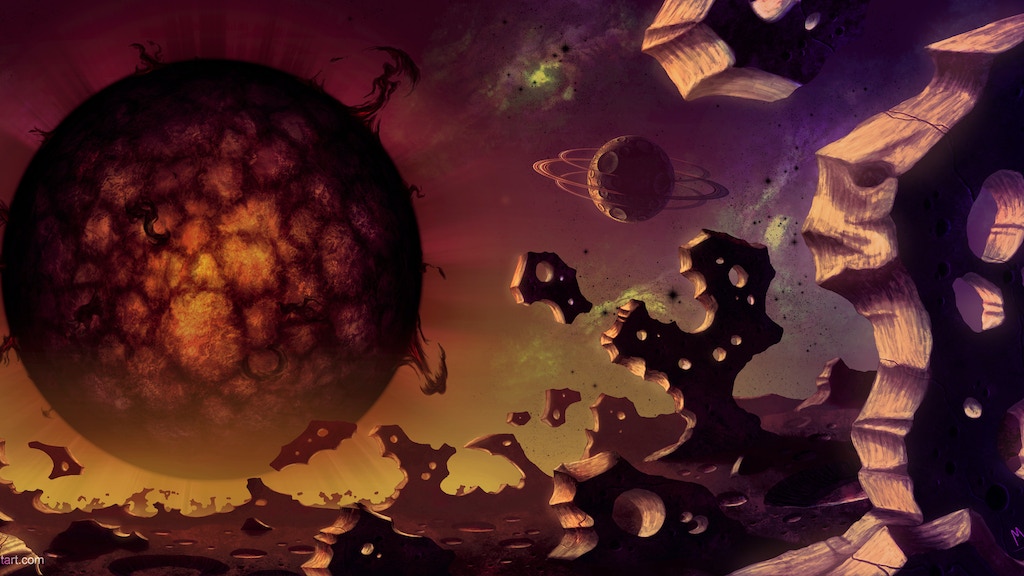 <~Dan> Thanks, VS! The floor is open to questions!

<~Dan> Aside from your general description, what can you tell us about the setting of Cha’alt?

<+VS> It was a “normal” fantasy world, the kind you think of when you picture D&D in your head.  But then the people of Cha’alt developed high-technology and moved away from the Old Gods (Cthulhu, Yog-Soggoth, etc.)

<+VS> And the Old Gods destroyed civilization on Cha’alt.  The people, aided by aliens with high-tech, retaliated.  The war was devastating for both sides.  Now, the planet is mostly a desert wasteland.  done

<~Dan> Can you give some examples of the high-tech you mentioned? How advanced did the society get?

<+VS> Something I alluded to in Liberation of the Demon Slayer, powerful armaments built under the surface as a planetary defense, such as nuclear warheads or photon torpedoes, etc.  Cha’alt has enough technology buried in the sand to make it a hub of the galaxy again, or destroy neighboring planets.

<~Dan> What are the aliens who helped the planet like?

<+VS> Just all kinds of aliens, every type.  Think Mos Eisley cantina, but lots more besides that.

<~Dan> Are they still on the planet, and if so, how many of them do you stat out?

<+VS> Cha’alt has hundreds of NPCs, either with full stats or basic description.  The follow-up book will have probably 100 NPCs all ready to go.  Fuchsia Malaise will be smaller than Cha’alt.

<~Dan> Do they appear as part of a series of encounters? Or do you just say where they are and what they’re doing?

<+VS> Some appear as a list of random encounters, others in rooms doing their thing.  All of them will have some kind of motivation, agenda, faction, etc.

<+danhunsaker> Are any of the alien races playable?

<+VS> Cha’alt has a short description of new elf races the PCs can choose from.  Fuchsia Malaise will include some alien races, too.  Name, short description, a few notes on cultural differences, and at least one mechanical advantage or disadvantage.

<~Dan> Is the game meant to be used with D&D-based OSR systems?

<+VS> Yes, it’s meant to be used with D&D or something similar.  It skews closer to OSR, but you can use it with 5e, if you don’t mind minimal stats and an old school approach.

<+VS> Cha’alt includes my own OSR + 5e (O5R) hack called Crimson Dragon Slayer D20 as an appendix.  Fuchsia Malaise will include a few more optional rules.

<~Dan> Ah, so you don’t need anything else to play?

<+VS> Not really.  CDS D20 doesn’t include a list of spells, but I frequently ask players (especially if they’re new to gaming or D&D) to just tell me what they want the magic to do.  Then I narrate the spell effect for them.

<+polyhedral> Which design element/decision are you happiest with, and why? Mechanical, setting, flavor, anything

<+VS> I really wanted a portion of Cha’alt to be really far out there, crank the gonzo up to 11.  Keeping the most extreme and weird stuff within The Black Pyramid (that’s the megadungeon of Cha’alt) allowed me to scale back on the gonzo everywhere else.  Otherwise, I would have had to tone it down in places.

<+VS> I like my D&D kept open, so I can use fantasy, sci-fi, horror, comedy, or whatever.  That’s a common thread running through most of my work.  Someone compared it to “OSR Rifts” the last time I was here chatting with y’all.

<~Dan> How do you determine what access starting characters have to high-tech goodies?

<+VS> Traditionally, I start PCs out as native peasants that either go out on their own because they have nothing or are forced to search the desert (or pyramid) because a local warlord has a blaster pointed at their backs.  So, they usually have a melee weapon and a few basic supplies.  That’s it.  The good stuff they have to find themselves, kill for

<~Dan> Are all of the D&D classes available, and do you introduce any new ones?

<+VS> I like to limit things just because most of my gaming is 90 minute one-shots on Roll20.  So, cleric, thief, fighter, and wizard are what I usually start with.  Give noobs too many choices and half the session is spent on character creation.  With so little time to game, I don’t have that luxury.

<~Dan> Interesting. Do you design all of your products with that time frame in mind?

<+VS> But if I was using S&W, DCC, or Old-School Essentials, I’d allow whatever character class was in the book.  New classes is one thing I didn’t introduce into Cha’alt.  I feel like we have enough of those.

<+VS> However, I did come out with a book of OSR “feats” and special abilities.  That allows a party of 2 fighters or 3 wizards to differentiate themselves a bit.

<+VS> A few are flavored specifically to Cha’alt, but most are general enough to be useful for whatever campaign you’re running.

<~Dan> Are all of the standard fantasy races available to play?

<+VS> No, it just so happens that I don’t have time for anything else.  When I began my self-publishing journey with Liberation of the Demon Slayer, I only had one kid.  Now, I have five… and my face-to-face gaming is limited to a 4-hour session every other month.

<+VS> Yeah, I don’t want to limit that.  Even if someone comes up with a race I’ve never heard of, that’s fine.  But I limit their special racial abilities to just one thing.

<~Dan> What does Fuchsia Malaise add to Cha’alt?

<+VS> Aside from a few locations, the areas outside of The Black Pyramid aren’t too detailed.  So, Fuchsia Malaise fleshes some of those areas out.  Plus, there are meta-plot hints and scenario seeds in Fuchsia Malaise that are different than the ones in Cha’alt.

<~Dan> So Fuschia Malaise is more of an outdoor adventure setting?

<+VS> Instead of the planet potentially dying from ecological disaster, offworlders intend to subjugate the planet’s population with the new drug that’s colloquially known as fuchsia malaise.

<+VS> Yes, it’s a lot of wandering the desert, lurking in the cities, underground travel, and Elysium – the offworlder base where the drug is manufactured and an army waits for the command to genocide the natives of Cha’alt.

<+VS> It gets people high, saps their motivation, their will… allowing them to be easily led and dominated.  Most people on the drug just stare up at the fuchsia sky.

<~Dan> In the time remaining, is there anything about the book we haven’t covered that you’d like to bring up?

<+VS> I’ve already run a couple of live-stream sessions on the monthly RPG talk-show I co-host with RPG Pundit and Grim Jim Desborough, Inappropriate Characters.  That stuff will make its way into Fuchsia Malaise.

<+danhunsaker> Oh, I was thinking 2 hours for some reason.

<+VS> And I’m trying to get the KS up enough to support fancy hardcovers, not print-on-demand, but the good stuff from offset printers.  Friesens, specifically.  Cha’alt got that treatment, and I’d love for Fuchsia Malaise to get that, too.  But we’ll see.  Still a long ways off.

<~Dan> Thanks very much for joining us, VS!

<+VS> That’s it’s not already written out and proof-read, sitting on my computer.  A lot of it is written down, but not in the proper form, plus I have to re-write everything so it’s in the best shape.  I do that will all my books.

<+VS> No prob.  Unless anyone has any last minute questions (which is cool by me), I’m good.

<~Dan> Okay! If you’ll give me just a minute here, I’ll get the log posted and link you!

<+danhunsaker> A whole Q&A without one mention of a bestiary? I’m shocked.

<+VS> I throw in new monsters all over the place, but they’re not confined to a certain section of the book, like a traditional bestiary.