[19:36] <+pruttm> Hello.  My name is Pete Ruttman and have created Secret Agents of CROSS.  A Setting for Savage Worlds.

[19:39] <+pruttm> Secret Agents of CROSS is a full-color 170-page setting book.  It is your guide on how the world of CROSS operates, how to make player characters, and how to run CROSS missions steeped in secret spy stuff, religious history, modern terrorism, and the supernatural. 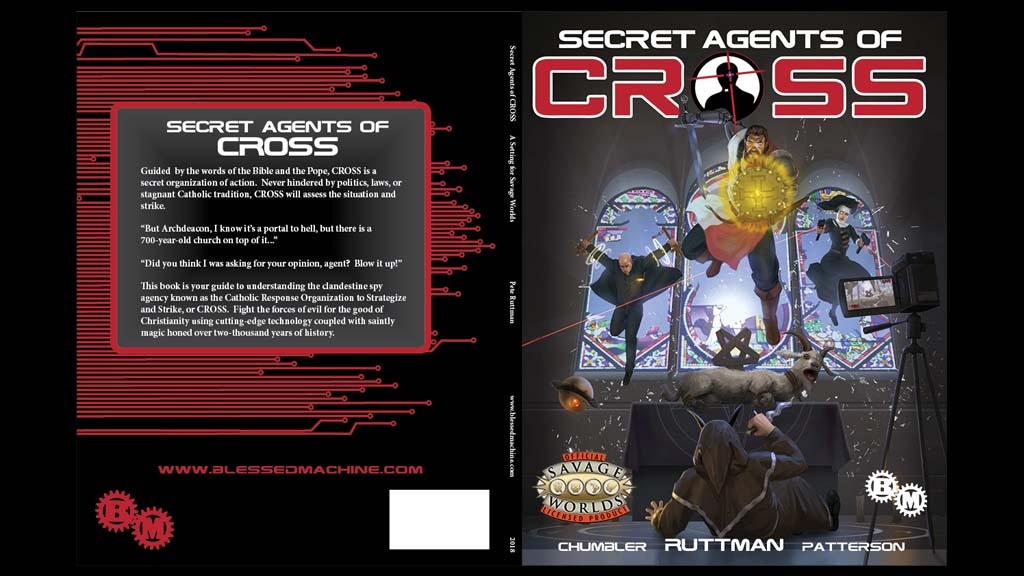 [19:40] <+pruttm> You play Catholic secret agents that work for a rogue Vatican cardinal

[19:41] <+pruttm> There are ten Roles to choose from to base your character on.  However, they aren’t required.

[19:42] <+pruttm> Correct Savage Worlds  usually offers templates and so I followed suit and created those for the game

[19:44] <+pruttm> If you know the show Leverage think of that sort of make up of characters but instead of working for themselves they work for the Vatican

[19:44] <~Dan> Are they official functions of the organization? Like, do agents speak in terms of being a Crusader, an Exorcist, etc.?

[19:46] <+pruttm> I would say they may use those role names not not in a formal way.  They usually address each other as Agent unless they have a religous title like Sister or Brother

[19:46] <~Dan> I watched your KS video, and it made the organization seem pretty high-tech. Is this a modern-day setting?

[19:47] <+pruttm> yes it is modern with slightly futuristic technology

[19:47] <+pruttm> CROSS makes its own gear in the Congregation of Technology Services if there aren’t existing in the world already.

[19:48] <+pruttm> they have access to devote people all over the world and can get access to technology breakthroughs to use as they engineer need creations

[19:49] <+pruttm> I would say the entire world is slightly ahead of our own world

[19:50] <+pruttm> I would say rare and government funded.  Not publicly available

[19:53] <+pruttm> Savage Worlds has various generic powers which you pick and then apply trappings which give it a name and some minor changes.

[19:54] <+pruttm> So Puppet would be generic Mind Control, but I would define it as “Repent” and when cast it would cause the target to need to repent his sins

[19:55] <+pruttm> SW has a Faith skill for this where you need to hit a target number with the die type you purchased for Faith

[19:56] <+pruttm> Powers have a ranking so using them may have penalties if you are low ranking and the power is high ranking.  Additionally each Power costs power points to cast and the default is 10 pp.

[19:58] <+booke63> But also CROSS has resources including knowledge of supernatural…demons, hell, corruption, evil, I’d think? (sorry I”m slow)  Such things tie to mechanics too, no?

[19:59] <+pruttm> Sure, exorcists generally have skills about the supernatural world

[20:00] <+pruttm> They also develop gear that can affect certain kinds of supernatural

[20:01] <+pruttm> One rifle can do damage to a demon possessing a person without hurting the person, as an example.

[20:03] <+pruttm> I made sure to offer options for a team without an exorcist

[20:03] <+pruttm> demons aren’t guaranteed on a mission, but if they do show up they will have something in the safe house if they have no exorcist

[20:03] <+pruttm> some other Roles can deal with demons, but not as well as an exorcist

[20:06] <+pruttm> Well, demons come to earth as spirits.  They can possess humans which gives them a lot of ability to create mayhem.

[20:06] <+pruttm> They summoned they are essentially black smoke and will attempt to possess someone

[20:10] <+pruttm> There are demonspawn which would fill that area.  They are soulless monstrosities

[20:12] <+pruttm> Demonspawn are magical creations made in hell.  Demon offspring would be human offspring created by the mating of demons/angels and human women

[20:14] <+pruttm> This mating created several additional human races that has been heavily diluted by breeding over time

[20:14] <+pruttm> but you can have some innate abilities if you choose an angelic race

[20:16] <+pruttm> Nephilim have some arcane resistence and are extremely beautiful.

[20:18] <+pruttm> demons are fallen angels, so I just define it as angelic dna from the breeding of angels and human women

[20:19] <~Dan> Oh, so Rephaim are just another kind of offspring, not demonic by definition?

[20:23] <+pruttm> My enemies chapter is called Adversaries which attempts to show that shades of gray are in full force

[20:23] <+pruttm> an angel may be an adversary in a particular mission for example.  A rare situation to be sure

[20:26] <+pruttm> other mythologies occasionally are used.  They Grey Wolves have supernatural abilities from Turkic myth

[20:27] <+pruttm> Asena a she-wolf leads a band of lycanthropes.  They are essentially acting as mercenaries, but can manifest werewolf forms when necessary

[20:29] <+pruttm> Asena shifts to a large wolf, the band of lycanthropes are wolfman forms but very animalistic

[20:31] <+pruttm> Vampires are in the bestiary in Savage Worlds core book and would fit appropriately but no mention of them in the CROSS book itself.

[20:31] <+pruttm> I have a one sheet mission that will address them at some point

[20:37] <+pruttm> James McDonnel was in St. Peter’s Square when Pope John Paul II was nearly assassinated.  After the pope failed to act to protect himself and the flock, McDonnell created CROSS.

[20:39] <+pruttm> however he monitors everything the Pope say and does and then he and his command staff create proactive missions around those things

[20:41] <+pruttm> He personally divulged CROSS to sympathetic Catholics with money and created a support group of contacts and safe houses all over the globe

[20:42] <+pruttm> the CROSS HQ is called The Manger and it is in the catacombs below Vatican City.

[20:45] <+pruttm> No, the only security change the Pope agreed to was to allow McDonnell to secure up the catacombs and so he was able to renovate parts of it to create the HQ

[20:51] <~Dan> So do the agents have to be circumspect about displaying their supernatural and technological resources?

[20:54] <+pruttm> I’d say hiding supernatural abilities would be more their concern than the tech

[20:55] <+pruttm> there are rival agencies with somewhat similar tech

[20:55] <+pruttm> even an anti-terrorism one that uses drones with AI to do their missions

[20:59] <~Dan> Are there any particular terrorist organizations that they oppose? Do they have their own COBRA?

[20:59] <+pruttm> One group was created by the surviving bloodline of the Cathars and he strives for vengeance against Catholics for wiping out his religion

[21:00] <+pruttm> Another is a Russian using all the medical research from WWII to create armies to create a new Russian Empire

[21:02] <+Diogo_OldSkull> Is the opposition inside CROSS itself? Or are they all good guys?

[21:04] <+pruttm> There is a GM only secrets section with some intrigue potentially in that area.

[21:09] <+pruttm> Yes God is real and Christ is his son and they made Catholicism to follow his preachings.  God/Christ gives powers to some via Miracles

[21:13] <+pruttm> Mostly concern about how I handle other religions that may be in opposition to Catholicism

[21:14] <+pruttm> I mostly just keep that in the history.  CROSS isn’t attempting to push Catholicism on others, they are attempting to protect the flock

[21:17] <~Dan> Is there secular magic, or is all non-miraculous magic demonic by definition?

[21:19] <+pruttm> magic can exist with or without demonic interaction

[21:21] <+pruttm> no they do not.  They drew the line at using magic for good purposes and kicked our a high profile exorcist for trying to control demons

[21:23] <+pruttm> Well, the Kickstarter for Secret Agents of CROSS has 11 days left and I need $600 to be funded.  You can read up on the kickstarter at (Link: https://www.kickstarter.com/projects/965139169/secret-agents-of-cross-for-savage-worlds)https://www.kickstarter.com/projects/965139169/secret-agents-of-cross-for-savage-worlds . There are also links to the Test Drive file there so you can see 34 pages of the book as well as a youtube video with me looking

[21:24] <+pruttm> The budget will go to art for the Adversaries chapter and a few other pieces and then to have an editor do a pass on the text