[19:34] <+LesterSmith> Got hired by GDW while in college. Did a Traveller 2300 revision to 2300 AD. Then designed Dark Conspiracy and several other things. On to TSR where I’m most known for Dragon Dice.

[19:35] <+LesterSmith> Then a bit of freelancing. A long stint in educational publishing. And now back to games for a hobby. Biggest thing so far has been the D6xD6 RPG ((Link: http://www.d6xd6.com)www.d6xd6.com). And a bunch of card games at DriveThruCards.

[19:36] <+LesterSmith> Now have a D13 RPG Kickstarter going. Premium edition, limited editions. One edition with your own name stamped in gold leaf on the front. I’m here mainly for D13 tonight. But I’m happy to talk about whatever.

[19:37] <+LesterSmith> Last thing: I’m typing slower than usual nowadays. Got a weird seizure disorder that makes me even more slow and methodical than in the past. 🙂 [done] 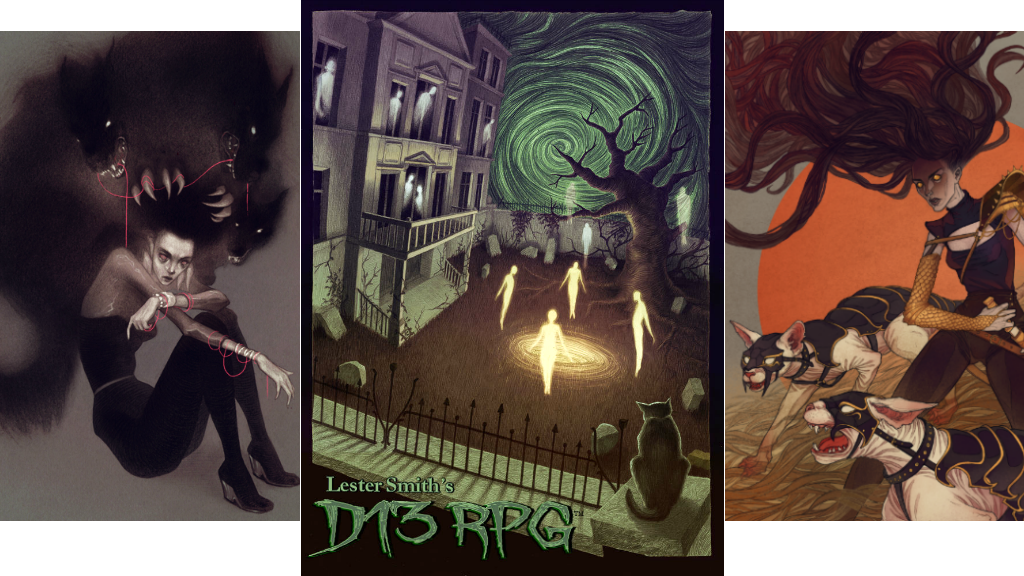 [19:39] <+LesterSmith> Thanks. At heart, it’s a horror game conceived to allow any horror story across time and space, while keeping a campaign thread in the background.

[19:41] <+LesterSmith> I love horror as a theme. But in my experience horror RPGs tend to treat PCs softly compared to real horror stories. They may be scary, or spooky, but there’s little sense of actually being maimed or killed. Only NPCs end up as wet stains on the wall.

[19:42] <+LesterSmith> Then there’s Call of Cthulhu, which doesn’t hesitate to kill PCs or drive them insane. But it’s hard to keep a long-term campaign the way other genres do, when PCs end up in pieces and you have to create a new one every week.

[19:43] <+LesterSmith> In Dark Conspiracy I shot for somewhere any horror story could be imported, but they were also changed by the game setting.

[19:44] <+LesterSmith> And PC experience in DC was to really take a beating in scene 1, then come back with big guns in scene 2. That worked. But I’ve wanted to do something bigger since.

[19:46] <+LesterSmith> Then, after running Brad McDevitt’s It Came from the Late, Late, Late Show a score of times . . . first let me explain ICFTLLLC’s premise.

[19:47] <+LesterSmith> ICFTLLLS (mistyped that C) is about B-Movie actors taking roles in various schlock films. They want their roles to survive for a sequel, or to build fame for better acting gigs.

[19:48] <+LesterSmith> What I noticed was that players got as involved in those movie roles as in any other game. Their actor PCs became transparent while they “got into character” for the film.

[19:50] <+LesterSmith> D13 emulates that by giving you a spirit creature as PC–call yourself guardian angel, demigod, or whatever: you’re embodied in the real world as people who don’t realize their supernatural nature.

[19:51] <+LesterSmith> For each adventure, you randomize a different incarnation, and you hope they’ll survive. Otherwise your connection to reality becomes more tenuous.

[19:51] <+LesterSmith> If they survive, it may be with physical or mental scars, just as in horror fiction.

[19:52] <+LesterSmith> But survivors might also get played again sometime in a later adventure. Or they may become resources of later incarnations in other ways. Past lives is a very real thing.

[19:56] <+LesterSmith> A particular PC might get a glimpse of that truth. Maybe with a psychic power. But the spirit natures are trying to remain hidden, to avoid drawing even more dark attention to any particular setting.

[20:00] <+LesterSmith> The point of all this theory is to pragmatically give GMs a chance to design or import any horror tale from anywhere. I’ve often wanted to run some movie I saw or book I read as an adventure, when I knew my players were never going to see it. (Because I often consume relatively unknown media.)

[20:01] <+LesterSmith> Dimensional travel? If a particular adventure calls for it. Like something set in Lovecraft’s Dreamlands. Or one of this other travel through time, or through space, tales.

[20:02] <+LesterSmith> Phantasm and Hellraiser would justify that as well. The Haunting of Hell House would not. It’s more about ghostly connection.

[20:03] <+LesterSmith> One adventure might call for astral travel. Another might be straight up bug hunt ala Aliens or Predator. Whatever strikes the GMs fancy this week.

[20:04] <~Dan> What motivates the spiritual beings? Are they subtly battling evil?

[20:05] <~Dan> To what degree do you cover handling different times and realities? In terms of technology levels, for exsample.

[20:06] <+LesterSmith> The concept I’ve been working from is beings of light spawned out of darkness – sort of like the Big Bang. They created everything. Darkness tries to swallow them up. So they’ve hidden themselves throughout creation as individual beings. Human or otherwise.

[20:07] <+LesterSmith> They don’t want to be discovered. Sometimes they’re forced to use spiritual powers to affect events, but the darkness (GM) gains power in return.

[20:10] <+LesterSmith> Re times and realities. I’m hoping for enough space to include three sample adventures based on: Beowulf, a modern haunting (Hell House, Paranormal Activity, etc.), and a far future one (influenced by Alien and Hellraiser: Bloodlines). If I’m recalling that last title correctly.

[20:13] <+LesterSmith> That’s a level of detail I’ll be working on the first half of this year. What I’ve play-tested previously just gave a central personality. Michael the Archangel’s champion nature. Coyote’s trickster nature. And so on.

[20:14] <+LesterSmith> But lately I’ve felt players will want some measure of aid from those natures occasionally. The more primitive the setting, the less hidden the being can be.

[20:15] <+LesterSmith> And as I’m expanding psychic powers beyond the initial four I’d play-tested with, that seems a good way to handle spirit involvement.

[20:19] <+LesterSmith> Good question. The darkness is a sort of inchoate presence. But people or beings who draw on it may well have time- or world-spanning goals. Like Julian Sands’ Warlock character. Or a witch encased in a bridge in some CoC adventure or Lovecraft story I vaguely remember.

[20:20] <+LesterSmith> (Come to think of it, that adversary bit could serve as the campaign thread idea I’ve been wrestling with. Thanks!)

[20:23] <+LesterSmith> When designing game mechanics, I always try to include a way that some human could be killed with one attack. But I try to make that extreme very unlikely.

[20:26] <+LesterSmith> In it, a very Focused martial artist could hypothetically kill a human target, with a perfect roll, and if the target is caught flat-footed. But it’s hard to catch out a PC that way. The system has ways for a PC to buy down damage, at the sacrifice of Drama Points, or a combat turn wasted.

[20:27] <+LesterSmith> This week I’ve been conferring with my Drill Sergeant combat veteran son-in-law about D13 “hit points” and max damage for particular weapons.

[20:28] <~Dan> Since we seem to be drifting toward the crunchy bits of the game, perhaps we should address the core mechanic?

[20:28] <+LesterSmith> As in D6xD6, I’m building around a single dice roll each combat turn. That roll determines how fast you act, whether you succeed, and how effectively you succeed. Basically initiative, to hit roll, and damage roll in one.

[20:36] <+LesterSmith> I’m impressed! I keep mine right here in the study, in the mini-fridge at my right hand.

[20:40] <+LesterSmith> But I also like poetry in dice mechanics. Hence Dragon Dice, D6xD6, and now D13. Realizing that a d4 and d10 could generate that easily, I started calculating odds and PC attribute/skill ranges. It transcended gimmick to a logical, evocative mechanic.

[20:41] <+LesterSmith> For one thing, it had four sets of doubles at the low end. The beneficial end. Those begged for special treatment.

[20:42] <+LesterSmith> Doubles always succeed, even if they’re above your attribute+skill range. If you’re rolling against a rating 7, for example, an 8 of double 4s succeeds.

[20:48] <+LesterSmith> And here’s the bit of personal touch beyond those numbers. Easy tasks are roll, see what you get, and reroll one of the two dice if you like. Average are roll and stick with what you got. Difficult are roll and the GM can make you reroll the d4. Uncertain are you roll the d10 and the GM rolls a hidden d4.

[20:52] <+LesterSmith> It means you as player have a good idea of success or failure, based on your d10. But if it’s sitting close to target number, you can’t be quite sure what the DM rolled to add on. Uncertain tasks are things like negotiating, lying, haggling, trying to hit a hidden enemy with a tossed rock, and so on.

[20:53] <+LesterSmith> I.e. You *think* the police officer bought your excuse about the body on the floor and the knife in your hand. But you aren’t quite sure.

[20:55] <+LesterSmith> You *think* you pronounced the incantation correctly. But until the spell takes effect, you’re sweating it.

[20:59] <+LesterSmith> Spirit being is by choice. Incarnations are random. Some of this will sound like D6xD6; some of it is specific to D13.

[21:07] <+LesterSmith> Unlike D6xD6, which by nature of its central mechanic is limited to 20 skills or less per setting, D13 can have an open-ended number. I have a list of 25 at present, some with subskill specializations. More development is slated for that bit.

[21:12] <+LesterSmith> I’m making skill “packages” related to specific occupations, so that random occupation will determine what skills you’re best at in this incarnation. Or the GM may let you spend a pool of points to buy what you want.

[21:13] <+LesterSmith> That Attribute + Skill level mechanic is not an innovation, of course, but it works well with this die mechanic.

[21:16] <+LesterSmith> One sec while I check notes. We’ve been developing combat stats from what my original rough notes were.

[21:21] <+LesterSmith> So quick attacks do less damage, while later attacks do more.

[21:25] <+LesterSmith> Most weapons will have a lesser base damage than this, of course, and most characters will have a skill level lower than that max of 10.

[21:30] <+LesterSmith> A bestiary. Here’s another similarity to D6xD6. In D6xD6’s Game Host chapter, I give a system for making enemies at beast, minion, lieutenant, villain, and monster levels, with examples of each.

[21:31] <+LesterSmith> Then in example adventures, the enemies in that adventure are statted out. Same here.

[21:34] <+LesterSmith> Psychic powers use a unique system with a card deck. Combat can be tracked on a spirit board (“Ouija” is PB trademark). I’ve been using a poker deck to play-test psychic powers to this point but am adapting to a tarot deck, because you know, spirits and stuff.

[21:36] <+LesterSmith> I think that’s everything. Except mentioning the Kickstarter currently running. The premium personalized limited edition is almost gone (your name stamped in gold leaf on the cover). The other limited edition is half gone. We’re near a stretch goal where the book is expanded 8 pages (from 104 to 112). A second goal not far from that takes it to 120 pages.

[21:37] <+LesterSmith> I think that’s everything. Thanks for the chat. As always, you’re a good person to talk with.