Posted by saintnexan on September 14, 2017
Posted in: Q&A. Leave a comment

[19:34] <+BPIJonathan> I am Jonathan M. Thompson, I am the owner of the small press publisher Battlefield Press. We are the publishers of the upcoming Cold Cash War. 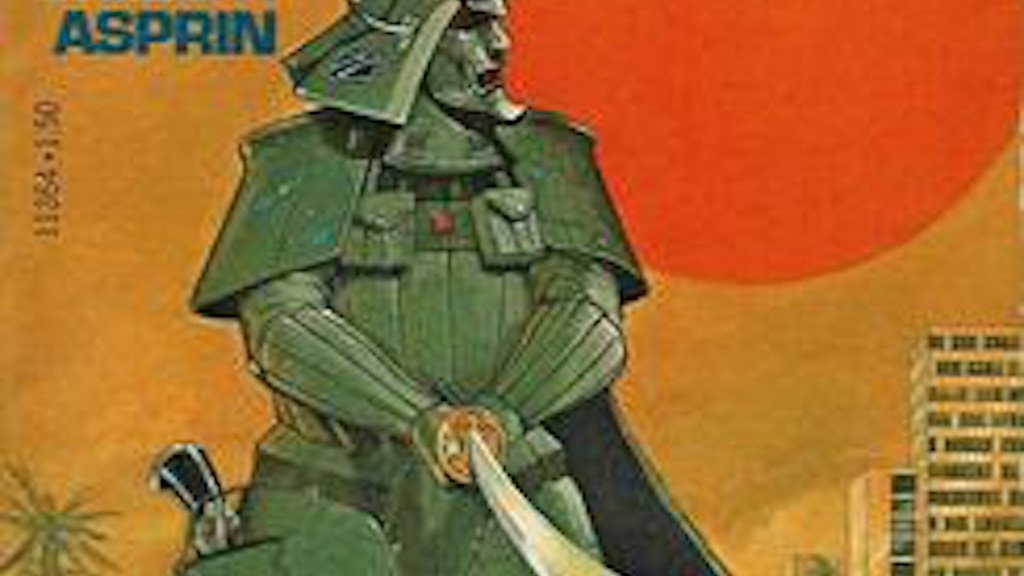 [19:36] <&Silverlion> I don’t remember reading those books, just the Myth ones, what is the setting about?

[19:38] <+BPIJonathan> Cold Cash War was Asprin’s first novel, published in 1977 (so 40 years ago). The book is about corporations trying to get more powerful than their counterparts, but they do it through literal warfare. They hire mercenaries and fight in third world countries to see who wins.

[19:39] <+BPIJonathan> They use a device called “kill suits” to determine enemy death, these suits will register your damage and quit working as appropriate.

[19:40] <+Hexeter> Ah yes! Didn’t they rip that off in that terrible Robot Jox movie a long time ago? I always thought that was a really cool idea. Gladiatorial type Combat in the Corporate World.

[19:41] <+BPIJonathan> The only thing I remember about that movie was Gary Graham was in it.

[19:43] <+BPIJonathan> In this setting you play a a government agent, mercenary hired by a corporation, an information broker or a corporate executive. Get involved in corporate espionage, assassination or even stomping the enemy. Be a part of Oil, Energy or even a Japanese corporation. If you dont want to be a corporate drone, then side up with one of the world governments.

[19:44] <+EggEmbry> You’re making this game available in two systems – Savage Worlds and the Cepheus System. Why did you pick those particular systems?

[19:45] <+BPIJonathan> Dan: I would describe it as near future, but based on a near future with a start date of 1977. We are keeping it as close to the novel as is possible (as also requested by the Estate)

[19:45] <+BPIJonathan> Egg: I love Savage Worlds and I thought it would make a great SW setting. We have done other settings for SW that were also licensed products, and so we have a lot of experience with the system.

[19:47] <+BPIJonathan> As for the Cepheus game engine, that was picked when my co-author talked me into us releasing a Traveller version of the setting, as he thought it was a good match (old school setting plus old school game) and we only have one other product released in that system, so we thought that a second one would be nice.

[19:47] <+BPIJonathan> As Cepheus is a derived version of the Open Traveller (1st Edition) that Mongoose released.

[19:53] <+Apparition> That’s good to know, especially since Cepheus Engine doesn’t have a print edition just yet.

[19:54] <+Hexeter> So the Cepheus Engine book will be a Complete Game then? No need to own a Core Rules Set or anything like that?

[19:55] <+Hexeter> Can you tell us about the ever popular ‘Stretch Goals’ that might be attainable?

[19:57] <+EggEmbry> I did not realize that the Cepheus version of this would have everything needed (game and setting). That’s really cool! 🙂

[19:57] <+EggEmbry> You mentioned working with Robert Asprin’s estate to secure this license, how did you go about reaching them?

[19:57] <+BPIJonathan> Right now we are negotiating with some other game authors about doing a series of “one sheet” style adventures for Cold Cash War, these adventures will be stated for both editions of the game (as individual releases).

[19:58] <+BPIJonathan> So if you are a SW backer you wont get an adventure with Cepheus Engine stats.

[19:59] <+BPIJonathan> My mother taught me several useful skills, the best one for me has been how to network.

[20:02] <+BPIJonathan> I had a meeting last night that may net some more information about game systems and writers and such, but I have to hold it under my hat until we settle on an end.

[20:02] <+Apparition> BPIJonathan, should Cold Cash War do well, do you intend on working with Robert Asprin’s estate to adapt more of his works to RPGs?

[20:03] <+BPIJonathan> Apparition: Yes indeed. Still on my list to adapt are Myth Adventures and Phule’s Company.

[20:03] <+BPIJonathan> We were unable to secure the rights for those at this time, but its still something that is possible in the future. Cold Cash War was the first Asprin novel I read, so it holds a special place for me.

[20:04] <+BPIJonathan> Phule’s Company is a series of comic military science fiction novels by Robert Asprin, beginning with Phule’s Company and ending with Phule’s Errand.  The series takes place centuries in the future, where humans and other species have come together to form the Interplanetary Alliance, a federation government of numerous planets.

[20:05] <+BPIJonathan> The Alliance’s military includes not only the Space Legion, but also the Regular Army and Starfleet. The Space Legion is considered the lowest on the totem pole, and the laughingstock of the armed forces. Space Legion protocol has all persons using a pseudonym chosen upon enlistment, and commissions are purchased. It is a violation of Legion rules to release

[20:06] <+BPIJonathan> The stories all take place with members in the Space Legion.

[20:06] <+Apparition> Phule’s Company is one of my favorite science-fiction novel series.  It’s hilarious.

[20:10] <+BPIJonathan> They decide who they want to fight, they hire mercenaries and dispatch troops (that is unless someone turns the game deadly, which is what happens in the novel)

[20:11] <+BPIJonathan> So, as a game master you can decide you want the game to be deadly and that your characters can be the target of assassins

[20:14] <+BPIJonathan> computers, killsuits, ballistic firearms (but they have the ability to predict a kill rather than actual make a kill, kind of like the military uses today for war games)

[20:15] <+BPIJonathan> A lot of the things we have today, just described a bit differently

[20:16] <+BPIJonathan> Well maybe you dont see tanks driving down the road, but you get my meaning 😀

[20:18] <+BPIJonathan> Yes, the corporations field actual military units made up of mercenaries.

[20:22] <+EggEmbry> It’s post-1977, is the Communist bloc represented in the setting? Are they another side in the conflict?

[20:24] <+BPIJonathan> The Communist Block is represented, but only as a spot on the map call “C-Bloc” you do not hear anything out of them during the events of the novel. So, no one has any idea of what they are up to, until the very end. I would like to do a future book on the C-Block, and the different corporations in individual books as well.

[20:25] <+EggEmbry> That would be interesting. 🙂 Are the corporations more powerful than the governments?

[20:26] <+BPIJonathan> The US Government tries to curtail the corporations in the novel, after they start going deadly, and they have no luck.

[20:32] <+BPIJonathan> We got permission from Wayne Barlowe to use the art from the cover in the KS, and if we can track down a digital version of the same piece, we will be using it for our cover. If we can not, we have an artist that is also a fan of the novel, plus a fan of Mr. Barlowe’s and will do a piece that give homage to the original cover.

[20:34] <+BPIJonathan> The action can take place doing anything. Corporate Espionage, actually battlefield work, even doing country vs country stuff. There is one character in the novel that is not a merc or a corporate, he runs an information house.. basically a clearing house for world wide information. He employs people to spy for him, so its like a civilian version of the CIA

[20:34] <+BPIJonathan> There is not a reason that the PCs could not work for an agency like that.

[20:35] <+BPIJonathan> We would be happy to do one as a possible stretch goal

[20:41] <+BPIJonathan> It is pretty high action, depending on the level you want to play it at, its possible for characters to be killed.

[20:43] <+BPIJonathan> In one you dont really have to worry about your character being killed, the worst that will happen is that they are captured and released (there will still be consequences of their actions), the other version has a possible death sentence for your actions.

[20:44] <+HDP_Dave> How  viable independent players, war profiteers, gun runners, the type that aren’t loyal to any one side as PCs?

[20:45] <+BPIJonathan> It would be like running a party of Chaotic Neutral Rogues in D&D, possible.. even fun, but maybe not your best option for long term play…unless you figure out how they work with your group.

[20:47] <~Dan> What mechanism is in place to ensure that corps abide by the outcomes of the war games?

[20:49] <+BPIJonathan> Its not good for them to violate them without negotiations. If a merc violates his corporation rules he is sanctioned. It is an area left to the GM, we will give the tools but once you buy the game its your game to run as you wish.

[20:49] <+BPIJonathan> Corporations in this case, are a lot like countries.

[20:53] <+BPIJonathan> I see it as a start of a game line, the core book plus a few books detailing the major players.

[20:54] <+BPIJonathan> For sure I would put more out beyond the core if the demand exists.

[20:57] <+BPIJonathan> For me, running the game, the ideal situation would be that everyone worked for (in some way) the same corporation, leaving other corporations as the bad guys. But there is also the mysterious C-Bloc to worry about (but most corporations dont because they dont really seem them as a threat since its been years since they came from behind their curtain)

[21:01] <~Dan> Are the corporations the equivalent of megacorps, or are they just like well-funded modern corps?

[21:02] <+BPIJonathan> They are megacorps, with names like Communications, Aerospace, Oil.

[21:05] <+BPIJonathan> Yes…they are all conglomeration companies.

[21:07] <+BPIJonathan> They are in competition, to be #1. If they damage a rival, that rivals stock prices drop

[21:08] <+BPIJonathan> They are still competing for resources, even if they are not producing the same thing.

[21:12] <+BPIJonathan> There was nothing mentioned in the novel proper, but I dont see any reason why they couldnt do that. Its going to be something that we will address in the game.

[21:14] <+BPIJonathan> Everything is mundane in that way. There are no psychics or supernatural elements in the story.

[21:18] <+BPIJonathan> Other than that I am excited about this, and its a setting that has been near to me. Asprin, Heinlein, Asimov, Foster and Vance were the first fiction that I ever read. My first couple of Sci Fi books were Asprin’s Cold Cash War and Heinlein’s Starship Troopers. I am a huge fan of the classics, and I appreciate the support you have given by being here tonight

[21:20] <+BPIJonathan> Thank you for having me on Dan. I always enjoy being here. I will hang around awhile in case someone needs something answered that didnt get asked or just to chat.