[19:31] <+JamesVail> Hails! I’m James Vail, the illustrator/writer/designer of Xas Irkalla, a survival horror game set in a world of nightmares that are spawned by the subconscious of dead psychics

[19:33] <+JamesVail> You play as the last survivor from your universe, and you are brought into Irkalla, the land of dust and ash, a graveyard of dead worlds that have collided into it, forming labyrinths of other dimensions.

[19:34] <+JamesVail> You have to escape from one of those labyrinths, and then survive the desolate land outside.

[19:37] <+JamesVail> I’ve been working on this game for the past 4 years, playtesting for the last 2, created a system for it called the Strain system, which is all about challenging the players. I’m all about the macabre and very dark aspects of art, and really enjoy challenging, unforgiving games, so I made Xas Irkalla to reflect all of that. 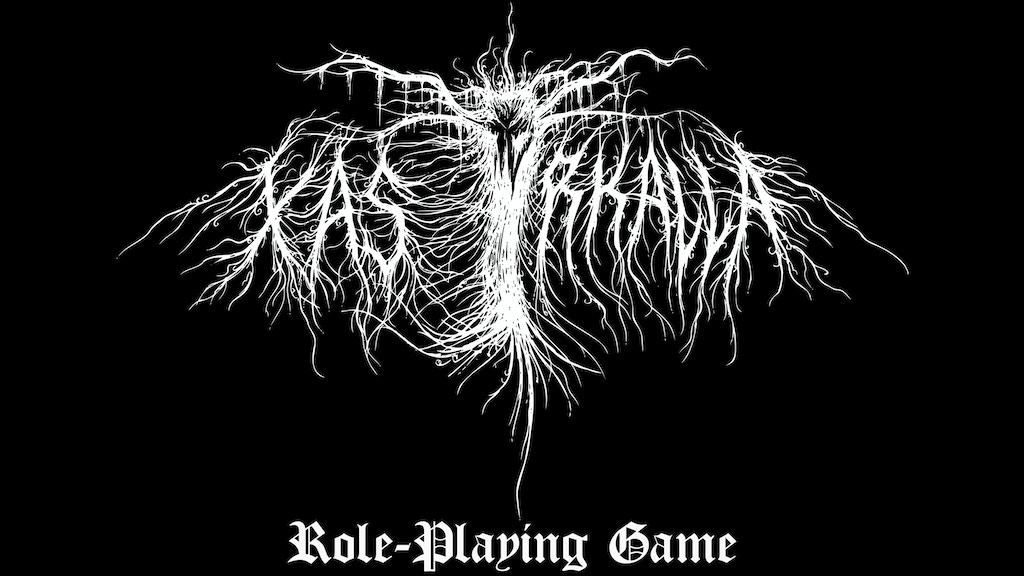 [19:38] <+JamesVail> Oh, actually I probably should have mentioned it’s on Kickstarter with 5 days left, haha

[19:40] <+JamesVail> So the high concept really came from this desire to have players create characters from any world they want, and have them work together without having ever known each other.

[19:41] <+GenoFoxx> So if I read this right you could almost view this as how Galactus views the marvel universe?

[19:43] <+JamesVail> I would say it’s multigenre in terms of character backstory, but the player characters all wake up naked at the start of the game, so even a high-tech character would not have any advantage unless they had implants (which is possible with the character creation)

[19:45] <+JamesVail> Genofoxx, I’m sorry for not really being familiar with that, I’m kind of an outsider when it comes to superheroes. The best answer I can give is that the universe is based on ancient mesopotamian mythology and left hand path philosophy, drawing from ancient religions of the middle east

[19:46] <~Dan> But seriously: seems like a pretty tall order. How can the PCs manage to survive under those circumstances?

[19:48] <+JamesVail> Dan, I hope they are afraid haha   it won’t be easy, the game is meant to be hardcore, but the core mechanics are designed to be fair, allowing the players to choose how many dice to roll (increasing their chance of success), but at the risk of gaining more stress for rolling more dice (character’s have to roll higher than their stress scores to succeed)

[19:49] <~Dan> Interesting… Are the PCs meant to be particularly tough starting out?

[19:49] <+JamesVail> so it’s not a difficulty based on poor odds, and it’s not arbitrated by the GM. the mechanics are player-facing. you can see, on your character sheet, what you need to roll higher than

[19:50] <+GenoFoxx> ((Galactus was the last survivor of the previous universe and is gifted/cursed with having the power to eat planets to continue surviving in the current marvel universe as part of the order of the new universe))

[19:51] <~Dan> That being the case, how does the GM present particularly tough situations?

[19:51] <+JamesVail> not at all, the PCs start with 5 skills, randomly generated from their background (somewhat of a narrative system). those skills are rank 1, and the core mechanic is d10 + skill rank, requiring 10 or higher for complete success, and higher than stress score for partial success

[19:54] <+JamesVail> The GM actually just presents situations, and sometimes the player characters are well-enough to overcome it, and sometimes they aren’t. it’s meant to have a difficulty against the system itself, like a board game. 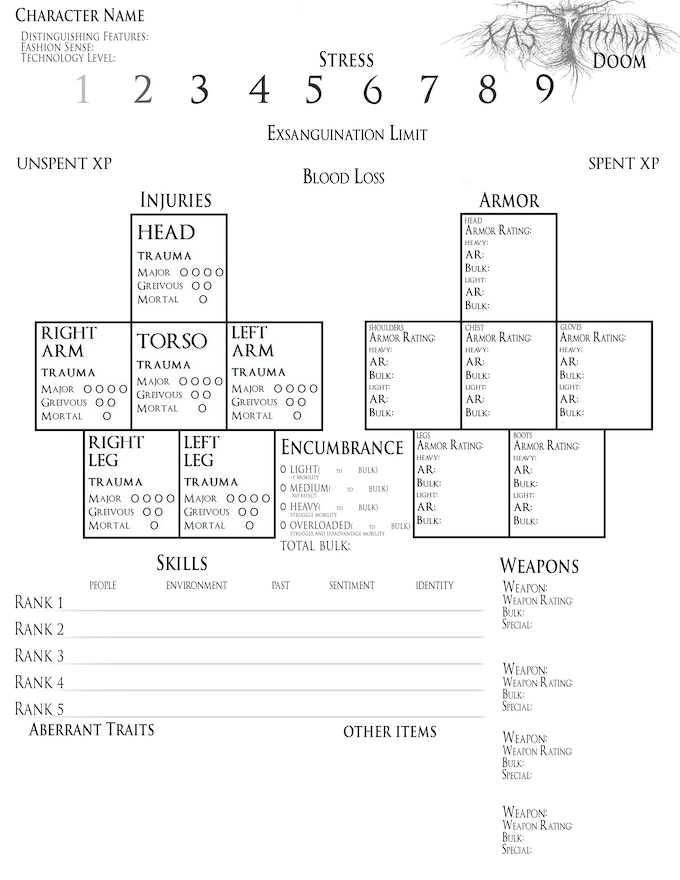 [19:56] <~Dan> Would you say the game is akin to Powered by the Apocalypse in that respect?

[19:56] <+JamesVail> it is certainly inspired by pbta, with the fail/partial/success concept

[19:57] <+JamesVail> but I wouldn’t call it pbta, since moves are not part of this, and it is closer to fate in terms of its skill system

[19:57] <~Dan> The injuries and armor look pretty detailed. How involved is the combat system?

[20:01] <+JamesVail> the combat system is actually modular, so you don’t have to bother yourself with it if you don’t want to.. the injuries/armor/blood loss may seem complex, but it’s actually pretty simple. every 10 points of damage received is a different degree of injury (10-19 is major injury, 20-21 is grievous, etc.) and once those fill up, an injury becomes more severe.

[20:02] <+JamesVail> blood loss is 1 point for every 10 points of damage. if that reaches the exsanguination limit, the character starts bleeding out. and armor reduces incoming damage, weighing a certain amount.

[20:05] <+JamesVail> so Irkalla is largely primitive, with a few seats of civilization that range from archaic to classical. but because of the intersecting dimensions, there is also some high-tech that can be found in the other-worldly labyrinths

[20:09] <~Dan> And you mentioned that some PCs can start the game with cybernetics?

[20:13] <+JamesVail> correct, those are the Aberrant Traits, and it’s encouraged to not be human, since you are technically a character that’s been dreamt up by a psychic demigod

[20:17] <+JamesVail> yeah, Irkalla is not a pleasant place, so these psychics (called Architects) perpetually dream of other dimensions (which actually exist). the problem is, the Architects can’t wake up from those dreams, else they will explode with chaos energy in a sort of death cataclysm

[20:20] <+JamesVail> yeah, the Architects are occultists in Irkalla that unlocked the secrets of the Qliphoth, eleven gateways to the infinite chaos beyond the cosmos. once they enter that beyond, they cannot wake, so they manipulate the people of Irkalla through psychic illusions to tend their meditative bodies

[20:24] <+JamesVail> so that kind of brings up a point about the morality of the setting. Cormac McCarthy’s The Road was a great inspiration to me, and the morality of people trying to survive in such a horrible place really becomes grey… just like the ash-laden world. grey. the whole setting is really bleak, and even though it would seem that the architects are “evil”, it’s…

[20:25] <+JamesVail> ..not that simple. the people of irkalla have terrible lives. the wastelands are horrific. cannibalism is commonplace for the lack of food. worms and insects being the other diet, though those are delicacies.

[20:27] <+JamesVail> so most architects grant their servants illusions of paradise, grant them water, safety… they simply require fealty. which is not much to ask for, the people end up worshipping the architects like gods.

[20:35] <+JamesVail> well, it is meant to be a campaign setting, so the characters start off by having to escape the labyrinth, then face the wastelands and yes, struggle to survive, build shelter, find water, and may even form a settlement with other survivors. from there, they can venture further into the world and learn more about the truth of their situation…

[20:37] <~Dan> With so many freaks around, seems like it would be difficult to be a true cannibal (eating one’s own species). 😀

[20:38] <+JamesVail> Yes, the endgame involves finding artifacts to unlock the secrets of the Qliphoth, entering other dimensions to gain psychic powers, and ultimately the characters can become Architects themselves, if they wish

[20:42] <+JamesVail> it could be that by becoming an architect, you are able to create another dimension of your choice, which would presumably be of your species

[20:43] <+JamesVail> or it could also be one of the other party member’s species, and then.. well, if that character/architect dies, one of those creations would come into the world

[20:44] <+JamesVail> or, you could forego that whole notion and try to create a hybrid species with one of the inhabitants of Irkalla. either way, you have a story about the survival of a species. which is the story of Xas Irkalla, at its core.

[20:47] <+JamesVail> there are very few creatures aside from humans and aberrant breeds. there are beasts of burden that were actually aberrant humanoids at one point. most of the creatures that exist in Irkalla are the spawn of nightmares.

[20:50] <+JamesVail> during the night, the more beastlike creatures are everywhere. and labyrinths are filled with all sorts of demonic horrors.

[20:52] <+JamesVail> the dead trees become grasping limbs, the ground opens up with strange orifices, the stones turn to giant heads

[20:53] <+JamesVail> specifically, in darkness.. a lightsource dispels the surreality

[20:54] <+JamesVail> you should probably try to huddle by a campfire, since the nights are also frigid

[20:57] <+JamesVail> there is a creature generator actually. the only creatures that I have detailed are the ones found in the included adventures

[20:58] <+JamesVail> (i’ll re-post that answer: Irkalla is largely primitive, with a few seats of civilization that range from archaic to classical. but because of the intersecting dimensions, there is also some high-tech that can be found in the other-worldly labyrinths)

[21:01] <~Dan> With the PCs starting out totally unequipped in a literal living Hell, how often do you get a TPK right out of the gate?

[21:04] <+JamesVail> hahaha well, I don’t have the exact statistics of that… but I’ve never actually had a TPK. There’s always been at least one survivor.

[21:05] <+JamesVail> But on that note, character creation is very fast, taking less than 5 minutes. So even if your character dies, you can get right back in.

[21:07] <+JamesVail> Yeah, I mean I knew that it was going to be somewhat high lethality, so I wanted to make sure that characters can be created quickly, and that there is continuity between the character deaths

[21:10] <+JamesVail> so players keep their XP, and any unlocked psychic powers, since the architect that created the character in the first place is in the character’s subconscious. the next character is spawned into the world at the nearest “intersection” of worlds, and is from the subconscious of the dead character.

[21:12] <+JamesVail> one thing I’d like to add about the loss of a character is that it is always painful to see a character go, since the skills are always very unique to a character, based on the actions they took in the game

[21:13] <+JamesVail> i mentioned before that your character’s background words are your character’s rank 1 skills. those are pretty broad, but they are only rank 1. (everyone also has a rank 0 skill called struggle, which can be used for any action)

[21:16] <+JamesVail> thanks! it happened way faster than I thought it would have. It’s not exactly something that’s in the standard forray of RPGs haha

[21:20] <+JamesVail> Blore, it is indeed inspired by the atmosphere, aesthetics, and lyrics of black metal

[21:21] <+Blore> I wonder what Black Metal bands you recommend especially for this game?

[21:21] <+Blore> Or I wonder what Black Metal band inspired you making this game?

[21:23] <+JamesVail> there are a few in particular that really inspired it. Watain, Dissection, Behexen were great lyrical inspirations for the cosmology

[21:23] <+JamesVail> but also Melechesh, for being a “Mesopotamian Metal” band

[21:25] <~Dan> (Quick aside: You’re welcome to hang out with us as long as you like post-Q&A and continue to field questions if you like, JamesVail.)

[21:27] <+JamesVail> it inspired a very short “setting vignette” that might not exactly be appropriate for this chat, but involves a ritualistic sacrifice

[21:28] <+Blore> But do you have actual black metal music that fits the game though?

[21:28] <+JamesVail> I have posted several of those setting vignette’s on the Xas Irkalla facebook page

[21:31] <+Blore> JamesVail I also wonder if there’s any supernatural beings in this game like Vampires, Werewolves, Demons, etc

[21:32] <+JamesVail> and yes, I’ve been listening to Dungeon Synth for a long time now, since before I knew it was called Dungeon Synth haha.. I hate to admit that I like his music (since he’s a racist and a murderer) but I grew up listening to Burzum

[21:34] <+JamesVail> it’s not really the gothic type of horror, so you won’t find supernatural creatures of that type, but players can make characters of their own design from their own universe