[19:39] <+Liam_Raids> Raids is a storytelling RPG with the main focus on stories rather than being too rules heavy.

[19:40] <+Liam_Raids> This makes it a nice entry level game for younger players or gamers who are not as familiar with tabletop RPGs.

[19:41] <+Liam_Raids> But the rules are able to add more depth and challenge to the game to allow something for seasoned gamers or players who want to kick it up a notch. 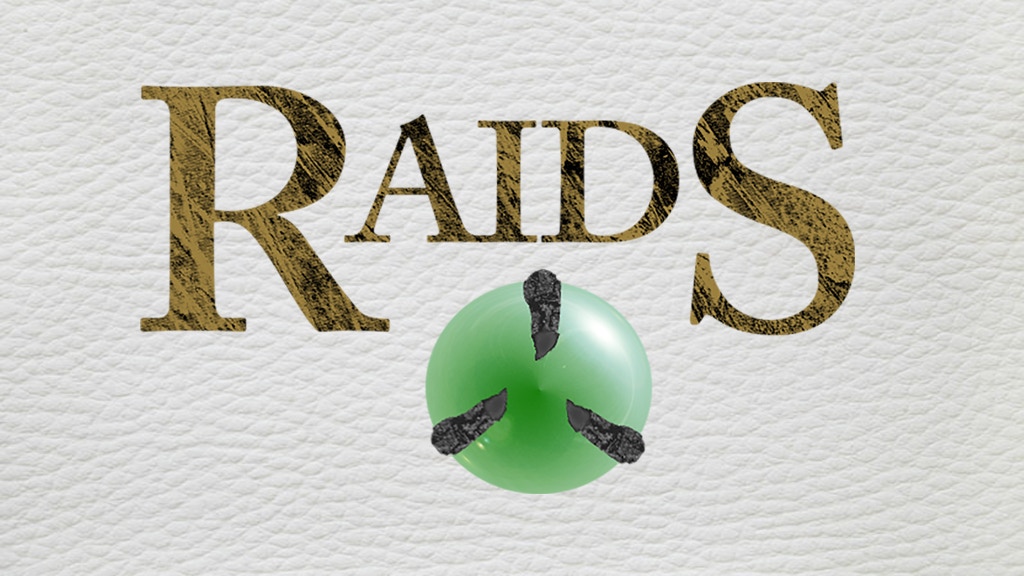 [19:45] <+Liam_Raids> The rulebook set for release comes with a fantasy setting- a newly forged world of warring gods. However the rules are designed to fit any genre, and I plan to create more settings in the future, so that everyone at the table can play as whatever style character they want without changing game system.

[19:48] <+Liam_Raids> Dark fantasy, with lower stats than some other games to add some real gravity to all player choices.

[19:49] <~Dan> Hmm. Dark fantasy would seem to be “harder”, for lack of a better term, than other forms of fantasy. Is that at odds at all with the introductory nature of the game?

[19:51] <+Liam_Raids> You don’t fail more often (unless your dice are against you), but lower HP totals make combat a little more tactical than blindly attacking. You’ll have to pick your moments and plan against tougher foes.

[19:53] <+Liam_Raids> The main reason for the dark fantasy setting is the main evil force- shadows. The dark god uses shadows to corrupt as he cannot create for himself. Because of this the tone is darker, but the god of light is a symbol of hope and helps make the setting a little brighter.

[19:53] <+Liam_Raids> It all depends on your gaming group, and the tone you feel is best for the players at your table.

[19:58] <+Liam_Raids> The main humanoid races available to play as are: humans- the first beings given the spark of life from the Great Flame. Hillsmen- the forgotten humans who fled to the mountains when their homes were destroyed, and no god answered their call. And fey: small wooden creatures born from trees, where magic has affected them.

[19:58] <+Liam_Raids> But there are conversion notes to make any other creature in the book playable, or races from other games and settings.

[20:01] <+Liam_Raids> Hillsmen know the minerals that they live amongst, have low-light vision, are sturdier than other races due to harsh conditions, but are succeptible to sunlight.

[20:03] <+Liam_Raids> Yes- given time in the world, they may evolve into more common Dwarves. But they are very pale and often hairless.

[20:04] <~Dan> You said the evil god can only corrupt. Does that mean that all monsters are warped versions of good creatures?

[20:06] <+Liam_Raids> There are a few creatures who have chosen the path themselves, but they have gained power in other ways that has corrupted them. But yes, most creatures are shadow-touched and warped versions of others.

[20:08] <+Liam_Raids> Vampires do kind of exist, in that they are shadow-touched creatures with hunger. Their corruption gives them strength, but they need to feed off of untainted creatures.

[20:09] <+BLore> And I don’t like games that not only force you into “hero” roles but also what defines as “Good” and the “Light” are never questioned

[20:10] <+Liam_Raids> That’s fair enough. The Great Flame and Shadow aren’t the only gods in the world, and you don’t even need to use that setting.

[20:10] <~Dan> For monsters, did you go with standard fantasy creatures or your own creations?

[20:12] <+Liam_Raids> I tried to go off on my own tangents for creatures as much as possible. I took inspiration from folk stories and mythology, and tried to make sure that every creature made sense in the world. But of course, some standard creatures make their appearance, and you can add any you think I’ve missed for your stories.

[20:13] <+BLore> Well another thing too though…I’m looking for a Vampire game that are not “cursed beings” but rather undead demigods which “monstrosity” is defined by visage (like red eyes, fangs, blood hunger and undead etc) not by VtM’s/VtR’s concept of “Damnation” and the “Beast”

[20:14] <+BLore> Since I’m tired of Vampire settings where they’re “suffering” by their own monstrosity and also I don’t like morality mechanics either.

[20:15] <+Liam_Raids> Raids is a framework of rules that is able to fit to any setting. It sounds like you have a strong idea of the world you want to play in, which is brilliant. The accessible rules can help add stucture to your storytelling, and balance it for all players to have fun.

[20:18] <+BLore> Liam_Raids If the Great Fire and Shadow aren’t the only Gods then what about creatures/beings who originated from those other deities?

[20:18] <+Liam_Raids> I believe there may be some of the rough early designs posted (I’ll check) but I’m still going through the final look. I can always talk you through the sheet?

[20:22] <+Liam_Raids> The other deities were given power at first by different creatures praying to things (such as the sea of the forest) that provide for them. As more people pray to them, they grow in strength and forge elementals. This is where the fey come from.

[20:26] <+Liam_Raids> On your sheet you have, Resolve: your strength of body and mind, Awareness: social and situational, Intelligence: magic and intellect, Dexterity: finesse and agility, Strength: physical presence

[20:27] <+Liam_Raids> You also have your equipment, and any skills which you are trained in.

[20:29] <+Liam_Raids> Most gods are elemental yes- the world is still fresh as worlds go, and most of the forces are still very primal. The forces of nature haven’t fully refined themselves into personalities yet, and the people interpret their actions.

[20:33] <+Liam_Raids> The game’s core system is a d20 system. You tell stories and adventure, and when you come across an obstacle, you roll a d20, add your stat and any relevant skills. If you are playing with a GM, they would set a challenge level for success or failure. If not, another party member would roll to set a level.

[20:35] <+Liam_Raids> Combat is a bit more back and forth as you roll to attack and actively block incoming attacks. Your Dodge/ Parry will help you feel more in control in enemy turns and is the other reason for lower HP, as you want tension in fights not boredom.

[20:37] <+Liam_Raids> They are yes. Most weapons will deal d6 damage, and it is your skill with them that increases the damage. As you use the weapon more you will gain more skill points with that weapon. However, if you’re not trained, you can still pick up and use any weapon or armour.

[20:41] <+Liam_Raids> Yes, your base stats do factor in as it aids your ability to inflict damage. It all depends on the type of weapon and how you choose to attack with it. Slashing is more Dexterity based than strength, but bludgeoning and impaling will use your Strength.

[20:44] <+Liam_Raids> It is yes. The tougher the armour, the more damage reduction, but you may have a lessened dodge ability. It’s a trade off, but it may help you if you throw yourself into combat.

[20:47] <~Dan> Sounds like a pretty solid core for your game. I’m not sure I see anything particularly newbie-worthy about it, though. Am I missing something?

[20:49] <~Dan> I mean, it doesn’t sound especially complex, mind you. It just doesn’t strike me as being any more introductory than, say, Pendragon.

[20:51] <~Dan> I should also stipulate that I really like what I’m hearing about the game so far.

[20:51] <+Liam_Raids> The rules are quite modular, you can add and take away as much as you want, to make it a storytelling game first. The biggest example is magic: there is a comprehensive list of spells and progression, but for newer players it’s a lot more open. They take the magic skill, say what they want to try and achieve (roll to see if they miscast or succeed) and do it.

[20:52] <+Liam_Raids> But you have to make sure they’re not too overpowered and everyone still has fun. When they start to get that way, bump them up to the magic tree system.

[20:56] <+Liam_Raids> Other RPGs that have influenced Raids are D&D (all versions), Fate, The Age System, Doctor Who Roleplaying Game, Mutants and Masterminds… Lots! I’ve played a lot of systems, but hate swapping for campaigns. I wanted to create a game for all genres that didn’t need to be houseruled, and was balanced. The end goal is a Ready Player One style Oasis on a table.

[20:58] <+Liam_Raids> When picking magic you can choose to specialise in an element, or to stay neutral. Elemental mastery gives you perks, but limits you against some foes. From there as you hone your skills you unlock bigger attacks and utility powers, but since magic is fickle, it can blow up in your face.

[20:58] <~Dan> How powerful does magic get? What sorts of things can it accomplish on the high end?

[21:02] <+Liam_Raids> At the high end, you can create elementals, forge weapons, armour and barriers, and become immune to the effects of the element. You may attract the attentions of followers, or the gods. But every time you use it, you risk losing your connection to it, or damaging yourself and your allies on the roll of a natural 1.

[21:06] <+Liam_Raids> Somewhere in the region of 100 creatures and races, including shadow-touched versions

[21:08] <+Liam_Raids> It’s a world I’ve been working on for about 12 years now, so I’ve had some time to think on it. But these do include the everyday creatures of the world too, to help players fully immerse themselves.

[21:13] <+Liam_Raids> I do indeed. I’ve been working on a lot of ideas simultaneously, to ensure balancing and minimal erratas, but the one I’m most excited about is inspired by Super Sentai/ Power Rangers/ Kamen Rider. Martial arts, colourful costumes, giant robots and monsters. I’ve had a lot of fun working on that setting.

[21:16] <+Liam_Raids> There’s something about Saturday morning tv and the epic action stories, it’s something I’ve always wanted to play out in an RPG.

[21:17] <~Dan> GenoFoxx: [21:13] <+Liam_Raids> I do indeed. I’ve been working on a lot of ideas simultaneously, to ensure balancing and minimal erratas, but the one I’m most excited about is inspired by Super Sentai/ Power Rangers/ Kamen Rider. Martial arts, colourful costumes, giant robots and monsters. I’ve had a lot of fun working on that setting.

[21:18] <+GenoFoxx> so did you want to be Blackstar or Thundarr the barbarian?

[21:20] <+Liam_Raids> So yes, a mecha and monsters setting is definitely on the horizon to open up a whole host of sci-fi and fantasy crossovers.

[21:22] <+GenoFoxx> I’d don’t know with Thundarr you’re dealing with a post-apoc/recovery setting, while with Blackstar you know that eventually he can go home to an Earth that has modern comforts and has FTL travel

[21:23] <+GenoFoxx> plus the Sunsword doesn’t shoot energy blasts or allow you to fly

[21:24] <+Liam_Raids> Well, the one thing I should definitely mention is Raids has a single player mode. There are times that real lives and schedules get in the way, and you want to have an adventure. Raids can support that and gives you a chance to play.

[21:26] <+Liam_Raids> There will be a hyperlinked PDF to play like an old read and roll story, or a bookmarked physical copy.

[21:26] <+Liam_Raids> And I hope to incorporate a digital version with a dice roller into the website in the future.

[21:29] <+Liam_Raids> Well, the current Kickstarter unfortunately doesn’t look like it will succeed- the cost of producing the dice has driven the price too high. I will be editing the campaign without the dice (adding some new rewards in place) and relaunching soon.

[21:29] <+Liam_Raids> But failing that, I will digitally release the game, and offer it through print on demand for physical copies.