[19:34] <+BPIJonathan> Hello all and welcome to the Q&A tonight. I am Jonathan M. Thompson, co-author and publisher of Gaslight Victorian Fantasy, now in its third edition for Savage Worlds.

[19:36] <+BPIJonathan> Gaslight Victorian Fantasy is a Victorian world, but not as history tells us it was, but as the literature implies that it was. Believe that the literature from the period were more than just stories, but instead firsthand accounts of the events that happened in the world.

[19:36] <+BPIJonathan> Imagine a world populated by the lost boys of JM Barrie, the Beast Men of Dr. Moreau even tales of an immortal vampire named Dracula. Included in these are organizations bent of determining what is best for humanity, and they have launched a secret war against others so that only one will prevail. 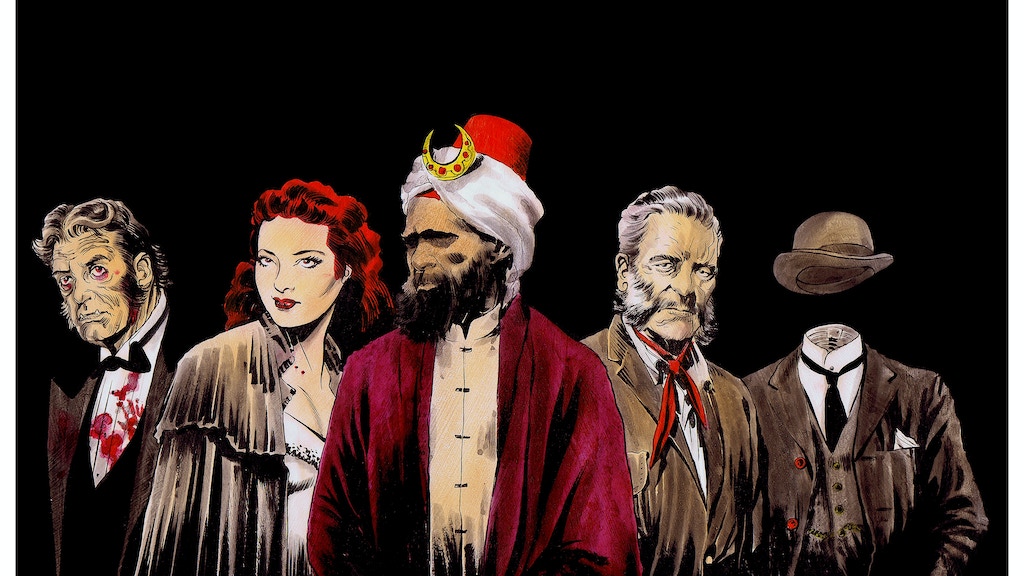 [19:38] <+BPIJonathan> No, its Victorian Fantasy. There is no reason why you couldnt add those elements yourself. There are characters that can invent stuff..but overall its not steampunk.

[19:39] <~Dan> Do characters from Victorian sci-fi like Captain Nemo and Robur the Conqueror exist?

[19:40] <+BPIJonathan> Yes. We are doing a series of what we are calling the Dramatis Persona, which contain writeups of characters from various places in the literature, and other areas.

[19:40] <+BPIJonathan> This way they can be added to your campaign if you choose.

[19:43] <+BPIJonathan> Anything, you can be an investigator, a priest, a wizard, an explorer, a military person (officer or enlisted). Also you can be other than human, from wildlings (immortal children) to Vampires. Included in this are Pixies, Ghosts, Beast Men, Ratlings and Werewolves.

[19:46] <+BPIJonathan> They are kinda typical. They study, learn spells, cast them, they dont really make magic items because magic items, while they exist, are generally named items and are a little rarer than what you would find in D&D. So more Dresden/Houdini and less Elminster.

[19:48] <+BPIJonathan> Magic is also limited in what it can do as well, so nothing huge and flashy most of the time, it can be but usually they try to keep it subtle. They are not robed wizards, you run around in suits or shirts or skirts, depending on what you are interested in.

[19:51] <+BPIJonathan> Vampires follow closely the model presented by Bram Stoker in the Dracula novel. They are not affected by holy symbols, water, and can walk around in Sunlight (however this does make them weaker).

[19:52] <+BPIJonathan> They still drink blood to survive, but they can not pass on Vamperism to others.

[19:52] <+BPIJonathan> The creation of Vampires is only something that Master Vampires can do, like Dracula.

[19:56] <+BPIJonathan> Initially they can see in darkness, have enhanced strength and constitution, and they have a form of limited immortality.

[20:01] <+BPIJonathan> Pixies hail from the realm of the fey. They originally were sent to this side of the veil from Avalon to be the eyes and ears of King Oberon. They have varying dispositions, and quite a few of them are loving the freedom they have with being away from Avalon.

[20:09] <+BPIJonathan> Ghosts are humans that didnt want to cross over, have unfinished business or are trapped by magic of some kind. They are charismatic, they have limited ability to move things, they are telepathic (but only to the languages they know), they can see in the dark

[20:09] <+BPIJonathan> and they have some limited damage resistance.

[20:11] <+BPIJonathan> Yes. Beast men were rescued from their creator Dr. Moreau, from an island in the South Pacific. There are several different types of beast men, but the more active are Bat, Bear, Cat and Dog.

[20:15] <+BPIJonathan> Ratlings are a rat people that mostly live underground. They are the sworn enemies of the Wildling, who they believe are encroaching on their turf.

[20:17] <+BPIJonathan> It is a pretty flexible ruleset and was easy to teach others for demos.

[20:21] <+BPIJonathan> No, not really, the setting remains constant. The ruleset changes only really effects the way its played, Pathfinder plays like Pathfinder, 5e plays like 5e, and Savage Worlds plays like Savage Worlds. We did what we could to make the transition from one version to another as easy as possible.

[20:23] <+BPIJonathan> The setting is not about the rules, its about the world. We give you the tools to make it your own.

[20:24] <&Silverlion> So is there a list of societies/secret orders? Vying for power or is it along species lines?

[20:26] <+BPIJonathan> There is a list, and its not among species lines. Any species generally speaking can belong to any organization. There are a couple that are limited in their membership.

[20:29] <+BPIJonathan> Depends on the country, also I guess it would depend on if they could pass for human. For example, the United States gave Beast Men suffrage before Women. Beast Men often enlist in the military of countries and gain citizenship that way, and in some places they are treated like second class citizens.

[20:31] <+BPIJonathan> Typically they are not well liked or thought of. The Van Helsing Institute exists to hunt down the supernatural. They survive because they can blend.

[20:32] <+BPIJonathan> Stephen is the co-author of Gaslight Victorian Fantasy

[20:32] <+BPIJonathan> They dont need too since they can pretty much do anything everyone else can do. Why risk exposure, when they can go to the beach just like everyone else 😀

[20:36] <+GaslightStephen> Over the course of several playtest and mini campaigns, I did establish a few classic bad guys. From Dr. Fu Manchu to Captain Nemo.

[20:38] <+BPIJonathan> However, generally speaking…the bad guys can be who you want them to be..from the above mentioned to another organization. I default to organizations like The Knights of the Round Table (which is a group of decedents, or so they claim)

[20:39] <+BPIJonathan> They want nothing more than to get their hands on Excalibur and use it to be masters of the world.

[20:39] <+GaslightStephen> Which is even more interesting considering I played them as a fairly neutral. The Red Headed League was a major bad group in my games.

[20:41] <+GaslightStephen> One thing I tried hard to do is make it so that any group could be be viewed as good or bad, depending on how you wanted your world to be.

[20:46] <~Dan> I “see” the Invisible Man on your KS page… Does the game allow for unique individuals like him?

[20:46] <+BPIJonathan> The formula for invisibility was lost after his use.

[20:47] <+GaslightStephen> But, using the SW rule system, it should not be too hard to add something like that to your game. However, the Invisible Formula is not in the game.

[20:48] <+BPIJonathan> Its something that would have to be added from another Savage setting, provided you wanted to go that route. Your game, your rules as we say.

[20:51] <+BPIJonathan> He would be a Legendary character in Savage Worlds, so yes…there is a possibility of you making your character unique.

[20:51] <+BPIJonathan> The whole way the game is designed is that two characters can hold the same job, be the same race, but have elements that are not alike at all.

[20:52] <&Silverlion> I imagine you could build the powers using the Superspower companion and carry it over.

[20:53] <+BPIJonathan> There is no reason you couldnt technically.

[20:53] <~Dan> Yeah, if you were wanting the League of Extraordinary Gentlemen.

[20:53] <+GaslightStephen> I contemplated doing something like that for convention games.

[20:55] <+BPIJonathan> The “cover” characters will be written up in the Dramatis Persona files we will be releasing.

[20:56] <+GaslightStephen> I also have a couple of adventures that we can release. I am also working on some things that even Jonathan doesn’t know about yet.

[20:57] <+BPIJonathan> We have a couple of books expanding material we have detailed in the core, like a book detailing a lot of places Prof. Challenger has either been or has heard about.

[20:59] <+BPIJonathan> I also have been working on an expansion that will take the world to our future. Not sure if I am going to release it yet, but its been kind of fun to work on because it allows me to map out events that I want to happen. Im not really sure how far forward we are going to take it, but having a map helps.

[21:00] <+BPIJonathan> It will include a limited one. Its one of the areas that are still incomplete.

[21:00] <+GaslightStephen> It is also one of the toughest sections to write.

[21:01] <+BPIJonathan> We have to decide which creatures to put in there, and which ones can wait for an expansion, along with other things.

[21:02] <+BPIJonathan> There is also a limited bestiary in the SWD Core book, so there wont be a shortage of creatures to use.

[21:02] <+GaslightStephen> I will say that one of the most fun parts of doing a bestiary is coming up with the scientific names for the creatures.

[21:09] <~Dan> You mentioned that there are airships in the setting. Are there any other anachronisms?

[21:09] <+GaslightStephen> I cannot remember a lot of the ones I did because, quite honestly, I have had a few strokes since I did the writing and I don’t seem to remember them.

[21:12] <+GaslightStephen> Let me think, I know personally I have used clockwork robots, Babbage Engines, and some others.

[21:12] <+BPIJonathan> Also technically the airship is within or period. The first one was built in 1899

[21:14] <+BPIJonathan> (I cant seem to spell anything correctly tonight)

[21:15] <+BPIJonathan> I have used Babbage Engines, clockwork robots and other things as well.

[21:17] <+GaslightStephen> Not having been here for the whole thing, I want to say that it is always exciting to meet up with folks who are interested in the game. They share the exciting things that make their game special, and I like that.

[21:17] <+BPIJonathan> A quick look at the KS shows that we are $33 from our first stretch goal, which is a three character set of the Dramatis Persona write ups, these containing Dracula, Adam (Frankenstein’s Monster) and Sherlock Holmes

[21:18] <+BPIJonathan> I had a long discussion with someone the other day that was using the Knights of the Round Table as the good guys and everyone else as a bad guy, made for a good talk and I loved what they did.

[21:19] <+BPIJonathan> The point of the setting is to have fun (and thats true with any game), dont worry about what Stephen and I do with our games…focus on what you want to do with yours.

[21:20] <+BPIJonathan> We are not going to arrest you for doing something different. 😀

[21:21] <+GaslightStephen> I agree, feel free to take the setting wherever you want. I love to see what people come up with.