Posted by saintnexan on December 9, 2016
Posted in: Q&A. Leave a comment

[20:46] <+LevLafayette> “Papers & Paychecks” of course comes from the classic cartoon by Will McLean in the Advanced Dungeons & Dragons Dungeon Masters Guide from 1979.

[20:46] <+LevLafayette> Inspired by the cartoon, the game posits a comic of modern working life where what can go wrong, will go wrong, and at the worst possible time. 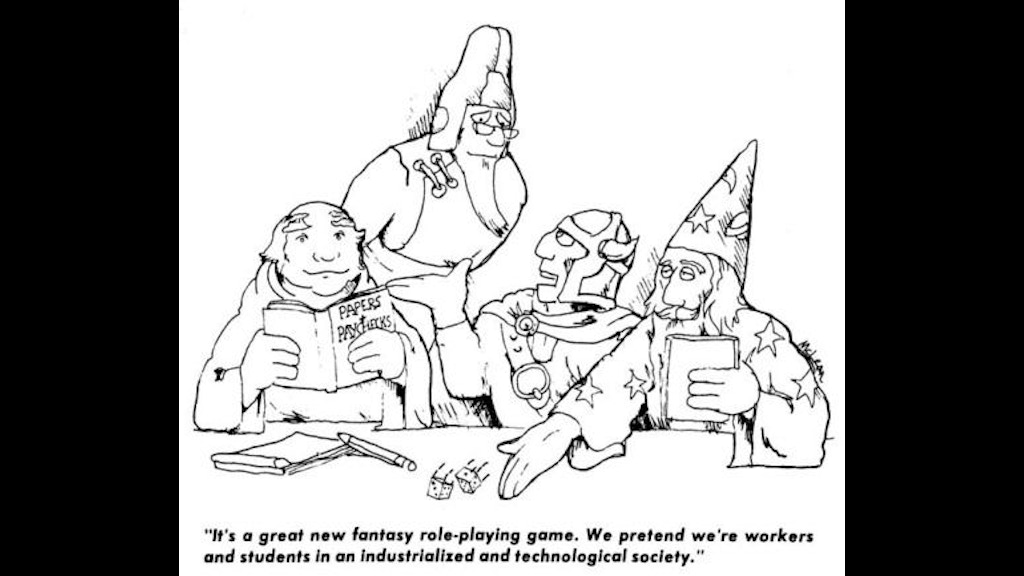 [20:47] <+LevLafayette> I have written the game for a non-profit gaming club (RPG Review Cooperative, Inc.) and all the proceeds will go to that club.

[20:49] <+LevLafayette> And to introduce myself? Well, I’ve done a lot of RPGing in my lfe, since the early 80s. I have an enormous collection of material, and have reviewed over a hundred items for rpg.net.

[20:50] <+LevLafayette> I’ve contributed to a couple of RPGs directly – Rolemaster, Fox Magic, as was a heavily involved playtester for RuneQuest, Basic RolePlay, and Traveller.

[20:51] <+LevLafayette> I have a tendency to start gaming clubs and organisations. So there was MARS in Western Australia which I started in 1988 and last year the RPG Review Cooperative.

[20:53] <+LevLafayette> Sure, it’s contemporary, that is 2016-2017, and mainly about “workers and students in an industrialized and technological society”.

[20:54] <+LevLafayette> Of course things have changed a lot since 1979, but I don’t think that “Emails and Direct Deposits” would have the same ring about it.

[20:56] <+LevLafayette> As for weird, not obviously. It’s not X-files or Laundry Files are anything like that. The “weirdness”, if you can call it that is narrative driven, like a tragic-comedy TV show.

[20:57] <+LevLafayette> The Boss (the GM) takes an active antagonist role against the players at certain times with a resistentialist attitude. That is, the world will actively conspire against them.

[20:58] <+LevLafayette> Now that is pretty weird is viewed entirely objectively (“Les choses sont contre nous”), but it certainly makes for an entertaining story.

[20:59] <~Dan> Is this a metagame in which the players are playing fantasy characters playing the game?

[20:59] <+LevLafayette> But just as a sneak preview, one of our playtesters is working on a “So You Want It Darker?” scenario based in North Korea which will be in the Cow-Orkers supplement. Again not weird as such, but almost gallows humour.

[21:01] <+LevLafayette> The core rules don’t presuppose a fantasy metagame, but it is an option in the Cow-Orkers supplement, which concentrates on the mental world which such players would have.

[21:03] <+LevLafayette> It’s in the cartoon! 🙂 Roll 2d6 versus target number. A bit like classic Traveller in that sense, but also influenced by contemporary games like Dungeon World, which allow for “success but with consequences”  etc.

[21:05] <+LevLafayette> I’ll release it with the next public Kickstarter update, it’s a “Résumé”.

[21:06] <+LevLafayette> Just going back to the core mechanic for a second there’s a couple of other interesting features. One is that *players* (not characters) have a metagame Luck score by which they can intervene and change results.

[21:07] <+LevLafayette> Secondly, on the mechanic itself, the rolled score equals a value which can be used to determine a degree of success as well against contested rolls.

[21:10] <+LevLafayette> It appears “old school” in many ways. It has the classic set (Strength, Dexterity, Intelligence etc). It has professions (Technician, Tradesperson, Administrator, Manager, etc), it even has levels (representing pay grade).

[21:11] <+LevLafayette> Plus it also has some more features like Perks and Flaws, a little bit like Hero System/GURPS/Alternity.

[21:12] <+LevLafayette> Something that should be mentioned is that the logic behind some of these features are inverted from their old school origins.

[21:13] <+LevLafayette> For example it is, in a way, a “gold piece system”. Whereas traditionally characters gained experience for acquiring gold, in P&P, you acquire gold (higher pay) for having experience.

[21:15] <+LevLafayette> Also, “levels” in early games represented a breakpoint for character abilities, in P&P they are an abstract relationship based on the number of successful projects completed.

[21:21] <+LevLafayette> You’re not going to get very far if you try Japanese without training. You may do better at more physical orientated tasks.

[21:22] <+LevLafayette> Something with noting is that the game leans towards providing detail for difficulty ratings – I see a lot of handwaving in contemporary game design which can lead to issues, I think.

[21:23] <+LevLafayette> Actually there’s quite a fair bit of physical work that needs to be done when objects themselves seems to be against you 🙂

[21:25] <+LevLafayette> Think of the influences on the game – Drop The Dead Donkey, Utopia, Swift and Shift Couriers etc. Physical events can and do happen in a comic fashion.

[21:27] <+LevLafayette> The key feature of combat is that someone wants to hurt you and put your character out of “the game” (i.e., out of work). The risk is that they might end up in the same situation themselves.

[21:28] <+LevLafayette> Most of the time failed skill rolls etc are annoying. Combat is deadly (whether physical, mental, or social).

[21:29] <+LevLafayette> So of course there is an initiative system (based on Dex for physical, Wis for mental, Cha for social). There are physical, social, and mental hit points, based on characteristics.

[21:30] <+LevLafayette> There are injuries which reduce your ability in those areas; if you hit 0 your unconscious, or have a breakdown, or have been expelled from the social group.

[21:33] <+LevLafayette> Yes, that’s exactly right. It is assumed that the character goes about their normal business day-in, day-out. But once every so often (about once a year or so for low-level characters) they go on a project.

[21:34] <+LevLafayette> A project is something new, different, unique (you can tell I have a postgrad degree in Project Management). It is an opportunity for success, recognition, improved pay grade – or disaster.

[21:36] <+LevLafayette> Physical actions, yes. Physical combat doesn’t come up often in playtesting, but it is not outside the scope of the game.

[21:39] <+LevLafayette> A high level manager is terrifying if they decide to engage in social combat with you. As they say in Paranoia “I’ve never met a boot I couldn’t lick”

[21:40] <+LevLafayette> One thing with regards to combat and skills, there is no additional die roll for damage. The difference between the contested attack and defense (whether physical, mental, or social) provides a base.

[21:41] <+LevLafayette> Then there is multipliers after difference to determine “damage”.

[21:44] <~Dan> I just appreciate effort being put into mechanics where they might easily be handwaved.

[21:44] <+LevLafayette> The thing is of course, the joke is a genre in its own right. Lew Pulsipher quizzed me on this asking why I would choose the mundane as a setting. It was a fair question, but narratives change the mundane.

[21:46] <+LevLafayette> Haha, more sample characters than a bestiary as such. There is a tiny handful of creature statistics.

[21:47] <+LevLafayette> Fortunately I have a gamer-biologist colleague is an absolute fanatic about getting stats right for animals. So if your character gets to work one day and there’s a cow in the office don’t be surprised 🙂

[21:48] <+LevLafayette> See? You can imagine how that would be the starting scene of a Papers & Paychecks scenario. How did the cow get there? Who put it there? Why is it there? And so the scenario unfolds..

[21:52] <+LevLafayette> Feel free to ask more questions if you like, this has been quite enjoyable.

[21:55] <+LevLafayette> Good meta-game question. The game is explicitly-designed around 2-3. Character level advancement and pay grade is based on successful project completion.

[21:56] <+LevLafayette> Given that characters at low level get around 1 project per annum, they are also subject to aging (and life events). They game game is designed that with a weekly session an entire career could be completed in a year’s play.

[22:01] <+LevLafayette> Apart from normal perks (e.g, law enforcement powers), the core rules don’t include this. The Cow-orkers supplement does discuss this.

[22:08] <+LevLafayette> Personally I prefer to play it “straight”, but in the right style SF/fantasy settings can work as well. Like Kevin Rubio’s “Troops” for example.

[22:12] <+LevLafayette> Thematically, something like Troops fits into Papers & Paychecks. Although apparently in that setting there is no paper! (There is Jedi mind control tricks.. Those were the droids you were looking for)

[22:14] <+LevLafayette> The response to the game has been quite good. It’s not as if we’ve been working on the marketing campaign full-time or anything like that. I believe the game will make it over its target.

[22:16] <~Dan> I think I’m about tapped out for questions… Is there anything we haven’t covered that you’d like to bring uip?

[22:16] <+LevLafayette> We’re hoping to pick up some people who are more US/EU based to pick up “Publisher” pledges, which is a license to print. I recognise that postage costs from AU to US/EU is annoying and we’re working on ways to get around that.

[22:18] <+LevLafayette> One thing that’s important from playtesting is the timing (like comedy shows). Gradual build-up of threads of situations then bring them all together in a chaotic hit.

[22:19] <+LevLafayette> Also, I’d like to mention that those who purchase physical copies can, if they want, get them signed and dedicated. Given that the first print run is likely to be quite small they might even be worth something in the future. 🙂

[22:21] <~Dan> And thank you again for your patience.  I think I may have to stop doing Friday Q&As now that my wife is working later.