Posted by saintnexan on December 6, 2016
Posted in: Q&A. Leave a comment 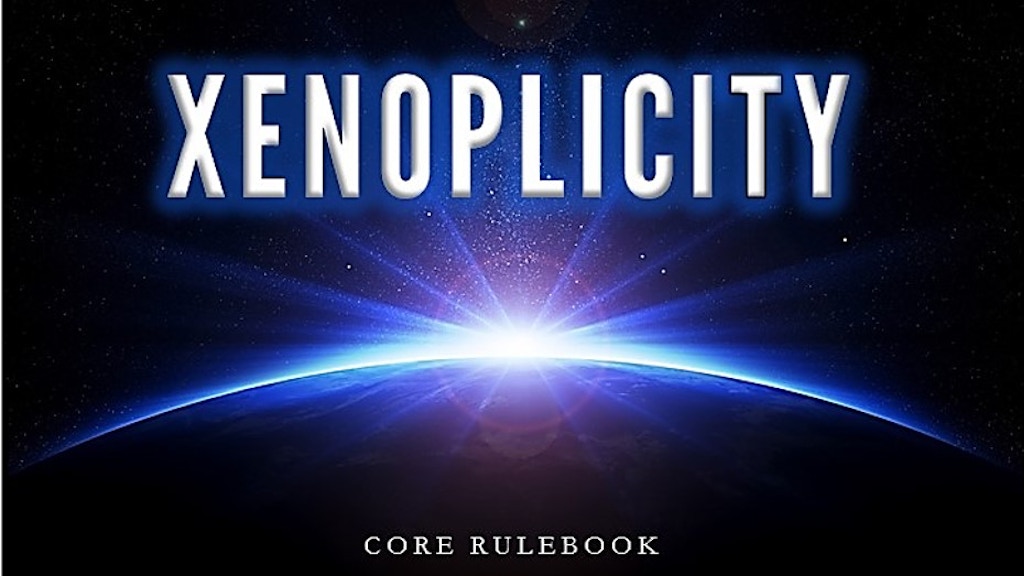 [19:09] <+MattMucci> The first goal was to create a streamlined game system that was simple to learn, easy to manage for the players, and it needed to play fast. Like really fast.

[19:10] <+MattMucci> As a gamer myself I’ve spent years playing games like Vampire the Masquerade, Exalted, and D&D and though they are all great, any game session worth playing took a good 6 hours or more

[19:11] <+MattMucci> Not to mention the library of books you’d need to reference

[19:12] <+MattMucci> So when developing Xenoplicity I wanted to build a game that solved that problem.

[19:13] <+MattMucci> Xenoplicity allows game sessions to run in only 2 or 3 hours which means your gaming group can get together much more often

[19:15] <+MattMucci> The second goal I had was to develop a game that provided a unique setting. Generic systems are great but we all know they require a whole lot of work on the Gms part of world building

[19:17] <+MattMucci> With Xenoplicity I’ve created a setting that blends elements of sci-fi and fantasy into something original and fun

[19:18] <+MattMucci> In addition, the game provides a pretty diverse selection of races and “classes” (what we call proficiencies) to choose from.

[19:19] <+MattMucci> So the game provides more options than what most games I’ve seen ever allow for, both in how you play and what you play as

[19:23] <+MattMucci> I imagine we will. For the kickstarter campaign I wanted to offer something different in PDF, rather than just a digital copy of the book. So the digital reward you’ll find on Kickstarter is actually a starter kit that comes with sample adventures, shortened rules, and pregen characters to play with

[19:24] <+MattMucci> The character sheet is done but I haven’t posted that as an update yet, was planning to do so in the next few days

[19:31] <+MattMucci> well pledge 50$ and get the physical game then, lol. no seriously if backers who pledged enough to get the starter kit want a full PDF version of the book I’d be happy to include that. I just thought they’d want to get something more than just a digital copy of the book itself

[19:33] <+MattMucci> Core mechanic: the game involves the application of something we call context with every roll. You always roll 2 dice.

[19:34] <+MattMucci> One die is governed by your attribute and the other is your context die. Context is a sliding scale, meaning that the more likely you are to accomplish something the larger that die gets and the smaller your oppositions die size gets in context

[19:37] <+MattMucci> So your dice pool is dynamic not static, it depends on what you’re doing and how you’re doing it

[19:43] <+MattMucci> There are different stages of context: even, tilt, major tilt, and rigged.

[19:43] <+MattMucci> So while your attribute die is fixed based on how you’ve built your character, the context is always subject to shift from scene to scene and even from turn to turn in a fight

[19:47] <+MattMucci> Moxie is another attribute and it’s skills include: Health, Stamina, and Willpower

[19:48] <+MattMucci> Other unique aspects of the game include the “Film Rating”. As we go into on the kickstarter page, Xenoplicity models itself after a TV show. Game sessions are called episodes, the game master is called the Director, etc.

[19:48] <~Dan> So it sounds like the skills are pretty broad, and that they’d be considered attributes themselves in other systems.

[19:51] <+MattMucci> Yes, we really went outside the box when putting this game together. The idea was to make something that we hadn’t seen before. We didnt want to copy what was already out there. We wanted to tackle issues that many great games suffer from by going at it from a different angle

[19:53] <+MattMucci> Yes right, The film rating is the difficulty that you can play on. They are modeled after the film ratings used in movies: G, PG, PG13, and R. The players get to set the film rating before each episode starts

[19:55] <+MattMucci> The higher the film rating goes the harder the game plays but it also increases the amount of experience earned in the episode.

[19:57] <+MattMucci> So maybe the players want to play on “G” and just breeze through the bad guys and focus on progressing the story being told or they can play on harder ratings if they really want to focus on character development and “level up” faster. Players decide the game they want to play

[19:59] <+MattMucci> Its very open-ended, the game presents you with our entire galaxy: The Milky Way. To be more precise the core book focuses on 3 specifics that are all simultaneously

[20:01] <+MattMucci> You have the a Galactic Society of multiple alien races known as the Imperium, you also have Earth (which the present year is 2032). 10 years prior aliens invaded and conquered the planet so it’s pretty much a mess, very post-apocalyptic.

[20:04] <+MattMucci> The third is the planet we call Mythos, it’s where fantasy creatures like dragons, centaurs, dwarves, etc. come from. There are other dimensions too like Sidosia (heaven), Odium (hell), and several more

[20:07] <+MattMucci> Nope, it works throughout the galaxy. Sorcery specifically only functions on worlds or where the elements can be found, as it draws its power from elemental forces. Thus it doesn’t work in the void of space. But the game also has witchcraft and divine magic like: necromancy, holy magic, unholy magic, and nature magic

[20:10] <+MattMucci> Sorcery is the overt channeling of magical energy that is laced through creation while witchcraft is channeled through the spilling of blood. Not only are they different thematically but also the spells available to each are vastly different.

[20:11] <+MattMucci> Sorcery is overt and more fantastical in what can do while witchcraft is more subtle and practical in its applications

[20:11] <~Dan> How powerful is magic? Can you give some examples of what it can accomplish on the high end?

[20:15] <+MattMucci> very powerful. Depends on the type. Some examples include: Destroy a city, curse someone with vampirism or lycanthropy. Transform yourself into a lich, summon God, etc. These are some of the more high-end powerful spells, they don’t all have such extreme effects

[20:20] <+MattMucci> Depends on who you are and where you are. On Mythos, it’s archaic like you’d expect for a fantasy based world. Magic is extremely prevalent and it’s people don’t have the same drive as on other worlds to industrialize

[20:21] <+MattMucci> Still, in remote pockets on Mythos you can find clockwork and steam-powered technology

[20:22] <+MattMucci> On Earth, there are cities that are now uber-advanced with alien tech, only problem is that mankind within those cities are under the rule of the Grey aliens who treat mankind more like lab rats than anything

[20:24] <+MattMucci> Out in the wastelands of Earth people just struggle to survive and are barely more advanced than what we are today (2016) among alien monsters, fallout landscape, etc.

[20:28] <+MattMucci> Some of these are original races so the names won’t all be familiar. There are also sup-races like: Djinn, Gnome, Pixie, Nymph, Spriggan, Bugbear, Hobgoblin, Gremlin, Orc, and Troll

[20:30] <+MattMucci> Avarti, Krill, Polliwog, Pawn, Preterian, and Taukkul are all alien races that along with the Grey aliens make up the Imperium

[20:35] <+MattMucci> There are also the sub-classes of: Mage – wizard or warlock, Rogue – Con-man, Hacker, or Thief, and Thaumaturgist – Paladin, Druid, Diabolist, or Necromancer

[20:38] <+MattMucci> So if you wanted to make the classic “white knight” you might select Soldier/Thaumaturgist- Paladin

[20:42] <+MattMucci> During gameplay if you are ever doing something that is outside what your proficiencies allow for, the director calls you out and says “you’re out of your element!”. Being made out of your element means you dice roll result is halved

[20:44] <+MattMucci> yes and no. We don’t provide an actual section of the book called bestiary but we do provide details for misc. creatures such as Elementals, undead, demonic entities, celestial entities, robots, etc.

[20:45] <+MattMucci> We also give advice and guidelines for creating your own unique monsters and NPCs

[20:50] <+MattMucci> Little or no book referencing needed during gameplay. Attack and damage are combined into a single roll rather than being multiple rolls (this saves a huge amount of time) and no character, no matter how advanced, can ever have more than 5 HP (in a category)!!

[20:52] <+MattMucci> Each of those 5 Attributes I mentioned above has it’s own HP that you get to “level up”, when a specific HP is reduced to zero than your character suffers a motivation. Motivations are a predetermined way you must role-play your character until the end of the scene. There is also stunt tokens, and so much more.

[20:54] <+MattMucci> I guess I’d just like to ask for everyone’s support on kickstarter and feel free to email or message me with advice or more questions you might have. xenoplicity@gmail.com

[20:54] <+MattMucci> Me and my gaming group love playing Xenoplicity and we hope everyone else will enjoy it as much we do and the playtesters have