[19:05] <+Mark> I’m Mark Plemmons, and right now I’m running a Kickstarter for MASHED, a Powered by the Apocalypse hack about medics in a Korean War MASH unit. I started in RPGs full time with KenzerCo in 2001 thru 2011, and since then I’ve been self publishing as a hobby with my own Brabblemark Press. 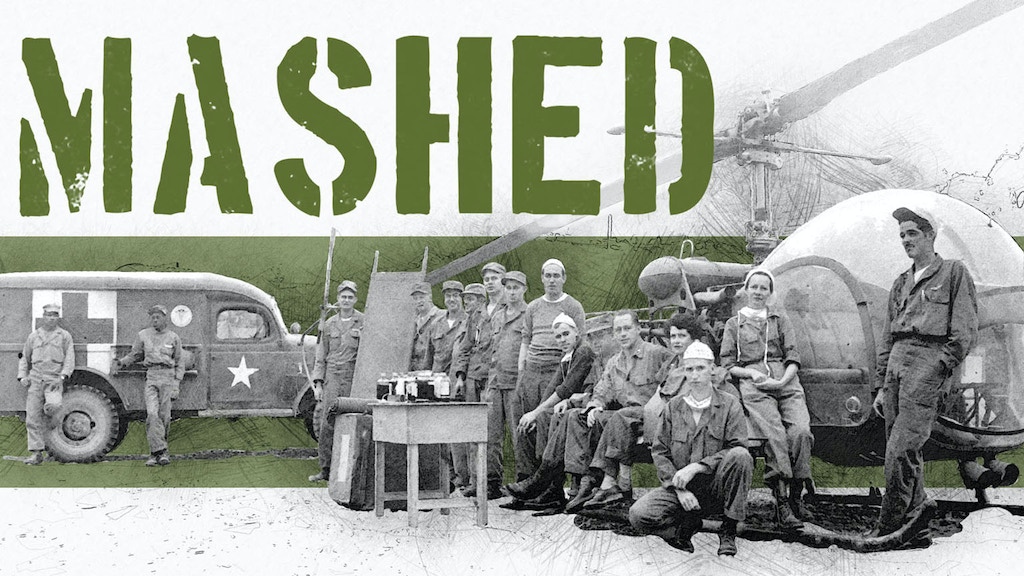 [19:08] <+Mark> I’ve always been a fan of M*A*S*H, though I’m fairly new to PbtA games. Coincidentally, I was watching M*A*S*H on television – well, I had it on as ‘background’ noise as I sometimes do – while I was reading through Jason Morningstar’s Night Witches RPG, which is about female Russian pilots in WWII. It just struck me then that a Korean War MASH unit would make

[19:09] <~Dan> Seems like an unusual choice, given the combat focus of most RPGs. How has the reception been so far?

[19:10] <+Mark> The reception’s been really great so far, though the percentages are a bit surprising.

[19:10] <+Mark> I expected more PbtA gamers over non- or casual gamers, but it’s really been the opposite.

[19:11] <+Mark> I’ve gotten lots of great stories and feedback from medics, soldiers, and people who had relatives in the war.

[19:11] <+Mark> So that’s been an added bonus, though it’s been a bit of a challenge because I’ve been trying to send personal messages to every backer. (done)

[19:15] <+Mark> Well, like most PbtA games, the GM (or in MASHED’s case, the CO) just gets the ball rolling with story ideas and then lets the other players take it from there. “Play to find out what happens” is the general term. So, there’s going to be a LOT of variation depending on who the players are. Personally, I like to start off with a hook and interrupt it

[19:18] <+Mark> In the book, I’ve got a “Phases” chapter that takes you through the course of the war, gives overall events, and at least one sample idea for each month of the war. The CO chapter also has a lot of threat and event samples. For instance:

[19:18] <+Mark> A high-ranking officer declares that beer and liquor will no longer be allowed in camp. Do you skirt this ruling or obey it—or find a way to reverse it?

[19:19] <+Mark> Someone is pilfering small valuables all around the camp. Can you catch the culprit—and what will happen if you do?

[19:20] <+Mark> A well-liked NPC attempts suicide (and possibly succeeds), spreading low morale and other problems throughout the compound. How do you deal with this tragedy?

[19:20] <+Mark> So, you can go from light comedy to dark tragedy, or ideally a mix of both to really represent the nature of the war. (done)

[19:23] <+Mark> Well, it depends on the players, but my idealized version is a mix of comedic and tragic. That’s actually built into the rules – you’re encouraged to do fun things to relieve the stresses you’re under from all the death around you.

[19:26] <+Mark> You gain Stress Points. Sometimes the rules impose this as the result of a failed medical move, or sometimes the CO may impose it if the situation seems appropriate. If you accumulate 6 points, you get a stat penalty or suffer a mental breakdown.

[19:27] <+Mark> However, you can alleviate this by using the Relieve Stress move to remove Stress Points, or you can change your character role as part of your coping mechanism to deal with the stress.

[19:28] <+Mark> You choose your Role at the start of the game. It’s like your overall personality type, and gives you a unique character move. (done)

[19:30] <+Mark> The basic roles are: Bully, Casanova, Clown, Gray, Misanthrope, Operator, Sky Pilot, and Sticker. Want me to elaborate on one or more of these? (done)

[19:32] <+Mark> The Gray is the guy (or gal) who tries to avoid attention and just wants to get away with doing the minimum amount of work. They also keep their eyes and ears open so they tend to learn the secrets of other people. Their unique move is “Pass the Buck.”

[19:33] <+Mark> When you avoid doing something, roll +luck. On 10+, you get away with it. On 7-9, you deflect the charge so that someone else takes the blame—and knows what you did. On a miss, you get caught passing the buck and end up in worse trouble.

[19:34] <+Mark> Your role also affects your interactions with other players. For instance, the Gray starts with a –1 to Hx (History) with the Clown and +1 to the Operator. Others are Hx +0. More on that in a moment.

[19:36] <+Mark> If you’re a fan of M*A*S*H, you’ll probably know when I mean when I say to think of Hawkeye in the later seasons. In the early seasons he’s more of a Casanova, but later on he’s more of a Misanthrope. He’s seen so much pain that it’s really affected him.

[19:37] <+Mark> The Misanthrope finds it hard to deal with people except how they can help him.

[19:37] <+Mark> His unique move is: YOU OWE ME: When someone asks you for a favor, and you do it, roll +luck. On 10+, take +1 ongoing for all interactions with them until they do you a similar favor in return. On 7-9, take +1 forward, and expect they will eventually do a smaller favor in return.

[19:38] <+Mark> “Sky Pilot” is an old slang term for someone who’s very religious. Their unique  move is: TEMPTATION: Choose one: alcohol, drugs, money, or sex. When you resist your temptation, take +1 forward. When you succumb, you can remove a condition, but you’re Pushing Your Luck.

[19:40] <+Mark> History (the medical abbreviation is “Hx”) is a special stat that indicates how well you know a person and what kind of relationship the two of you have. It may be loving, ambivalent, one-sided, distant, tense, brotherly, and so on.

[19:41] <+Mark> As the game progresses, you may find that the game sometimes places your character into an intimate situation with another player character. When that happens, you may gain +1 Hx or lose –1 Hx with that person; whether the Hx is positive or negative depends on the circumstances.

[19:46] <+Mark> Combat’s definitely a possibility, but a rarity. Most combats will probably be fistfights between allies. The MASH usually gets a few hours advance notice before enemy forces arrive, but a lone soldier might wander into camp, or a wounded POW might attack, or the medics could be sent out into the wilderness or the front lines, and encounter hostiles there.

[19:48] <+Mark> The medical scenes in the operating room are the cooperative scenes where players work together to defeat an enemy – in this case, death.

[19:52] <+GenoFoxx> (I was sort of trying to answer Dan’s question for you my apologies for being presumptious)

[19:52] <+Mark> Next, that player or another (depending on their playbook/specialties) will make a Prescribe move.

[19:53] <+Mark> A good Diagnose roll gets a future bonus or extends the countdown clock by 1 segment (more on that in a moment).

[19:54] <+Mark> Next, the surgeon on that patient chooses one of the patient’s wounds and makes a Treat move.

[19:55] <+Mark> There’s a playsheet for each patient that has a human figure on it. Body parts (head, chest, etc.) each have a traditional Apocalypse World style harm clock that shows how much damage that area has. There’s also an overall countdown clock that shows

[19:56] <+Mark> The countdown clock ticks down as the rules indicate, or when the CO wants to increase the tension and drama.

[19:57] <+Mark> If the surgeon makes a bad Treat move, an assistant can help to reduce the consequences, or another assistant (the anesthesiology) can help to keep the coundown clock from ticking down.

[19:57] <+Mark> Once all the wound clocks have been reduced to 2 or less, the patient is stabilized, and can move to post-op.

[19:59] <+Mark> These non-vital parts of the body should only be treated after the primary clocks have been stabilized. For instance, a wounded soldier may have a primary torso clock with 3-harm and a secondary leg clock with 5-harm. You may choose to operate on the leg first, in hopes of saving it, but if the countdown clock fills before you stabilize the torso wound, the p

[19:59] <+Mark> So there needs to be cooperation with the players working on the patient (empty positions can be filled with NPCs), and there’s decision making to do as well.

[20:00] <+Mark> Your job is to do the greatest good for the greatest number of patients, and this means making hard choices. For instance, will you prioritize an enemy over an ally, even if the ally seems less likely to survive? Can you amputate a GI’s legs just to get to the next casualty more quickly? What will you do when the patients are civilians and children?

[20:02] <+Mark> I think you need at least 3 (including the CO). Personally, I like 4-5, but you could go higher if you can manage a large group. Operating scenes would be improved, actually, because you could have multiple ‘tables’ of wounded.

[20:05] <+Mark> Yes, due to shipping and such, I expect backers will get the PDF about 2-4 weeks before the books ship, though that may change.

[20:10] <+Mark> I really like how ‘hackable’ the AW rules are for different themes and settings. It’s easy to take bits and adapt them for different purposes.

[20:13] <+Mark> You choose your rank early in character creation. Depending on which rank you pick, you get different point spreads to apply to your playbook stats. Some characters, like the Grunt and Corpsman, have moves that let them get away with disobeying their superiors, and things like that.

[20:14] <+Mark> So a captain might be the Executive Officer, and a major would still follow his authority when it has something to do with the xo’s responsibilities.

[20:16] <+Ceroth63> If your game is set early in the war, how might you handle how intense the casualties and the fighting. Can you incorporate actual casualties from real battles like Chosin Reservoir

[20:17] <+Mark> Grunts are the enlisted who manage the patient records, procure non-medical supplies, guard against enemies, maintain ordnance, prepare food, and so on. They don’t typically work in the operating room scenes, but they’re vital to running the rest of the camp, so I had to include them. The same goes for the Cowboy. (done)

[20:19] <+Mark> Ceroth63: Technically and historically, the first year of the war would be really tough to roleplay accurately, since there wasn’t much time for the medics to relax. In game, you really have to take things at a slower pace, but you can add more frequent bug-outs and surgical scenes to represent that.

[20:21] <+Mark> Dan: Playing a Cowboy means you’re either a helicopter pilot, or the chief medic in charge of the motor pool.

[20:23] <+Ceroth63> Can you adapt the game to be in Vietnam since I read that there were MASH units there and even in the First Gulf War.

[20:26] <+Mark> I’ll probably release some short 1- to 2-page ‘playsets’ that provide some specific story hooks and characters. I might even come up with ideas for new roles, but otherwise the game is really complete.

[20:36] <+Mark> MASHED has a figurative TON of info on how a MASH unit operated in the war. I spent over a year digging through various books, journals, military newsletters and field guides, and so. If you’re interested in learning more about a MASH, there’s a lot of info here that hasn’t ever been gathered together before.

[20:38] <+Mark> Also, I made sure to include sections on mature content, like racism, sexism, and gender issues. How strongly you deal with them depends on what you want in your game, but it was important to me not to ignore the things that really happened. it’s not the focus of the game, but can be an important part.

[20:40] <+Mark> Yeah, sounds like a plan. I have a little girl sitting next to me that should get to bed. She’s been enjoying staying up late and watching cartoons on Netflix.