Posted by saintnexan on September 19, 2016
Posted in: Q&A. Leave a comment

[19:02] <+JamesGantry> Ok I am James Gantry I am the creator of the Chronicles of Aerthe Fantasy RPG 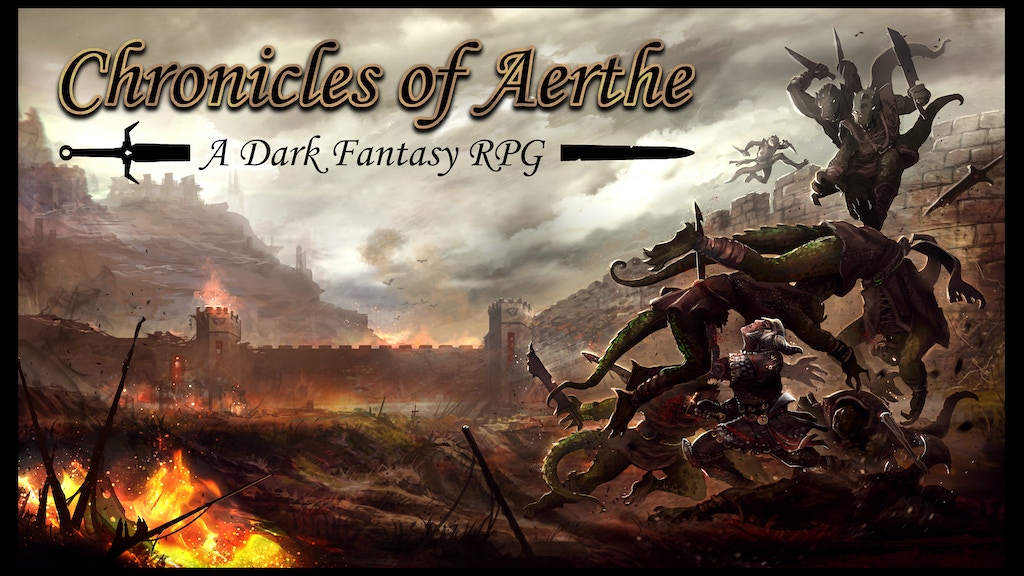 [19:05] <+Doctor> Do you have a Kickstarter link we can look at? I try to read up before I try to ask questions

[19:06] <+JamesGantry> The game is unique in the sense that the world is open to hundreds of different worlds that the player can experience, each with their own races, monsters and laws of magic and even physics

[19:07] <+JamesGantry> some of these worlds have merged with the starting world, others are accessible via fractures in reality

[19:07] <+JamesGantry> all the worlds are set within the same period

[19:08] <+JamesGantry> Professions are what you call yourself or how others see you, whereas Careers are actual jobs you train to do

[19:09] <~Dan> (You don’t actually have to end every statement with “done” — just when you think it might not be clear that you’re done after an extended statement, for example. 🙂 )

[19:10] <+JamesGantry> professions function by allowing you to seek out the skills that make that profession, careers are only available via guilds

[19:12] <+JamesGantry> not a problem you just need to learn it, characters may chance their profession as many times as they like, also others may see you as something else

[19:13] <+JamesGantry> for example if you are a warrior, but tend to spend a lot of time killing trolls in forests, the nearby village may see you as a hunter

[19:14] <+JamesGantry> we have a character sheet example on the website, but that is changing

[19:16] <+Doctor> What’s the difference between Abilities and Skills?

[19:17] <+JamesGantry> thats one of the things that is changing, we are ridding the sheet of stats as they serve no purpose, and focus is more important

[19:17] <+JamesGantry> abilities are ‘skills’ that are natural whereas skills are trained

[19:18] <+JamesGantry> the focus allows you to choose how your character uses their skills or abilities

[19:20] <+JamesGantry> yeah, ok so you will have a target number based on the difficulty of a task, the player would choose a skill or ability, then add that to the focus and roll 2D6 with numbers over being a success

[19:20] <+JamesGantry> so for example a locked door, they would add the pick lock skill to the Shadow focus and then roll 2D6

[19:22] <+JamesGantry> through their stamina focus

[19:26] <+Doctor> there are a lot of moving parts here: Abilities, skills, focuses, talents, techniques, a  variable TN system that requires 3 steps to determine success… How long do character creation and combat take generally?

[19:26] <+JamesGantry> damage bonus is based on stamina and your background learning so they are influenced by other factors

[19:27] <+JamesGantry> well talents and techniques add an extra dice to the roll, character creation is quite involved and can take about half an hour, combat is pretty quick, as long as you know what you wanna do

[19:28] <+JamesGantry> talents and techniques act like a wild die

[19:30] <+JamesGantry> the more power you put into a spell the greater the effect

[19:31] <+JamesGantry> sort of, mages are able to store natural energy which they can then use to form spells, the more power they use the more complex or powerful the spell, also components etc enhance it

[19:31] <+Doctor> So, can you walk me through a roll, from building a pool to determining a TN to rolling and determining the result?

[19:32] <+JamesGantry> also the points needed can be effected by time spent, the quicker you cast the more power needed

[19:34] <+JamesGantry> ok so that locked door, I will say the TN is 20, so you add your picklock skill to your shadow focus (Shadow is sneak) if you have a pick lock techinique you declare it, then you roll the 2D6, or 3D6 and if the total is over 20 its done

[19:35] <+JamesGantry> that would depend on your skill and focus

[19:38] <+Doctor> and if the lock is trapped, I need the trapped technique to avoid being hit by it?

[19:38] <+JamesGantry> each skill or ability can have up to 3 different techniques or talents linked to it

[19:39] <+JamesGantry> not really but instead of using shadow you would use the favour focus and hope the gods are on your side

[19:40] <+JamesGantry> also if you have the disarm traps skill you could always try that first

[19:42] <+JamesGantry> damage is rolled using the damage bonus plus the damage of the weapon

[19:43] <+JamesGantry> armour and damage tolerance is minused off the result and the rest effects the character

[19:44] <+JamesGantry> the weapon always does the same damage what changes is the force of the hit i.e. the damage bonus

[19:49] <+JamesGantry> but different realms will bring with them new and different races

[19:50] <+JamesGantry> the Soura are blind during the day with perfect vision at night, they come from a night realm, but magic has allowed them to have the equivalent of night vision during the day

[19:51] <+JamesGantry> plus though they are human like they are not human

[19:51] <~Dan> What are the Druegar and the Ilvan like? Any interesting twists there, or are they the “standard” Dwarves and Elves?

[19:54] <+JamesGantry> the Druegar were genetically created as a slave race and the Ilvan are pretty cruel and live in very sparse surroundings, the Vildal are a wild elve variant, who worship strange gods

[19:56] <+JamesGantry> the ilvan are not the immortal, poetry and art loving, they have long lives that have made them pretty jaded as they have seen it all so tend to keep their lives pretty minimal

[19:56] <+JamesGantry> they also get bored quickly and look down on the other races, the cruelty comes with boredom

[19:57] <+JamesGantry> of course not all are like this and some use the thrill of adventuring to keep themselves entertained

[19:59] <~Dan> What’s the tech level of the setting? Seems like I saw mention of flintlock pistols?

[20:00] <+JamesGantry> yeah that’s pretty much the tech level, these were brought to Aerthe by the E’Lau who are a bit ahead of the curve

[20:00] <+JamesGantry> the E’Lau have the flying cities and hunt dragons

[20:03] <+JamesGantry> yeah the glands from the dragons, the dragons are hunted and then processed, their glands are broken down into essence depending on the type of dragon, so a Blue dragon, or electric dragons essence would go to fuel the lamps

[20:03] <+JamesGantry> whereas a fire dragon would fuel forges

[20:04] <+JamesGantry> the glands are at the back of the throat and power the breath weapons

[20:05] <+JamesGantry> dragon hunting is a major industry in the game

[20:06] <+JamesGantry> dragons are malicious and clever

[20:08] <+JamesGantry> when a dragon is killed in our game every part is used, none of this kill it steal its treasure and then walk away, no pointless slaughter for wealth

[20:10] <+JamesGantry> well we don’t really have a cosmology, the game is based around parallel worlds that orbit the Aerthe

[20:11] <+JamesGantry> their are gods, but they live within the fabric that hold the realities together

[20:11] <+JamesGantry> and are indifferent as long as they are worshipped by praise or war

[20:13] <+JamesGantry> the game is set after a convergence, a magical event that ripped reality apart causing all the alternate Aerthes of merge and synchronise, some left echoes as they passed through the main worlds realities, these echoes were parts of the reality, so forests appeared in deserts, or cities within cities

[20:14] <+JamesGantry> the realities are now fractured and the realms orbit each other, allowing passage through these fractures into other realms

[20:17] <+JamesGantry> the fractures are monitored by navigators that try to map out the orbits of the realms as they pass, it is a simple matter of passing through a fracture and seeing where you appear

[20:18] <+JamesGantry> with help from the navigators you should be able to have an idea of where you are headed and how long before it passes again

[20:19] <+JamesGantry> they can be almost identical to being totally different, a place where your magic either no longer works or works differently, new races, monsters etc

[20:21] <+JamesGantry> none, but we do include a realm creator for GM’s, and we will be releasing a Realm source book

[20:22] <+JamesGantry> the core book is mostly rules and descriptions of Aerthe,

[20:23] <+JamesGantry> there is a bestiary of the most common monsters and creatures

[20:26] <+JamesGantry> but each has a twist, for example trolls have a cameleon ability and Goblins can teleport

[20:27] <+JamesGantry> yeah we have gaints, they live in the plain of anchors and caretake the huge chains that hold the floating cities of the E’Lau in place

[20:29] <+JamesGantry> yeah and scary as they blend with their surroundings

[20:29] <+JamesGantry> Goblins are always seen as weak in games, they are weak in chronicles but they have a teleport as defense

[20:30] <+JamesGantry> so they can blink and reappear somewhere else

[20:32] <+JamesGantry> not really, its down to the moral choices of the characters, for example the Faith could be seen as the bad guys as they suppress the people and magic, but they also help a lot of people, the free cities are seen as good because they allow mages to act openly and have lax laws but they also support slavery

[20:33] <+JamesGantry> some monsters are evil I guess, but then they are just trying to survive. its very grey when it comes to good and evil

[20:34] <+JamesGantry> the Faith controls the west side of the main Continent, a very militant power, that suppresses magic and forces their beliefs on others, anyone that does not comply are branded heretics

[20:37] <+JamesGantry> by saying mages must belong to the Iron Tower, which is the main Mages Guild, which are themselves very much a traditional form of magic, many mages hide their power and study with the druids or in the free cities

[20:38] <+JamesGantry> yeah in the Wyr Wood, they teach more diverse types of magic

[20:40] <+JamesGantry> theres a few types, ritual, elemental and necromancy are the more traditional types, they their is nature, illusion, bardic, sorcery and witchcraft

[20:42] <+JamesGantry> Witchcraft is more about curses, divination etc and Sorcery is more summoning and calling upon dark gods

[20:47] <~Dan> Is any kind of magic akin to the traditional “fireballs and lightning bolts” stuff?

[20:49] <~Dan> In the time remaining, is there anything we haven’t covered that you’d like to mention?

[20:50] <+JamesGantry> I would like to say that this is our first major game and we are a very small and new publisher, so we need all the support we can get, to simply sharing stuff to pledging