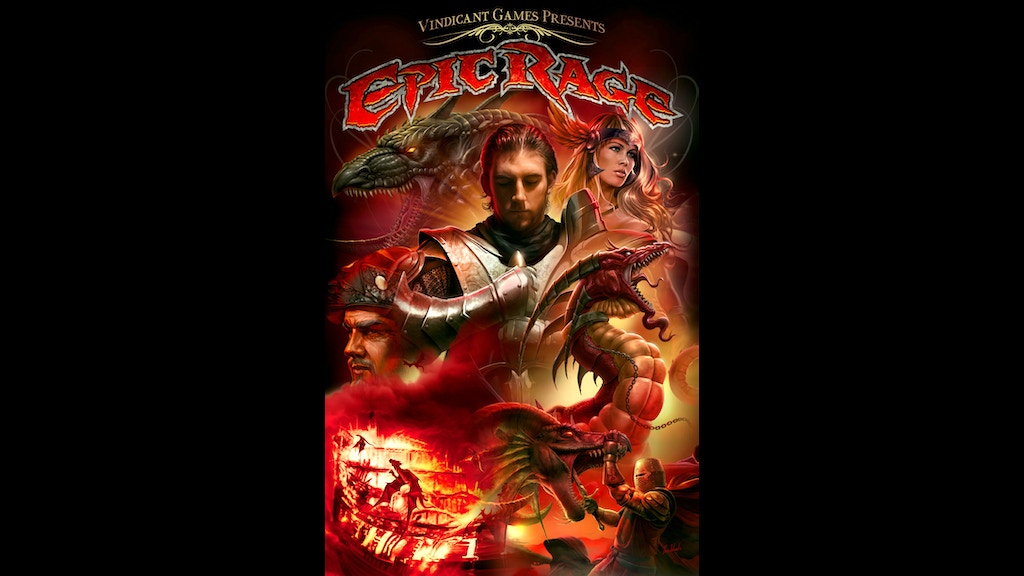 [19:03] <+HubertLuallen> This project has spanned several years of writing and play testing and is finally ready for publication once we get some illustrations. I’m eager to answer any and all questions, and to receive any feedback on the KS. (Done)

[19:04] <+SirGene> I was in and out of the casual conversation last night.  Does this span Fantasy to SciFi, the one system?

[19:05] <+Terry> Sorry. I didn’t get the link to the Kickstarter to check the game out yet. I’ll just read the posts for a while before I ask any questions.

[19:07] <+HubertLuallen> Epic R.A.G.E. is a medieval fantasy rpg. It is designed to be a free-flowing system in a single volume. It utilizes a point build system for character generation and 6-sided dice for action resolution.

[19:09] <+HubertLuallen> Not in it’s present format. It is designed to accommodate any setting or to permit the creation of one on the fly.

[19:10] <+HubertLuallen> There is a character sheet on the KS, but I believe someone mentioned having some difficulty reading it in the jpg format KS requires.

[19:13] <+Janus> I recommend someplace like dropbox or a public google drive, then jus tpost the ur;l to it.

[19:17] <+HubertLuallen> The attributes (Stats and Skills) are paired to represent any action in the game. For example, attacking with a 2H sword would use Strength and Melee while sneaking through a forest would use Reflexes and Search.

[19:19] <+HubertLuallen> Each rank of an attribute represents a D6, with the modifiers (Mods on the character sheet) added to the resulting total of all dice rolled.

[19:24] <+HubertLuallen> That is best explained by the point build system. All attributes start at rank 1 for free. Each +1 modifier costs 2 BP. An attribute must be increased to its current rank +3 before the rank increases. So, 6 BP will buy an attribute to 1+3 while 8 BP would buy a rank of 2

[19:28] <+HubertLuallen> Normal humans may purchase attributes as high as 3+3 at character generation for 2 BP per increase (ends up as 22 BP for a 3+3). Once play begins, attributes can be raised further but at incrementally higher BP costs.

[19:32] <+HubertLuallen> Yes. I differentiate between how magic works (narrative magic) and what magic does. Narrative magic is left up to players (with GM control, of course). The rules focus on what effects magic has on the game.

[19:33] <+HubertLuallen> Magic is grouped broadly into Areas of Casting (AoC on the character sheet). Once a player has purchased access to an AoC, they can then invest points to Specialize.

[19:37] <+HubertLuallen> Let’s say we have two characters that want to wield magic. One decides that he will use a wand and esoteric vocalizations to cast his magic. The GM could therefore determine that most of his spells will utilize Wits and skill appropriate to the situation and effect. A second character wants to use magic channeled through her physical form in the manner of….

[19:38] <+HubertLuallen> legendary shao lin monks. The GM then declares that her magic will likely involve Fitness paired with an appropriate skill or secondary stat in order to function.

[19:40] <+HubertLuallen> Fireball: Step 1 is to purchase the Elemental: Fire AoC. This would permit the player to cast a fireball. Let’s say that targeting the spell requires Wits and Range. The GM sets a target number that the player then has to exceed on that action roll.

[19:42] <+HubertLuallen> If the spell is successful, it does 1D6 of damage, plus 1D6 per rank of Wits the character has. If a more potent blast is desired, Specializations may be purchased to increase the effect.

[19:43] <~Dan> How would you account for the explosive nature of a fireball to distinguish it from a direct attack?

[19:43] <+HubertLuallen> Another way to improve the effectiveness of a spell or strike is through Improvements (Ups on the character sheet.)

[19:45] <+HubertLuallen> The explosion would target the hex rather than a single character. As such, it would likely permit the subject to attempt a Reflexes and Melee roll to reduce or avoid the damage.

[19:45] <~Dan> Would the fact that it’s an explosion be reflected in the casting difficulty?

[19:47] <+HubertLuallen> Spells can be defined by the player through the Specialization and Fatigue system. Effect, area, range, number of targets, duration, and most other aspects can all be adjusted as a spell is cast. However, the more potent the spell, the more Fatigue it will generate.

[19:50] <+HubertLuallen> Fatigue impacts all of a character’s actions. It accrues as actions are performed. It’s effect is to degrade the available dice pool a character can use for their actions. It is Recovered by forfeiting an action to rest.

[19:53] <+HubertLuallen> In theory, there is no upper limit. Ideally, a character wants as little Fatigue as possible. Every four points accrued costs the character an action die.

[19:54] <+HubertLuallen> However, if a character attempts an action for which Fatigue removes all their dice, they are exhausted, the action immediately fails, and they must spend their next action recovering Fatigue.

[19:58] <+HubertLuallen> In most instances, no, as it is generated by a character’s voluntary actions. There is an optional rule for called shots that force Fatigue onto a character, in which case they could attempt to resist.

[20:00] <+SirGene> Interesting system as there are no artificial limits.

[20:02] <+HubertLuallen> A character wields a 1H sword, which the player finds generates 1 Fatigue. The character is wearing Scale Mail, a medium armor that adds 3 Fatigue. However, this character has specialized in medium armor, thereby reducing its Fatigue to 2…

[20:04] <+HubertLuallen> The character then decides to put everything they can behind a strike. Checking the stats for a 1H sword, it affords 2 Ups (Improvements). The character now swings the sword, generating a total of 5 Fatigue.

[20:08] <+HubertLuallen> Yes. With weaponry, Ups translate as additional damage. Each one representing an extra D6 on the damage roll.

[20:11] <+HubertLuallen> With magic, Ups can affect any aspect of the spell, from damage to area to duration, among others. A caster may add one Up to a spell for each Specialization they have in the applicable AoC.

[20:13] <+Terry> I like the use of a d6 system in a game. I like that it takes a minimum of time to make a character up, as I’m having to make myself like this part of playing a RPG. I’m liking it more now than I use to, as I know I should for someone who wants to run games. I take it this is your second attempt at Kickstarting this game. Am I wrong on this?

[20:14] <+HubertLuallen> Most overt actions do. The determining factor is: is the action taxing in some way on the character? If not, talking for example, then it does not generate Fatigue. However, a character attempting to persuade a crowd would generate Fatigue.

[20:15] <+HubertLuallen> Terry, you are correct. This is our second KS launch. The first was, sadly, unsuccessful. Hoping to turn that around. 🙂

[20:17] <+HubertLuallen> I have showcased Epic R.A.G.E. at our local gaming convention for three years running now, each time with enthusiastic reception.

[20:20] <+Terry> I think I asked about running a second Kickstarter of someone else for their game if it didn’t take the first time. I thought I was told you couldn’t do that. I’m glad that is not the case. I wish more failed attempts at a good thing on Kickstarter would get a do over.

[20:21] <+HubertLuallen> The basics (and this will be REALLY simplified) are Initiative, Action, Defense, Mitigation, and Damage. Initiative is determined by a Reflexes and Wits roll which defines not only action order, but number of actions as well.

[20:23] <+HubertLuallen> Action rolls (Attacking, casting magic, etc.) are pitted against either a target’s Defense or a resistance roll. If successful, the Damage or Effect roll is then compared to any applicable Mitigation to determine overall effectiveness.

[20:26] <+Terry> I’ve asked this of other game designers already, but why did you personally pick a d6 system and not a d20 or some other system for your game.

[20:28] <+HubertLuallen> D6es are common, readily available, and cheap. They also make the math easier to cope with. While I have done extensive calculations behind the scenes, I wanted to minimize the amount of math players had to deal with.

[20:31] <+HubertLuallen> Yes, it does. I have drawn my bestiary from existing mythologies so as to avoid any possible copyright issues. As such, I have also taken the opportunity to include a brief history of origin location of the creatures.

[20:32] <+Terry> It was the same answer I got from others and I too thought about creating a RPG with the d6. Do you think that the reasons you give here is a growing trend in game design for RPGs? Do you think that other dice systems are in danger of being obsolete because of this reasoning?

[20:33] <+HubertLuallen> Terry: I think the D10 and D20 systems have their places and certainly their fanbase. They also do what they do quite well. But there is an inherent ease of use in a D6 system that makes it appeal to a wider audience.

[20:35] <~Dan> How large is your bestiary, and do you have any interesting twists on fantasy standards?

[20:36] <+Terry> You use existing mythologies for your bestiary. Nothing wrong with that and there is a lot there, but don’t you want to create your own unique creatures? I know it would take a lot of homework on your part to make sure that you don’t copy something already done, but I think it would go a long way into making your game stand out to have your own beasties.

[20:37] <+HubertLuallen> My bestiary currently has about 40 creatures, not including altered fauna such as dire wolves and such. I will certainly be designing a setting with original baddies going forward, but the core book is meant to be as wide-reaching as possible.

[20:37] <+SirGene> If we are discussing design, the Kickstarter campaign seems kind of aggressive for a first time designer.  Have you thought about using DriveThruRPG to cut your cost?

[20:41] <+HubertLuallen> Trolls in Epic R.A.G.E. are born extremely beautiful. However, their legendary healing ability has a downside. Their wounds always heal with horrible scarring and disfiguration. Troll society is highly matriarchal with one female presiding over and protected by the rest of the troupe.

[20:42] <+HubertLuallen> She is the epitome of loveliness, but the rest of the group will be hideous monstrosities.

[20:46] <+HubertLuallen> SirGene, to respond to your question: I have looked into minimizing production costs and have tracked down the print service that DriveThruRPG uses. Cutting out the middle, as it were.

[20:48] <+SirGene> Well perhaps you will pass that on to me.  CustomerService@FunQuestGames.com.  But do you now have a minimum order?

[20:49] <+HubertLuallen> As for electronic publishing, we have secured the VindicantGames.com domain, but it is still under construction. Right now it redirects to an old wix page that I don’t have the access info for anymore.

[20:56] <+HubertLuallen> As to races, I have included an extensive system to create custom races in the GM section of Epic R.A.G.E. In the interest of keeping production costs (and thereby consumer costs) to a minimum, I have not designed player races in the core book. I do, however, have several original races for the setting that will come a bit later.

[20:56] <~Dan> So in what remains of regular time, is there anything we haven’t covered that you’d like to bring up?

[20:58] <+HubertLuallen> Hmm… Just to thank you for the opportunity and the platform to introduce my project a little bit. Is there anything you or others might suggest to maximize the impact of the Kickstarter?

[20:59] <~Dan> I’m not really an expert on the subject, unfortunately. It never hurts to see if you can stir up conversation on forums.

[20:59] <+SirGene> I have been told small burst of advertising on Facebook is effective.

[21:00] <+HubertLuallen> Thank you, Terry! Every bit of exposure I can get is greatly appreciated!

[21:01] <&GKG_Alan> HubertLuallen, I just ran a kickstarter if you wanna chat about it.