[18:56] <+GrantHowitt> Here’s the intro: Hi! I’m Grant, and that’s Chris. We’re currently Kickstarting UNBOUND, which you can find here – (Link: https://www.kickstarter.com/projects/gshowitt/unbound-rpg/.)https://www.kickstarter.com/projects/gshowitt/unbound-rpg/. Unbound is a universal RPG with an emphasis on group-focused worldbuilding and pulpy combat, and the most exciting thing about it – as far as we’re concerned – 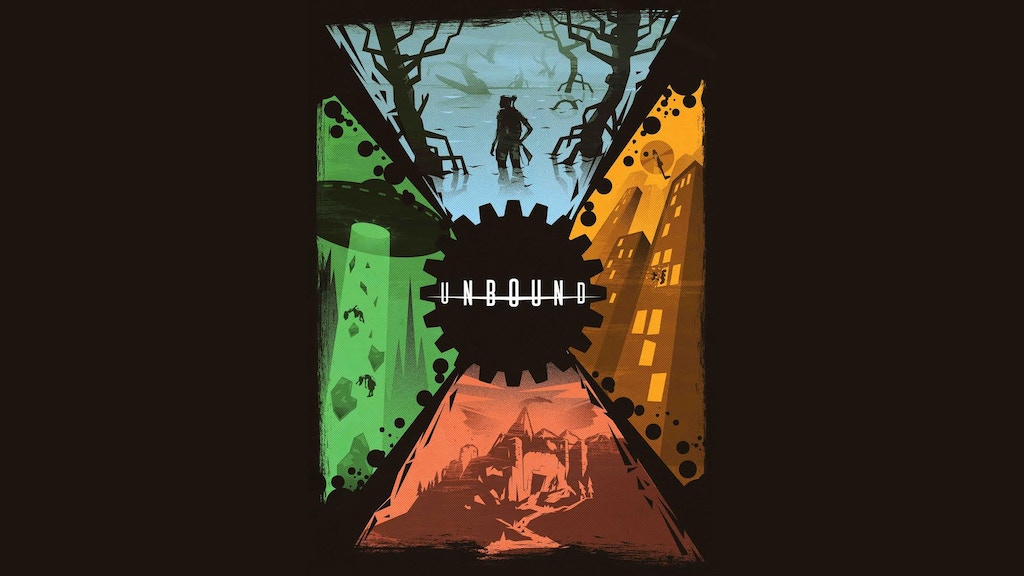 [19:02] <+ChrisTaylor> The basic mechanic is using a deck of cards. The deck represents both your health and your actions during scenes. At it’s simplest level contests are decided by an opposed draw, higher card winning.

[19:02] <+ChrisTaylor> It gets more complicated from there however

[19:03] <+GrantHowitt> mechanically, aye, it’s “who has the higher card” – kind of like opposed dice rolls, I suppose. But we use the additional information on the card, too, in combat – so the suit matters depending on the action type you play it on

[19:04] <~Dan> Now, you said the deck also represents your health… Does that mean you burn hit points in order to take actions?

[19:04] <+GrantHowitt> In addition we’ve got things like scars and stories, which involve you writing on your cards in pen to form a history of the campaign – they tweak the card effects and unlock special bonuses or halve the numerical value

[19:05] <+ChrisTaylor> Think of your deck more as your endurance during a scene. Every action you take tires you a little.

[19:06] <+ChrisTaylor> When your out of cards you are out of the scene. There is a system for permanent injuries (called scars) after the scene is over

[19:06] <+GrantHowitt> But yeah, it’s a timing thing, a war of attrition. Rarely can the players afford to take their time in combat, simply because every turn they don’t heal, some of their strength is consumed

[19:07] <+ChrisTaylor> Our graphic designer is currently making us up a nice one

[19:09] <+ChrisTaylor> Essentially the character sheet is a list of the powers dictated by your choices in character creation. There are also a list of scenes you want to see happen in the game (completing those scenes are how you “level up”) almost everything else is handled by the cards themselves.

[19:10] <+ChrisTaylor> The key to Unbound is that you generate your world, genre and everything about the game your playing, including the plot, during the first session

[19:10] <+ChrisTaylor> So those scenes i mentioned are part of that process.

[19:11] <~Dan> Hmm… Would you characterize this as part storytelling game, then?

[19:15] <+ChrisTaylor> ill quickly knock up a cutdown version then

[19:15] <+Mikki> I’m getting an overwhelming sense of IRC nostalgia

[19:17] <+ChrisTaylor> THREE. Each player picks a role for their character, and one power from that role.

[19:17] <+ChrisTaylor> FOUR. Each player picks a trait for their character, and one power from that trait.

[19:18] <+ChrisTaylor> EIGHT. The GM picks a twist, and creates one fate and two factions to start play.

[19:18] <+ChrisTaylor> those are the basic steps of your first session

[19:18] <+ChrisTaylor> Obviously each step is a tad more involved, but thats the outline

[19:20] <+ChrisTaylor> The core is why your party is all together int he first place. no more of those awkward “you meet in an inn and probably hate each other” campaign starts

[19:21] <+ChrisTaylor> So you can see in the Magi core there are questions to answer

[19:23] <+Mikki> ok. so this seems like SUPER fun. however I needed to this happen about 4hrs ago before I realised it was nearly 1.30 in the morning and I have to got to work today. Sorry all

[19:23] <+GrantHowitt> so whatever stories you tell, they should have big ol’ fights in them

[19:24] <+ChrisTaylor> So if you wanted to played film noir PIs that could be outlaw if they are crooked, or devout if they are goodytwoshoes

[19:24] <+ChrisTaylor> fantasy genre warlocks could be pactbound in they are demonthralls or wild if they are traditional witches

[19:25] <+GrantHowitt> you could also use Warrior for PIs if they’re, say, roped into fighting against the mob

[19:26] <+ChrisTaylor> the system has a really solid combat system that can handle any setting that gets thrown at it

[19:27] <+GrantHowitt> and we try to emphasise that it’s for fair(ish) fights only – if it’s no challenge for one side or the other, you speed up the combat with a dramatic scene

[19:29] <+ChrisTaylor> So combat works with reference to your Role and Trait. Role is how you perform in combat. So a deadeye attacks at range, a protector supports other players etc. Your trait show how you do that. Do you do it with a swarm of ghosts? A honking great sword? Bear throwing?

[19:31] <+GrantHowitt> it’s kind of like a shield bar, I guess? In that it’s a wall of cards in front of your main health deck, and enemy damage comes out of that first – and as long as you have stamina left, you don’t take a serious hit. BUT if you take a hit when you’ve no stamina remaining, it’s automatically upgraded –

[19:32] <+GrantHowitt> – to a wound, which is a big meaty sack of damage. It gives some nice dramatic moments, and encourages players to think about what they’re doing and recharge their stamina

[19:32] <+GrantHowitt> I swear some of my players don’t even know the recover move exists

[19:33] <~Dan> Now, does everyone get the same sized deck? If not, how do you simulate those who can take more damage?

[19:34] <+GrantHowitt> everyone uses the same deck of 52. we do toughness with increased stamina and some useful optional powers

[19:34] <+ChrisTaylor> Some roles & traits have better densenesses than others. a warden has a stamina of 7, while a deadeye only has 4

[19:35] <+GrantHowitt> and then you can bump that up with powers like this one: IRON CONSTITUTION: Always on. When you take a wound, you may gain up to 3 temporary stamina.  Advanced: As above, and all allies in your area gain 1 temporary stamina.

[19:36] <+GrantHowitt> so skills and proficiencies are your basic common-or-garden skills, and they increase the low end of your deck

[19:37] <+GrantHowitt> whereas powers are character options and are generally pretty flashy

[19:38] <+BPIJonathan> I missed the intro, so please forgive me for asking something that has already been answered. What sort of setting is this?

[19:39] <+ChrisTaylor> Hey, its ok. Unbound has you generate everything from the ground up in your first session. When we play we come to the table with zero prep and no idea what world we are going to make

[19:39] <+ChrisTaylor> If you want you can play in an already existing world, but the book assumes you are creating a new one

[19:42] <+GrantHowitt> Johnathan – no, it’s not. It’s all a set of building blocks. I guess there’s an eye to /some/ weirdness, on account of the powers – but the weirdness is up to the players, and the fiction they build around their abilities.

[19:42] <+GrantHowitt> We’re big on reskinning, so we’ve written everything with an eye to fit into as many different times, places and parallel universes as possible with the minimum of effort. (Which was, might I add, surprisingly hard.

[19:43] <~Dan> So are there fixed powers that the players reskin, or are the powers free-form?

[19:43] <+ChrisTaylor> on the subject of reskinning, the book is packed with examples to help s

[19:43] <+ChrisTaylor> the powers are fixed. But you changes them to look however you want

[19:44] <+ChrisTaylor> For example the power “Transform”. In a fantasy game, thats your standard werewolf. But maybe your iron man?

[19:44] <+ChrisTaylor> maybe the nanomachines in your blood change you

[19:44] <+GrantHowitt> Or you have a magical golem that you ride around

[19:44] <+ChrisTaylor> maybe you become a ghoul when the stars are right

[19:46] <+GrantHowitt> if you take a look over the PDFs we linked to earlier, you can get an idea of the sort of powers we use

[19:47] <~Dan> Do you have any sort of scaling mechanic to allow for four-color superheroics, for example?

[19:48] <+ChrisTaylor> It actually doesnt need a scaling mechanic. Because of the way cores unify the party you collaboratively work out a power level for the adventure

[19:49] <+ChrisTaylor> if your superman and want to punch right through a nonsuperhero chap on his way to the shops then thats fine, but its probably not a combat if they cant fight back

[19:50] <+ChrisTaylor> Players have an insane amount of agency in Unbound. They help direct how the world works and even the plot. So everyone is on the same page

[19:51] <~Dan> Right… but not everything would be on the superhuman scale, even in a supers game. Not every superhero is going to be super-strong, for example.

[19:52] <+GrantHowitt> It all comes down to the fiction, you know? It’s more about narrative agency than comparative weight-for-weight power levels

[19:52] <+GrantHowitt> As in: you put Batman and Superman in the same film, they share billing, and they both contribute equally to push the story forward

[19:53] <+GrantHowitt> so bullets are bouncing off Superman’s chest but they’re simply not hitting batman because he’s not there – Superman is punching a tank in half but batman is frying the circuits with an EMP device

[19:54] <~Dan> I see… So they’re both superhumanly capable and are doing the same sorts of things in different ways.

[19:54] <+GrantHowitt> the fictional mechanics of how you do what you do are up to the players. For example, the Brawler in our current campaign never lifts a finger to do anything, and instead relies on a swarm of twenty burly men

[19:54] <+GrantHowitt> our Striker has a truck she drives over people

[19:55] <+GrantHowitt> and the Warden, the toughest of all characters… is lucky? And kind of controls the ancient city-machines in the ruins, and relies on intuition and duplicity

[19:55] <+ChrisTaylor> (all of the above classes are on Grants youtube btw. He streamed the first three sessions)

[19:56] <+GrantHowitt> but yeah, you’ve got it Dan – the scale of the game is what matters, not individual characters within that scale. I’m firmly of the belief that every character can be useful in every situation, if you think hard enough

[19:57] <~Dan> Rewinding a bit, you said that players decide what scenes they want to have happen during the game?

[19:57] <+ChrisTaylor> They do indeed. Step seven of the guide i posted way back there is the creation of Fates

[19:58] <+ChrisTaylor> These are things you want to see happen in the near future. When you have completed three of these you gain access to more power

[19:59] <+GrantHowitt> Generally we encourage players to take achievable fates, because they’re keyed to their experience and level

[20:00] <+GrantHowitt> and you can power-game I guess, sure? You can take “easy” scenes and play through them – but then you’re pushing the plot forward, you’re exploring your character, you’re performing for other players

[20:01] <+ChrisTaylor> Its an interesting way of scaling the length of your game. having “fight someone bigger than me” is a smaller goal. youll bounce through them fairly quickly. Having “I wish to rule the kingdom” makes for a longer campaign

[20:01] <+GrantHowitt> so if you choose the first, that’s telling the GM “please give me a whacking great beastie to kill” and you get rewarded for doing it, which is a nice loop. The second one gives the GM some background, which is nice, and lets them ask questions about the swamp and the beast –

[20:02] <~Dan> Well, I guess I’m wondering about the degree to which the players get to define the setting through fates. In the latter case, the player is creating a creature whole-cloth.

[20:02] <+GrantHowitt> any content the players create means a) the GM didn’t have to do it and b) at least one of the players is automatically engaged with it

[20:03] <+ChrisTaylor> As i said earlier. When we do our first sessions nobody, at all, has done any prep whatsoever. Neither the GM nor the players will even know what genre

[20:04] <+ChrisTaylor> So your deck is not only you health but it supports the history of you character. Scars are permanent wounds that reduce the values of cards. story cards give you access to more face cards (which power you up)

[20:05] <+ChrisTaylor> they affect the narrative when they come up as you physically write an event on them like “twice broken leg” so you can weave it into you descriptions

[20:06] <+ChrisTaylor> which works much the same as the players deck